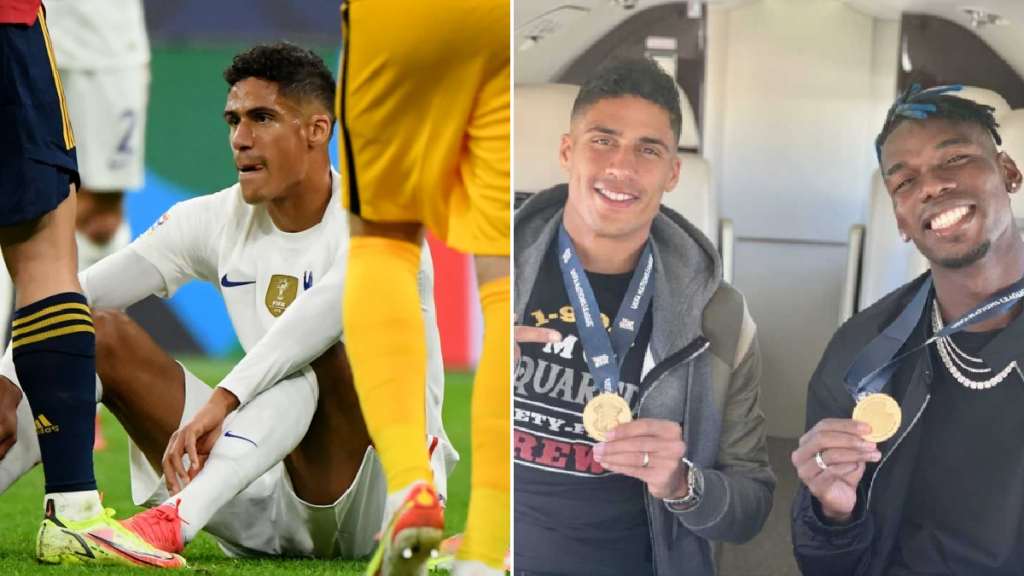 Raphael Varane is not expected to feature in Manchester United’s Premier League clash with Leicester City after picking up an injury while playing for France, according to reports.

The central defender limped out of Sunday night’s UEFA Nations League final victory over Spain just before half-time and was seen with an ice pack wrapped around his thigh as he watched the remainder of the game from the bench.

Varane had grimaced and pulled up while racing back towards his goal to intercept a cross, briefly trying to continue before sitting down on the pitch and signalling that he had to come off.

Now French newspaper L’Equipe report that the first tests carried out on Varane suggest he will need to be sidelined for several days as a result.

The 28-year-old has suffered an injury to his right adductor muscle and is ‘unlikely’ to be able to play against Leicester on Saturday, though United intend to carry out further tests and scans to see the full extent of the injury.

If the World Cup winner has suffered a grade one adductor tear he could be sidelined for around two weeks.

Varane flew back to Manchester with teammate Paul Pogba on Monday and will report to Carrington on Tuesday morning where he will be assessed by the club’s medical team.

They are unlikely to want to risk the former Real Madrid man ahead of a gruelling run of games which sees the Red Devils take on Liverpool, Tottenham and Manchester City over the coming weeks.

But that has created a serious selection headache for Ole Gunnar Solskjaer, who is already without skipper Harry Maguire.

The former Leicester man is not in contention to face his old club after suffering a calf injury against Aston Villa at the end of last month.

Although he has started light training again, Maguire did not take part in full training with the rest of the team on Monday and Victor Lindelof and Eric Bailly are in line to start at the King Power Stadium at the weekend.