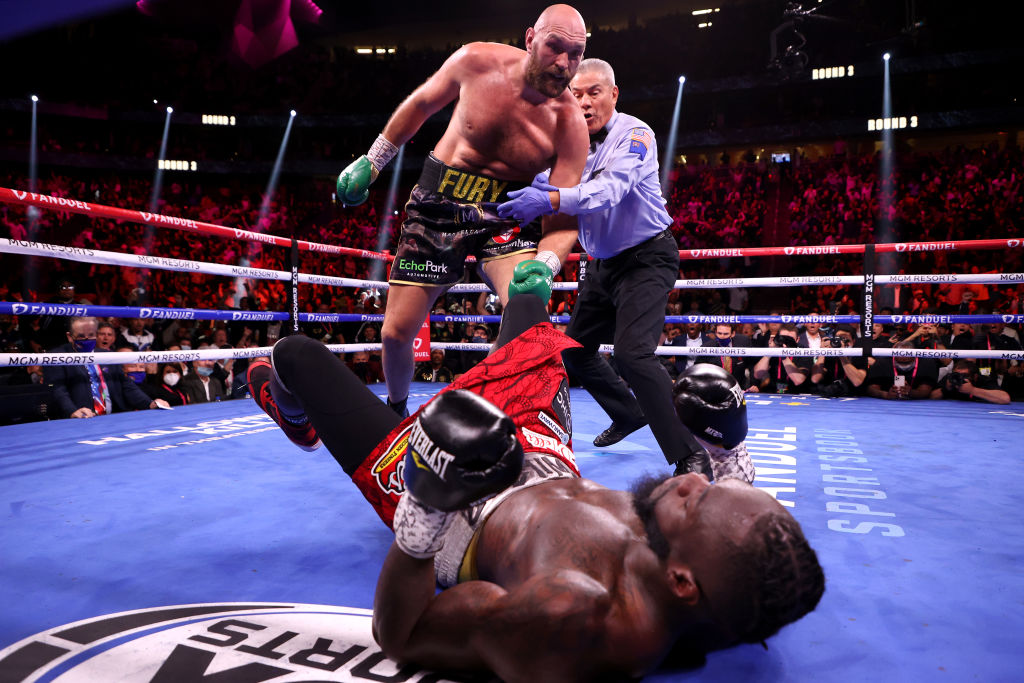 Tyson Fury has retained his WBC heavyweight title after a devastating knockout victory over Deontay Wilder.

In a thrilling trilogy fight that lived up to its billing, ‘The Gypsy King’ was dropped twice in a breathtaking fourth round but again rose to his feet to claim the victory on an electric night in Las Vegas.

An exhausted Wilder, who was also put down in the third round, was eventually finished off in the eleventh as Fury extended his undefeated record in professional boxing to 32 fights.

After being dominated from the opening bell in the second fight, Wilder started smartly and aggressively this time around, sending sharp jabs to the body while looking for big overhand rights upstairs.

Fury stayed calm however and scored with a crunching right of his own in the closing seconds of the round.

The first of series of explosive moments came midway through the third when Fury landed a big right to the temple that sent Wilder to the mat.

Wilder rose to meet the count but his energy was sapped, barely lasting to hear the bell.

An incredible shot from Wilder in the fourth however turned the fight on its head, sending Fury down for just the second time in his career.

Fury’s authority was suddenly gone and the champion was down again in the closing seconds of the round, climbing to his feet again to keep the contest going.

Wilder came searching with those huge rights in the fifth but it was Fury who scored the more telling shots with the challenger expending energy every time he missed.

Fury resumed his composure and having taken a commanding lead on the cards, rocking Wilder again with a thundering uppercut in the seventh.

Shots that had rocked Fury in the early rounds were now bouncing off the champion’s head with Wilder looking exhausted.

Wilder provided a reminder of his power in the ninth, however, catching Fury but with little energy to follow up, Fury continue to stalk and forced him back again.

Wilder was down again in the 10th after a thunderous hook. He bravely rose again and absorbed more damage and somehow roared back, putting Fury under intense pressure before the bell.

His brave challenge was over moments later however with another shuddering shot to the temple ending the contest.