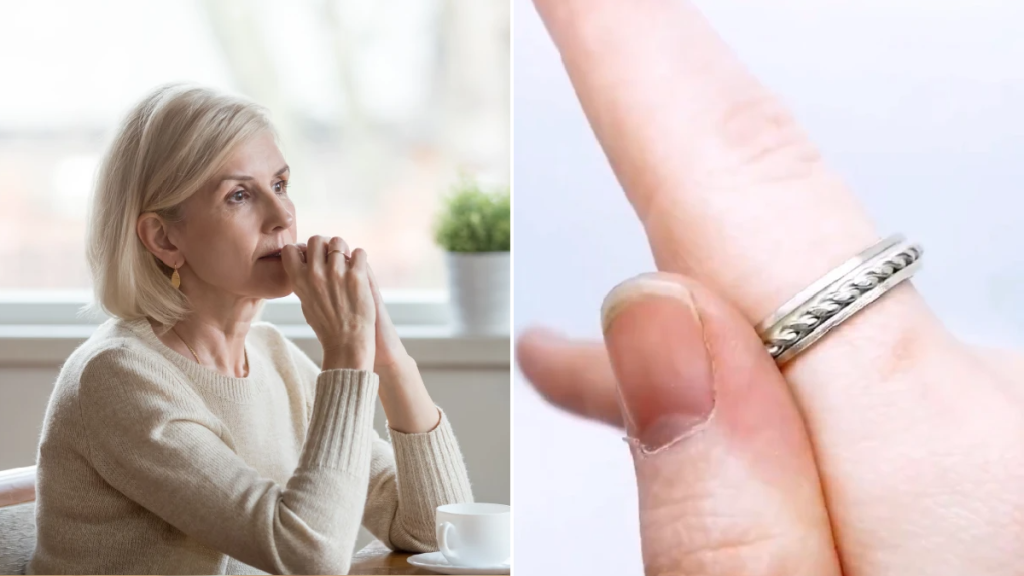 Are you an anxious fidgeter who gets funny looks in meetings for incessantly clicking your pen or tapping your fingers? Then an anxiety ring might be just the thing for you.

These bits of bling are designed to help ease your anxiousness in the most subtle and stylish way possible.

The rings are believed to derive from ancient Tibetan meditation traditions.

But are they actually effective in calming you down, or are they just a fashion fad?

What are anxiety rings?

Anxiety rings look a lot like normal rings, but their special designs aim to combat panic attacks and day-to-day stress.

There are many different kinds out there, with the most popular being ‘spinner’ rings that have a segment in the middle you can spin with another finger.

The idea is that whilst you are spinning or twisting the ring, you’re focussing on that task rather than panicking. It is supposed to help ground you.

Anxiety rings can aid in alleviating symptoms, but there is no scientific evidence to suggest that they help to ‘cure’ anxiety.

Sally Baker, Senior Therapist from Working for the Body, explained to Metro.co.uk that anxiety rings don’t tackle the causes of anxiety – they just redirect the fidgeting.

She warns that this isn’t always a good thing to encourage, saying: ‘Not all fidgeting or compulsive behaviours used as an attempt to self soothe are benign.

‘Even a tiny fidget can become problematic when done to excess which makes me want to address and resolve the causes of fidgeting, and not just suggest ways of fidgeting.’

However, she admits that: ‘anxiety rings could become replacements for potentially damaging fidget habits such as skin picking or hair pulling.’

Baker says that anxiety rings should not replace professional anxiety treatment – if you are thinking of purchasing a ring, it should be alongside help such as therapy and medication, rather than in place of it.

Although the science may not back it up, there are plenty of anecdotal cases where people have found comfort through their bling.

James Bailey, a volunteer at Anxiety UK, told Metro.co.uk that the ring ‘grounds’ him in high-stress situations such as job interviews.

James said: ‘I’ve used a few fidget rings just find it easier to wear one of them for any situation where anxiety is high.

‘It’s soothing and grounding to have it in what I feel are awkward anxious situations.’

He added that he used a fidget ring before his anxiety diagnosis, and found that it made him comfortable enough to seek treatment for his anxiousness.

Dr Paul McLaren, Consultant Psychiatrist at Priory Hospital Ticehurst House, explained to Metro.co.uk that these rings may work for people as they focus their anxious fidgeting.

Dr McLaren said: ‘ We fidget and feel restless when we get anxious. That goes with hypervigilance and being alert to threats.

‘Channelling that restlessness into a repetitive movement such as a fidget ring can help to contain that sense of restlessness and may have a calming effect.

‘If fidget rings do help when we are anxious, it is because they are helping us to contain that restlessness through giving our fingers something to do.’

Ellie Paterson, a jewellery metalsmith and owner of Ellapis Jewellery, said that she started making anxiety rings because her partner was diagnosed with autism, and previously had been diagnosed with General Anxiety Disorder.

She told Metro.co.uk that the rings help not just people with anxiety, but also those with sensory issues and depression, and people who obsessively pick their skin and bite their nails.

Where can you buy anxiety rings?

Due to the rings’ growing popularity, a number of independent sellers have begun making their own.

There are hundreds to choose from on Etsy, averaging £10-£20.

You can also order the rings from Amazon.


MORE : Phoebe Dynevor ‘full of anxiety’ after starring in Bridgerton: ‘I worry about everything’


MORE : Woman has not had a holiday in two years as her pet toucan gets such bad separation anxiety