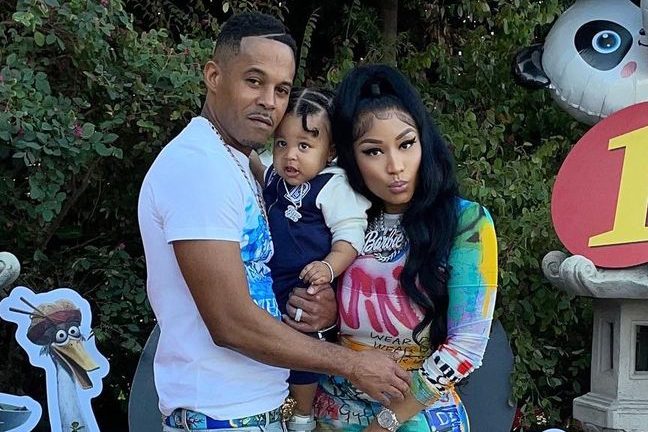 Nicki Minaj has posted a series of adorable family pictures as she marked her son’s first birthday party.

Just weeks after sending the internet into a frenzy with her Covid vaccination tweets, the rapper shared snaps of herself and her husband Kenneth Petty as they took turns posing with the toddler in front of a giant display of Kung Fu Panda themed decorations.

Minaj was wearing an ankle-length body con dress in a graffiti-like pattern accessorised with a Barbie necklace.

Her son was also sporting some bling in a matching necklace with his online nickname, Papa Bear.

Minaj has not revealed her baby’s real name publicly but in the pictures, he was wearing a onesie with the initials CB.

While she shared the pictures with her 159million followers on Tuesday in the caption she explained: ‘On Sept. 30th you turned 1.’

‘Mama is so proud of you, PapaBear,’ she continued.

‘You’re the best boy in the whole wide world. I don’t know what I did to deserve you, but God bless you, son. Mommy & Daddy will never stop loving you.’

In a separate post, Minaj shared pictures of some of the party guests including family.

Meanwhile, in her Instagram stories, she also showed that the Kung Fu Panda theme went beyond the decorations.

The party also featured a bouncy castle, three layered cakes, cupcakes, snacks in Chinese takeout boxes and a dragon made of balloons.

It’s clear that the star did not bear any expense in making her little one’s first birthday special.

In September, Minaj was criticised by Prime Minister Boris Johnson for her stance on coronavirus vaccines.

The chart-topper revealed she was not vaccinated ahead of the Met Gala, a glamorous event in New York known as fashion’s biggest night, which required attendees to have been jabbed.

She also shared an unsubstantiated story on social media about a man who allegedly became impotent after being vaccinated.


MORE : Nicki Minaj raps with a British accent and Jesy Nelson shows off grills as they confirm collab on solo single Boyz