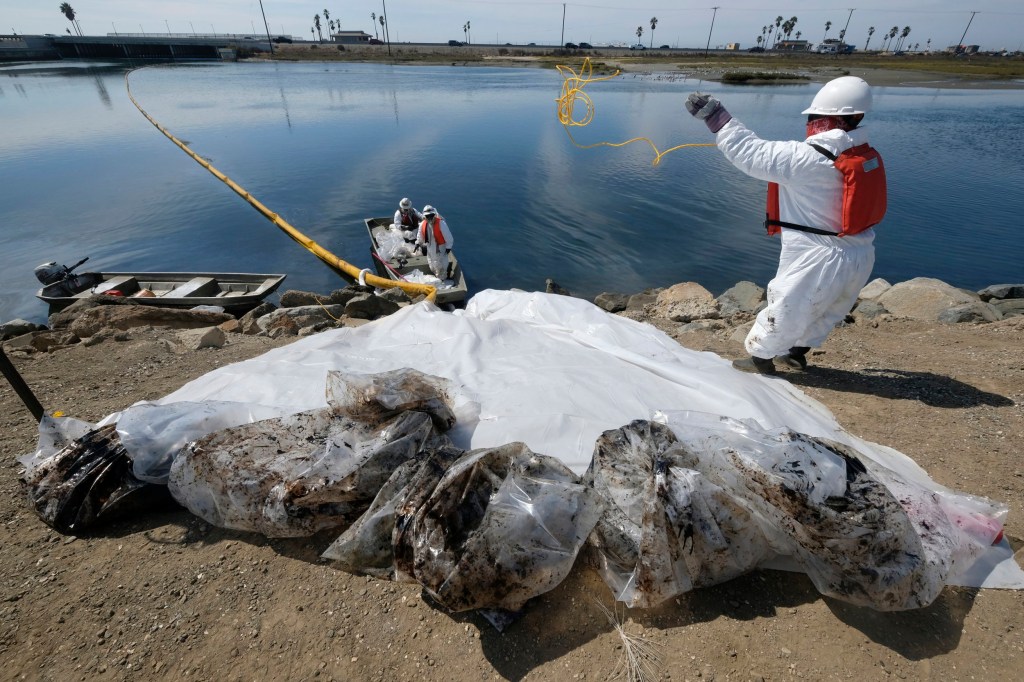 About 126,000 gallons of oil leaked have from an underwater pipeline off the coast of Southern California in what is one of the largest spills in recent state history.

Spotted on Saturday, the spill has coated nearby areas with oil, shut down beaches, threatened wildlife habitats and possibly even harmed people. A miles-wide sheen can be seen in the water.

Crews led by the US Coast Guard deployed skimmers and booms, which are floating barriers, to try and prevent the spill from further seeping into the wetlands and the Bolsa Chica ecological reserve, the Guardian reported.

The spill took place about five miles off the coast of Huntington Beach in Orange County.

Huntington Beach lay empty as public works officials used caution tape to rope the area off from visitors so they could continue the clean up along the beach, which would normally be bustling amid summer-like weather.

Currently, the spill is estimated to be equal to 3,000 barrels of post-production crude oil.

On Sunday, the Coast Guard reported the spill to be about 13 square miles in size.

By Sunday night, about 3,150 gallons of oil had been removed from the water and over a mile of oil boom were deployed, the US Coast Guard said.

It’s unclear when the leak began, but the US Coast Guard first received a report of an oil sheen off the coast of Newport Beach on Saturday at about 9.10am, the Coast Guard said in a press release.

The pipeline is owned by the Houston-based oil and gas company Amplify Energy, its president and CEO Martyn Willsher said at a news conference on Sunday afternoon. The company notified the Coast Guard on Saturday morning when employees were conducting a line inspection and noticed a sheen in the water, according to CNN.

While the spill is one of the biggest in California’s recent history, it pales in comparison to some of the US’s largest such incidents. Those include the 1989 Exxon Valdez oil spill in Alaska and the 2010 Deepwater Horizon spill in the Gulf of Mexico, although the full extent of damage from the Southern California spill won’t be known for several weeks, CNN reported.

The cause of the leak is not yet known, and divers have been inspecting the 17-mile pipeline to try to find its exact source. It’s unclear how long the beaches will be affected with closures and cleaning.

This spill comes three decades after a massive oil leak in the same stretch of California coastline.

On February 7, 1990, the oil tanker American Trader ran over its anchor off Huntington Beach, spilling nearly 417,000 gallons of crude oil. Fish and about 3,400 birds were killed, the Guardian reported.

Huntington State Beach is home to a number of species of birds, including gulls, willet, long-billed dowitcher, elegant terns and reddish egret, which are rare on the West Coast, according to Ben Smith, a biologist and environmental consultant in Orange County.

Smith drove to the beach on Sunday to observe wildlife ahead of a construction project planned at the mouth of the Santa Ana River, which flows into the ocean at the border of Huntington State Beach and Newport Beach.

‘There’s tar everywhere,’ he told the Los Angeles Times. ‘You think by now we would have figured out how to keep this kind of thing from happening, but I guess not.’