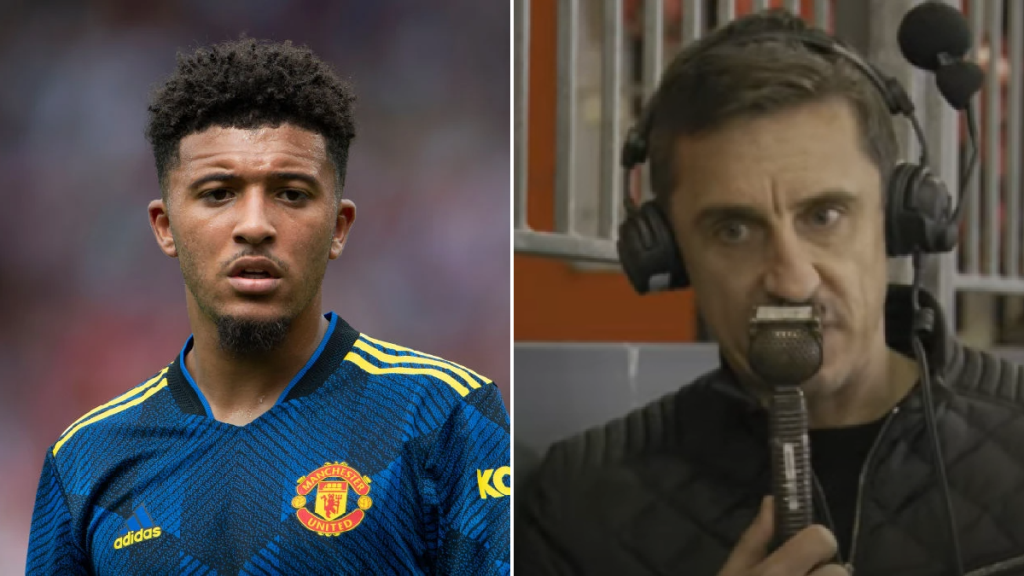 Gary Neville insists he was impressed by Jadon Sancho’s cameo appearance against Everton but admits the summer signing has had a ‘difficult’ and ‘frustrating’ start to his Manchester United career.

Sancho has largely underwhelmed at Old Trafford following his £73m move from Borussia Dortmund over the summer and is still yet to score or assist for the Red Devils.

Neville believes Sancho has been ‘a little anonymous’ at Manchester United, especially as the club welcomed five-time Ballon d’Or winner Cristiano Ronaldo and four-time Champions League winner Raphael Varane to the Theatre of Dreams shortly after his own unveiling.

But the former United and England defender felt Sancho’s cameo against Everton on Saturday was the ‘one big positive’ from the 1-1 draw.

‘You come away from that game and everyone was disappointed, but I thought Jadon Sancho gave his best 20-minute performance in a Manchester United shirt,’ Neville said on his Sky Sports podcast.

‘I thought that was the one big positive from the match. Sancho got on the pitch after a difficult start and I think Man Utd fans are still working him out and still getting to know him, and he’s still working out Man Utd.

‘He’s a £70m signing but he’s been overtaken by Varane and Ronaldo in terms of the publicity and furore.

‘He’s almost slipped into the club and been a little anonymous in the first few weeks, he’s probably frustrated.

‘But I thought he did really well after coming on yesterday and we saw glimpses of his ability, little passes with Ronaldo and stuff like that.

‘So I think it’s worth mentioning that we saw a good little period from him and that was a positive.

‘He will go into the international break with a little bit of confidence and it will send him off in a happier mood than if he hadn’t featured against Everton.’

Sancho replaced Manchester United goalscorer Anthony Martial shortly after half-time against Everton, and Ronaldo came on at the same time for Edinson Cavani.

Shortly after the changes, Everton equalised through Andros Townsend, who proceeded to copy Ronaldo’s iconic celebration in front of the travelling fans.

Following Manchester United’s 1-1 draw, Ole Gunnar Solskjaer said: ‘We didn’t win it so we didn’t do enough to win it. We should have done better and it’s a disappointing goal to concede.

‘It’s happened too many times when we’re on the attack and we’re still well organised enough behind it we just don’t deal with the situation well enough.’