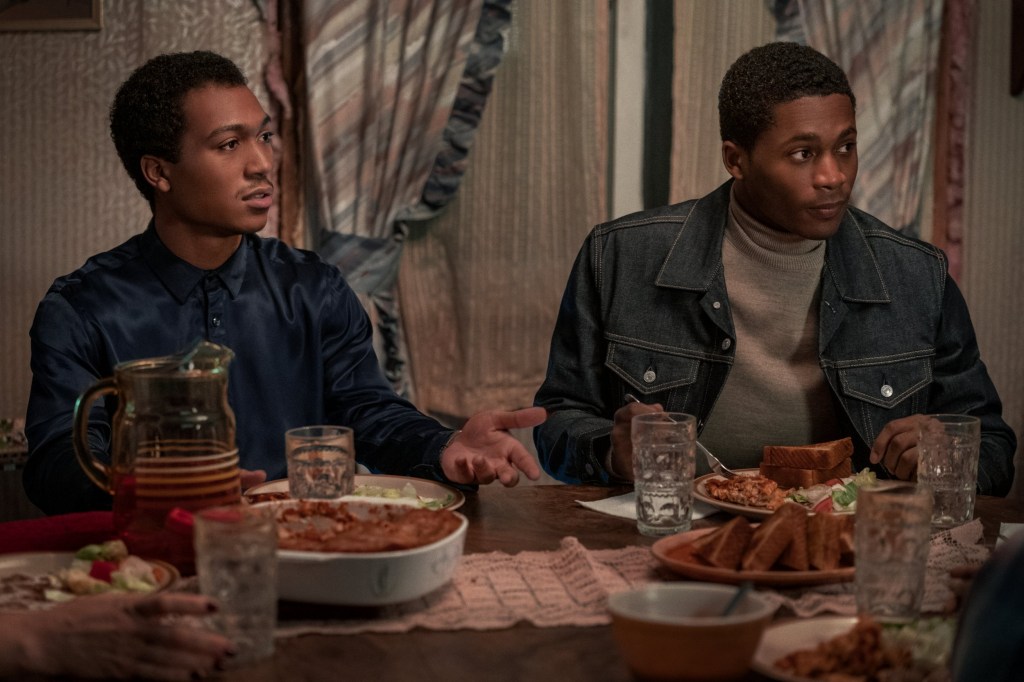 When 50 Cent announced the plans for his latest hit series, BMF (Black Mafia Family), many assumed they would know what to expect from the crime drama.

However, as the credits roll with each episode, it’s clear that the show is more than just a dramatized retelling about the rise of one of America’s most influential crime families.

Indeed, the series is an authentic and respectful showcase about the lives of Demetrius ‘Big Meech’ Flenory, his brother Terry ‘Southwest T’ Flenory, and the loved ones who found their lives forever changed by the actions of Detroit’s infamous drug lords.

With executive producer Fiddy and showrunner Randy Huggins getting the story directly from Big Meech, Terry, and other members of the family, it’s no surprise the series highlights how the brothers’ move into organized crime caused trouble within the family.

For Demetrius ‘Lil Meech’ Flenory Jr, the show truly hits close to home because the 22-year-old actor gets to step into his father’s shoes for his debut role.

Reflecting on the opportunity to see his family’s story shared with the world, he told Metro.co.uk: ‘First of all, there’s not really any family on TV where they’re still living right now and you can watch their story on a show.’

He continued: ‘Everybody has their own opinion about BMF and Big Meech, and they need to see that what they hear about on the internet is not the real story. This is the real deal, this is the origin.

‘This is going back to when they had nothing. They had to make choices because they were part of that environment. They had no other choice.’

The actor added: ‘I hope people understand the soul, and the Brotherhood and the love that was there. And the loyalty.’

For Fiddy – real name Curtis Jackson – it was important to focus on this aspect of the crime duo’s ‘origin story’ before delving into the heights of their success.

He explained: ‘You get a chance to see the innocence and the choices they made because they made them as kids…at 15 years old. Viewers can see their struggle is a universal struggle.

‘And the fact these boys had good Christian parents, parents who were watching their kids make these decisions and not feeling comfortable with what they’re doing.’

Michole Briana White plays Big Meech’s mother Lucille Flenory in the series and explained why she views the first season as a family drama.

She stated: ‘It shows the reality of the fact the boys didn’t come from a broken home or broken family. You don’t often see that when black families are seen on television.

‘We see parents that have done everything that they can to support their boys and their daughter, to give them everything they needed to go out into the world. But the outside world was not there to support them in their community.’

The Reed Between The Lines star continued: ‘They’re struggling so much to survive and to take care of their family. The options there are very limited.’

The 52-year-old explained: ‘You are able to see more than just one side of the story… I hope people can have a deeper understanding of this real family and where they come from and have compassion and understanding.’

The actress felt fortunate to be able to turn to members of the Flenory family to learn about their lives as she continued: ‘It was just incredible. Working with Lil Meech and him telling me more about his grandmother, who I’m playing, was just amazing. Nicole Flenory also provided all these different sides of the story so it all just fed into my character.’

Russell Hornsby stars as Big Meech’s father Charles Flenory, and he explained how he was drawn to the role because the show took time to create ‘three-dimensional characters’ in its retelling of the story.

‘You’re always looking for that human touch in the characters that you play,’ he explained. ‘I really respect Randy for making a big part of the series be the parents and their influence and their presence in their kids’ life.

‘I was really just shocked by the amount of heart that is in the show. Showing the emotional toll and the conflict that a lot of the characters go through are so important. It’s what we need to see with Black shows and Black stories. We do more than just glamorizing the hustle and hood… that was important to me.’

‘The country has failed them in the same way it failed countless other people in America, and they did what it took to make it.’

The Flenory brothers ran a successful drug ring with over 500 employers who distributed $270 million worth of cocaine across cities in 11 states including Detroit, Atlanta and Miami.

Their empire came to a halt in 2005 when authorities arrested the brothers along with 100 co-conspirators for drug trafficking and money laundering through Big Meech’s rap label and promotional business, BMF Entertainment.

Meanwhile, Da’Vinchi (who plays Terry Flenory), hopes the series will allow the audience to see the story from ‘a different perspective’ as he told us: ‘I’m excited for people to see them as kids and the fact they are normal human beings who were dealing like big life issues. They had to deal with the cards they were dealt and this is the direction that they went.’

Explaining how the show helps to dispel stereotypes about Black families, he stated: ‘I definitely love the fact that the show highlights how religious the family was. It just lets you know that you could be brought up in a 10 parent household but if you don’t have some of the common resources that certain families have, and some of the opportunities that other families, and specifically Caucasian families in America, have been, then you’re screwed.

‘No matter how many parents you have or how educated your parents are, opportunities aren’t open because of the color of your skin so how are you going to get the money to bust those walls down and make something of yourself?’

He continued: ‘I’m sure the show is gonna provoke thinking for people who aren’t forced to deal with the situation in their lives.’

Scriptwriter Randy Huggins confirmed that the aim of himself and director Tasha Smith was to ‘elevate’ the way Black stories are told.

‘I was really trying to do a TV show to elevate the landscape of television, especially from urban perspective,’ he stated. ‘Tasha’s pitch was that she wants to romanticize our story, the same way stories of the Italian mob do in the Godfather or Goodfellas. Those dudes in the italian mob are seen as heroes.

‘We wanted to make it clear that the characters in our series are just as fascinating and just as compelling. They’re not just crooks and street guys, they were businessmen…

‘You don’t have to agree with what they did but you understand the decisions that these brothers were making at that time.’

BMF airs Sundays on Starz in the US and is available on STARZPLAY in the UK.


MORE : BMF showrunner reveals role 50 Cent turned down – and his brilliant suggestion for a replacement