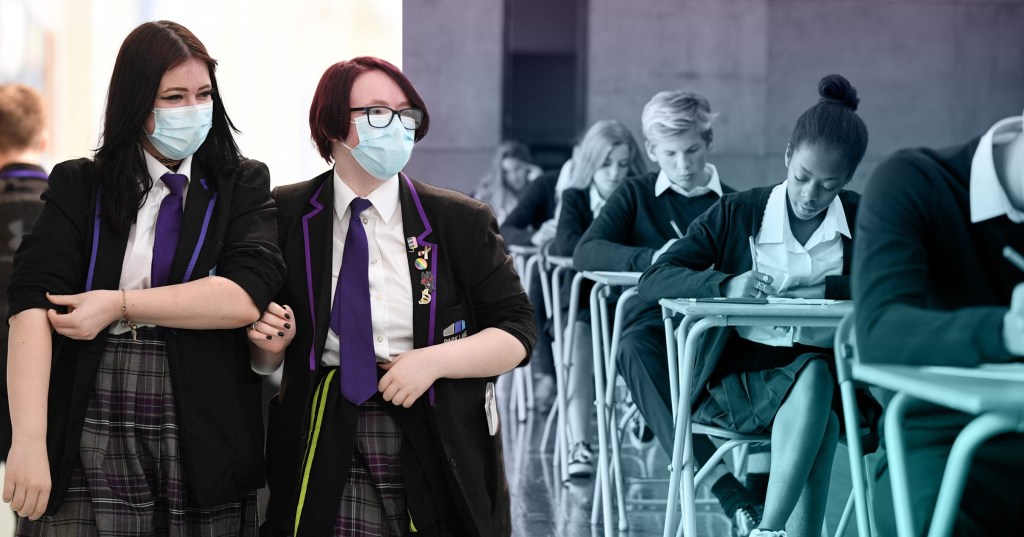 GCSE and A-level pupils taking exams next year are expected to get higher grades than before the pandemic once again – but results are expected to drop to normal levels by 2023.

The Government said a ‘safety net’ will be provided for those who missed classes due to Covid, as it unveiled its 2022 plan today.

Youngsters are set to be given a choice of topics in exams like English literature and history, and be offered support materials in others including maths and physics.

For subjects where a choice of topics is not provided, advance information on the focus of exam content will be given in early February to help them with revision.

Lenient grading will be provided to reflect a midway point between the 2021 and 2019 results.

Next summer’s results are likely to be higher than back in 2019, it is understood. But they won’t be quite as high as the record results seen this year, which were blasted as ‘grade inflation’ by critics.

Some experts claimed the system had ‘descended into meaninglessness’ as almost half of A-level grades were awarded an A or A* in 2021.

A total of 30% of GCSE entries also gained grades 7 and above – equivalent to A and A* – after exams were cancelled for the second year running.

The Government and Ofqual have published proposals for using teacher-assessed grades as a contingency measure if exams cannot run next year.

Education unions have criticised the new plan, saying giving advanced information about exam content in the spring will be too late for teachers to prepare pupils – resulting in a ‘disproportionate impact on disadvantaged students’.

The joint general secretary of the National Education Union, Dr Mary Bousted, has said the Government’s decisions for exams in 2022 will not ‘allay the anxiety or answer the questions’ that many teachers have.

She said: ‘Only giving advanced information about the exams in time for revision will result in a “topic lottery” where some students will have happened to have covered the topics on the exam in sufficient depth and others may well have not.

On grading plans, Dr Bousted added: ‘The Government and Ofqual are picking an arbitrary number out of the air in order to determine how many of each grade will be issued next summer.

‘Such a random act undermines their argument that exams are the fairest way to assess students.’

Meanwhile, Paul Whiteman, general secretary of school leaders’ union NAHT, is concerned schools and colleges will not be given advance information on exam content to help with revision until February 7.

Girl, 12, bullied at school after losing all her hair during cancer treatment

But Education Secretary Nadhim Zahawi said minister had ‘put fairness at the heart of our approach and listened to pupils, teachers and parents’.

He added: ‘The measures we’re putting in place will help reduce the impact of the significant disruption this group of young people have had to face – allowing them to move on to the next stage of their lives.

‘We are committed to rigorous standards being fairly applied, and exams are the fairest way to assess students, which is why they will take place next year.’

Dr Jo Saxton, Ofqual’s chief regulator, added that the plan will ‘ provide a safety net for those who might otherwise just miss out on a higher grade, while taking a step back to normal’.

A consultation on proposed contingency plans will run until October 13.