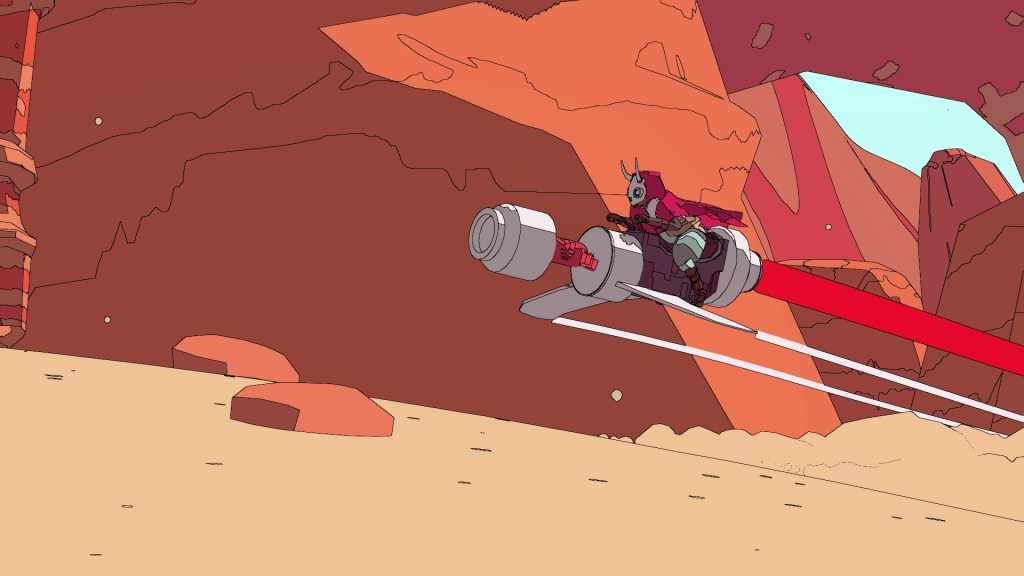 A two-man indie team offers up a sci-fi equivalent to Zelda: Breath Of The Wild, with no violence and some of the best visuals of the year.

If there was an elevator pitch for Sable, and there probably wasn’t because this is an indie game, it must surely have been: ‘Imagine Zelda: Breath Of The Wild but with no fighting and only exploration’. Considering how many hundreds of hours the average Zelda player has put into the game that’s a pretty compelling proposition, even if it doesn’t seem like the sort of thing a small indie developer would have the resources for.

With roughly a thousand caveats though, two-man British developer Shedworks (you can guess why it’s called that) has pulled it off. Sable is an incredible achievement for such a tiny team and while there are serious issues with almost all elements of the game, the one piece of unequivocal praise we can give it is that it has some of the best graphics of the year so far. And that’s only the second indie game we’ve said that about this month.

Sable casts you as a young woman coming of age in a small community of nomads, on an unnamed desert planet. It quickly becomes obvious what the back story of the world might be, as soon as you start discovering crashed spaceships scattered across the landscape, but that’s not really the focus of the game. In fact, there is no focus for the game, which is the whole point of it.

As the titular Sable you have to take part in a ritual called the Gliding, which not only refers to the ability to project a bubble of energy that lets you slowly float to the ground (the equivalent of the paraglider from Breath Of The Wild) but is a vaguely defined rite of passage that basically just involves forging out on your own and having adventures.

After a tutorial-esque opening, where you’re told exactly what you need to do and how the, very minimalist, controls work you’re given a rickety speeder bike and advised to visit the next town over. Other than that, everything is up to you, including finding places of interests and picking up missions. Sable is essentially the anti-Ubisoft game; in that you’re never told what to do and your map is obstinately empty until you happen across something of note.

That may sound all very appealing in these days of overly tight handholding but not only does this mean you can drive around for ages without seeing a single interactive object but even when you do alight upon something that seems significant it often isn’t. Maybe you’ll find a trivial amount of in-game currency or a piece of sellable scrap but more often than not all you’ll discover is an empty building or a lone human who does nothing but sell you parts for your speeder or a new piece of clothing.

Everyone in Sable’s world wears a mask, which is probably because Sledworks haven’t got the tech to do facial animation but in context is used to reflect the game’s main theme of finding yourself and choosing your own role in life. This is literally what Sable’s doing, as she talks to people with various roles such as guard, mechanic, and scavenger. Perform tasks for them and they’ll give you badges, get three badges and they’ll give you a mask to complete your outfit which does… absolutely nothing.

That’s not strictly true, in that you use masks to complete your Gliding, but in gameplay terms it offers no new functionality. Sable is a game that seems firmly opposed to rewarding you for anything you do. Again, this may be a purposeful riposte to mainstream games rewarding you for merely looking at the controller, but this is a classic case of going from one extreme to the other.

Part of the problem is that in gameplay terms Sable is just not very interesting. The platforming is similar to Breath Of The Wild but it’s a desert planet, so you’re never in danger of falling off in the rain. However, the climbing rarely involves any clever platform design and success is primarily dependent on how big your stamina meter is (which, again, works just like Breath Of The Wild). The meter can be increased by collecting special eggs but judging whether you have enough energy to climb a structure before you start is the only real skill being tested.

There are puzzles in Sable but rather than the game being dedicated to Zelda style cleverness they’re all pretty basic. There’s a line of mildly complex ones in the spaceships, and a few one-offs (one of which we beat without having any clear idea of what we were doing) but in general it’s all just as simple as the platforming.

It’s hard to say whether the game even counts as easy, as you can’t die and there’s no one to fight, but it certainly is repetitive, with your excitement at finding something to do often tempered by it falling into one of a handful of mission types: collect some beetles, unlock a ship log, drive through some energy rings in the desert, etc.

The final problem is that the game is filled with bugs, and not just the six-legged kind. The camera system is so easily confused it feels like it’s teleported in from 1999 and glitchy collision detection and physics further sours the experience. Your speeder is actually pretty slow – even the fastest model – which is frustrating enough as it is, but upon hitting an object it will also frequently launch itself into the air or upend itself, nose to ground, and try and bound around like a pogo stick.

As frustrating as the driving is, Sable does have one saving grace: the visuals. Inspired by Jean ‘Moebius’ Giraud the game looks absolutely incredible, with wonderfully organic curves and details that makes it look like a French comic book come to life. It might not be so obvious from still images but even hours into the game we were still staring, open mouthed, at the game’s stark beauty.

That’s not to say the visuals are perfect though, apart from some pop-in issues the game uses a weird animation style for its characters that makes it look like they’ve only got a handful of animation frames. We think this is purposeful, and not a bug, but it’s very ugly and it seems at odds with the rest of the game’s graphics.

NBA 2K22 is a great game but the microtransactions are disgusting

The other problem is that as the in-game timer turns to night all the colour bleeds out of the game until it’s almost monochrome. Which is all very clever, and a common technique in comic books, but the colours in daytime are so stunningly beautiful it’s hugely frustrating to spend half the game without them.

Shedworks has done some incredible work here – the game world might not be as large as Breath Of The Wild but it’s still huge and the visuals never stop being impressive. It’s also hard not to appreciate what the developers are doing with the gameplay and structure but at some point they needed to take a step back and ask themselves whether what they were building was in any way entertaining and, unfortunately, the frequent answer to that is no, it isn’t.

In Short: A stunning visual style can’t hide the fact that Sable is not only uninterested in guiding its players but it doesn’t really care about entertaining them either.

Pros: The graphics are incredible and unlike any other game. Impressively large open world and the refusal to handhold is refreshing, even if it is taken too far.

Cons: None of the gameplay is much fun, with the speeder in particular being a chore to drive. Lack of structure and tangible rewards becomes very dispiriting. Lots of bugs and glitches.