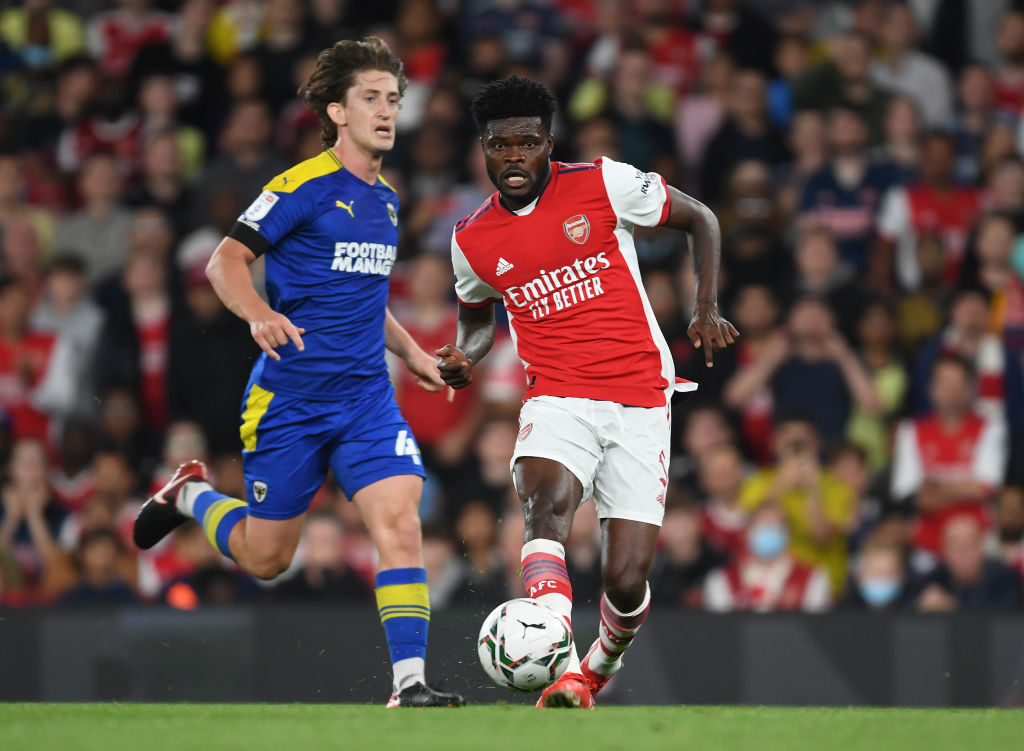 Mikel Arteta said Thomas Partey ‘demanded’ to be named in Arsenal’s starting XI against AFC Wimbledon in order to build up his fitness ahead of the side’s clash with bitter rivals Tottenham.

Alexandre Lacazette, Emile Smith Rowe and Eddie Nketiah netted at the Emirates as the Gunners beat their League One opposition 3-0 to book their place in the fourth round of the Carabao Cup.

Shortly after the one-sided tie, Arteta’s men discovered they will face Leeds for a place in the quarter-finals of the competition.

As expected, Arteta rung the changes as ten players dropped out from Arsenal’s recent win at Burnley but there was some surprise as Partey continued his run in the side so close to the north London derby.

But the Spaniard defended his decision to risk Partey from the start, with the midfielder determined to shake off the effects of an ankle injury which ruled him out of the start of Arsenal’s season.

‘He needs games and he needs rhythm,’ Arteta told Sky Sports shortly after the final whistle.

‘He was demanding to play because he believes that he is still catching up a little bit.’

There were fears Partey had suffered another setback as he was replaced by Smith Rowe in the 60th minute, but Arteta reassured supporters the Ghana international had come through unscathed.

Asked if it was always his plan to give Partey an hour, Arteta replied: ‘Yes it was. He hasn’t played a lot of minutes since he’s been injured.

‘We believe that the rhythm of matches is nothing like any training session.

‘He was so willing to play so I think it was very beneficial for him.’

On whether it was a risk to start the ex-Atletico Madrid man, Arteta responded: ‘We didn’t think so and that’s why we made the decision to play him.

‘But there’s always a risk when you play a match or when have a training session with the intensity that we train.

‘We believe it was the right thing to do and he was really pushing for it so I think it worked out well.’

Arteta felt Wimbledon gave his side a ‘tough game’ until Smith Rowe and Nketiah put the hosts out of sight with a pair of quickfire goals.

‘While we were 1-0 up obviously they’re still in the game and then in a situation in a set piece you can concede a goal,’ he added.

‘We knew that we had to close the game down, we did that at the end and it looked comfortable. But obviously it’s always a tough game.’


MORE : ‘I’m so proud of this kid’ – Mikel Arteta hails Eddie Nketiah and reacts as Arsenal are drawn against Leeds