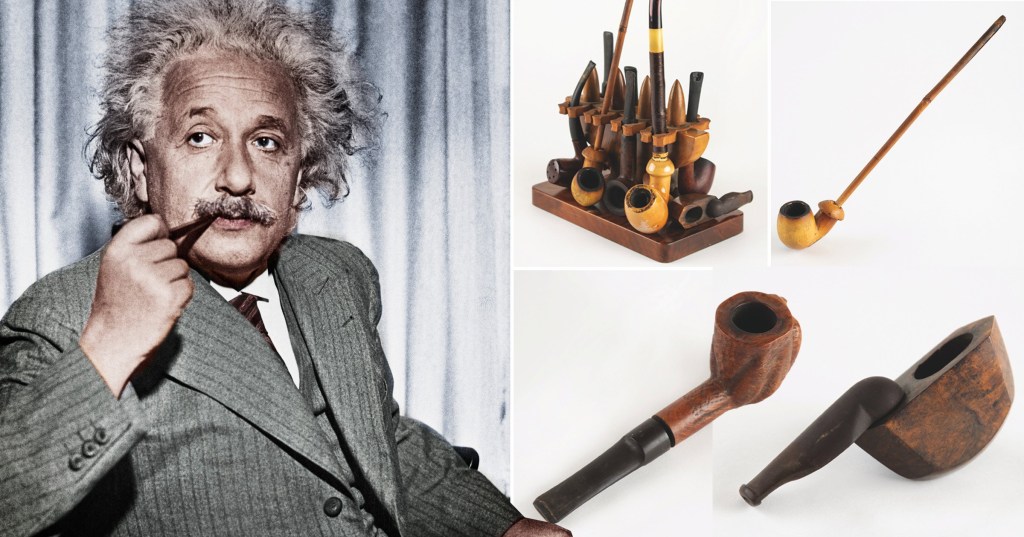 Albert Einstein’s beloved smoking pipes are set to go on auction for at least £36,000, along with several other items belonging to famous names.

The German genius is most recognisable in pictures showing him with his hair messed up and puffing on a a wooden pipe.

Indeed, when he joined the Montreal Pipe Smokers Club in 1950, he said: ‘I believe that pipe smoking contributes to a somewhat calm and objective judgment in all human affairs.’

Even when he cut down on smoking, on the orders of his doctor, he would ‘smokelessly cradle the bowl in hand or clench the stem between his teeth while he did his deepest thinking’.

‘He could not bear to give up the tactile experience,’ said Bobby Livingston, Executive VP at RR Auction, the Boston-based company that is holding the sale.

The Nobel Prize-winner’s nine pipes will be sold alongside a wooden, menorah-style holder which Einstein used for display and easy access – seemingly showing homage to Einstein’s Jewish heritage.

All but two of the pipes are simple and rustic, leaving a pair of decorative pipes for any more extravagant buyers.

Mr Livingston described them: ‘One has a carved owl design, perhaps given to Einstein as a gift symbolizing his wisdom, and another white pipe features an intriguing design of a foot kicking a ball.’

On top of these pipes, buyers have until September 25 to buy the belongings of several other legendary figures.

This includes John F. Kennedy’s diary from his 1945 summer travels through post-war Europe, showing his notes on the charred remains of Hitler’s bombed-out bunker in Berlin

The former US president also wrote about what he saw when he followed Winston Churchill during his reelection campaign, his travels to Ireland, France, and the Potsdam Conference in Germany.

‘This incredible manuscript reveals his insightful views and predictions of the world around him at an early age – a man who would, sixteen years later, become America’s 35th President,’ Mr Livingston said.

Going for a bit less is Anne Revere’s Best Supporting Actress award for her performance in National Velvet is tipped to sell for £110,000 in the same auction.

Mr Livingston said: ‘This trophy, awarded for her part in the classic horse racing film, represents her only win.

‘A direct descendant of the patriot Paul Revere, she was steadfast in her ideals and stood in vocal opposition to the House Un-American Activities Committee-a stance that effectively ended her career in movies.’

A handwritten poetry book from Bonnie Parker – of the infamous Bonnie and Clyde – penned in 1932 while she was jailed in Texas, is estimated to sell for £36,000.

Mr Livingston said: ‘This was Parker’s first and only arrest, and she stewed in jail for about two months before being released on June 17th, after the jury failed to indict her.’

For more information on the auction visit rrauction.com.