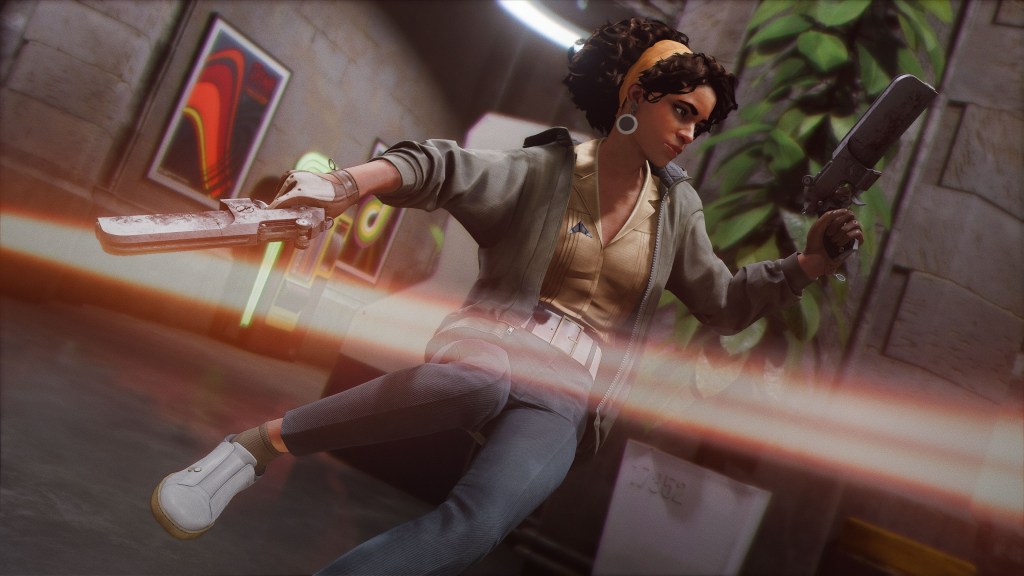 The Thursday Inbox is intrigued by the sound of superhero game Batman: Citybuilder, as one reader is unimpressed by Star Wars: Hunters.

Less than perfect
So this situation with Deathloop is an odd one. I don’t remember a game in recent memory getting so many 10/10 scores and yet still ending up with such a relatively unremarkable Metacritic score (88 as I write this). Nobody seems to hate it, but I really don’t see any justification for the very highest scores in any of the reviews, especially not now I’ve put a good six hours into it.

I already had the game pre-ordered and so was naturally upset to see GC’s review but decided to plough on, as it wasn’t completely negative by any means. What I wasn’t prepared for though was just how much the game spells out what you have to do at every point. You can try and figure out another way, I guess, but there never seems to be the need or even really the opportunity.

You can certainly approach situations differently in how you attack people but the opportunities to ambush the visionaries are extremely limited, to the point where there’s no real choice in anything but tactics. It’s really not what I expected. It almost feels like playing a game with the GameFAQ guide built in already.

For a PlayStation 5 exclusive the performance is really bad too, with lots of screen tearing. And the masks everyone’s wearing are indeed a really bad idea.
Terry Gold

20/20 vision
Reading through your Inbox today got me thinking about Two Mack’s comments and your reply about Deathloop and 10/10 scores. What games now, in hindsight, would you give 10/10 scores to?

Maybe there’s some classics we should have a go at?
notoriouschucky (PSN ID – feel free to add)

GC: That we didn’t give a 10/10 to before? None that come to mind. Outer Wilds is the most obvious one that we regret not marking higher, but we wouldn’t give it a 10. Although this does give us an idea for a future Hot Topic…

Softening the blow
I picked up Deathloop from Curry’s with a pre-order discount, which dropped the price to £42. It softened the blow as my opinions on it are in line with the more honest review scores out there and not the ridiculously hyperbolic ones.

Plenty of good ideas but they seem to be submerged in some pretty bad ideas that certainly are hindering my enjoyment of it. The one thing it has shown me is that Returnal is still by far my game of the year. There’s still time for that to change (next game on the list is Chicory: A Colourful Tale) but it’s really going to be tough dislodging it.
Andee
PS: The silence around Kena: Bridge Of Spirits is pretty worrying. Has GC been sent a review copy yet?

Marvel’s Cooking Vision
Regarding the Nvidia leaks article; I always enjoy stories such as that, as more often then not they turn out to be true (apart from those regarding Nintendo). The one that really sounded interesting to me? Batman Citybuilder – the game I didn’t know I needed in my life.

I’m not sure how it would work in practice, hopefully not some sort of Freemium mobile title. It did get me thinking that I’d like to see more interesting ways to use well known licences outside of action games. With Marvel’s Midnight Suns on the way, maybe we are in for some new combinations of game and licences they we won’t expect? The Sims: Avengers next? Batmobile racing? Could that be an idea for a Hot Topic?
Hollinho (PSN ID/Twitch)

GC: Everything from that leak was for PC, so while we know what you mean the chances of it being a cheapo mobile title are very low.

This not the way
I love GC’s obvious contempt for Star Wars: Hunters and completely understand it. I don’t see what the concept or setting has to do with the series at all and it seems very obvious the whole thing could have been, and probably was, designed as something completely different before having the Star Wars licence added to it.

I mean, who gets that licence and decides the thing they should make, based on a beloved series that hasn’t had many games recently, is Gladiator with Sith and Jedi and Mandalorians?

It looks cheap, it looks nasty, and it’s going to be filled with microtransactions. I was worried about when Ubisoft got the licence and tried to convince myself it would turn out okay, but now I’ve much less confidence Lucasfilm knows what they’re doing. Look forward to the total conversion that will be The Division 2: Star Wars Edition everyone!
Pinky

Physical problem
I made a bit of a boo boo when I backed Psychonauts 2 on Fig, as I backed the PC version on a three year old gaming PC at the time, but the game didn’t get released until six years later and now I have a nearly 10 year old gaming PC with a 1080p screen to play it.

If I had added $18 on at the time I could have got a digital copy for PlayStation 4 or Xbox One but didn’t and now the digital only release is £54.99. So I was going to wait for a sale to get it on PlayStation 5 with my new 4K TV screen that GameCentral readers helped me choose. Thank you for your help to all who gave
advice.

I don’t mind buying digital games but when they are full retail price digital I go for the physical version, but as most people know there is no physical version of Psychonauts 2. Unless at some point I Am 8 Bit release a limited physical version like they did with the first game.
Andrew J.
PS: Speed Brawl and Tharsis is free on Epic Games Store from 4pm on Thursday 16th September.

Expensive upgrade
When I jumped ship from Xbox 360 to PlayStation 4 last generation I was more than happy to purchase a copy of The Last Of Us Remastered because I’d heard a lot about it and wanted to experience for myself, as it turns out it was worth every single penny.

I’m more than certain there will be many people in a similar situation this generation who’ve never played the Uncharted games and personally I’m please they’ll get to experience the enhanced versions of the game first as I did with The Last Of Us.
Russell

GC: Uncharted 4 is backwards compatible and is currently £6.49 on PSN. Why would you pay full price for it again, just to get the sort of upgrade that other games have had for free?

New Dogma
Been nearly three years since last writing in. Life has got in the way a bit, so apologies for that. Anyway, with the Nvidia leak I’m glad to see Dragon’s Dogma getting a sequel. As many can attest, it had many virtues which superseded its other more generic traits. The ability to add other players’ computer-controlled characters to your own party was an excellent idea, and hopefully they will intelligently add to this aspect.

I hope in doing this they don’t go down the route of monetising it though. We live in the social media age, but some of us still prefer the single-player experience without the intrusion of superfluous multiplayer components. The Soulsbourne games get the mix right in this regard and something compelling, but unobtrusive, in the same vein would be great. In addition, hopefully Hideaki Itsuno is at the helm again, as the excellent combat was its other great strength.

Also, to echo TWO MACKS’ comments about the Deathloop review, it is nice to have you as an objective source of reviews in the current hype machine that is the game industry. What resonates is that my opinion sometimes diverges widely from your own, but that is fine if you can see the unprejudiced reality of the criticism.

It is why many of us who have been with Digitiser since the beginning can still find a home here. And so, without wanting to be sycophantic, I would also say keep doing what you’re doing, and maybe some more developer interviews added to the mix if that can be contrived.
Mr Verbosity
PS: Also, to whomever it was that recommended Crossing Souls a while back, thanks for that as it was little jewel of game.

GC: Thanks. We do try with the developer interviews but they’re very difficult to organise during the pandemic – not least because developers haven’t got the time to do them. We had Jon Hare yesterday though and we’ve got another fun one coming up, if we can ever find the time to transcribe it.

Inbox also-rans
So given what they said in their delay announcement are you going to be playing Dying Light 2 in a preview, GC? Very curious what you’ll make it of it as I know you didn’t like the original much.
Cubby

Damn, I knew that Battlefield 2042 rumour was going to be true the minute I saw it. Thankfully the delay isn’t too long but I fear that coming out so soon after Call Of Duty is not going to be a positive for them.
Lars

This week’s Hot Topic
The subject for this weekend’s Inbox was suggested by reader Ishi, who asks what video game franchise do you feel is the most consistent?

A lot of famous franchises have celebrated their 25th or 30th anniversaries recently and are still pumping out new games but which do you feel has been the most consistent across its long history? Have any reached a point where you’ll now buy them on name recognition alone or are you still cautious about each new entry?

What do you attribute the franchises’ consistency to and do you feel it’s kept up well with modern trends? If not, what new directions would you like to see from it in the future?