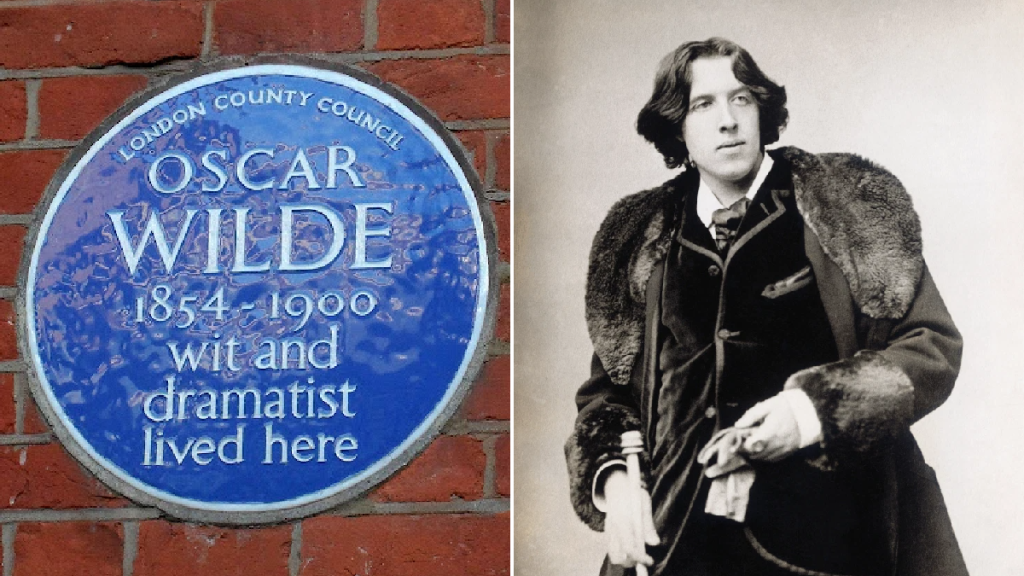 The annual London Pride parade may be cancelled for the second year in a row due to Covid-19, but that doesn’t mean you can’t celebrate the LGBT+ community in the capital this weekend.

A great way to remember queer people of days gone by is to visit their blue plaques, which are scattered around the city.

Run by English Heritage, the blue plaques scheme honours notable people who have lived or worked in buildings across London.

With over 950 plaques in the capital, and only around 20 of them commemorating members of the LGBT+ community, it can be hard to find what you’re looking for.

Worry not – Metro.co.uk has assembled a list of the best blue plaques in London, complete with their locations, for your viewing pleasure.

Oscar Wilde is one of the most famous novelists and playwrights of the 19th Century, best known for writing The Picture of Dorian Gray and The Importance of Being Earnest.

Wilde was the object of major civil and criminal suits involving his homosexuality, which ended in his imprisonment.

Virginia Woolf was an English author and critic, with her most celebrated novels being Mrs. Dalloway and To the Lighthouse.

Despite being married to Leonard Woolf, Virginia carried on several close relationships with women throughout her lifetime.

It is believed that Woolf’s lover Vita Sackville-West served as inspiration for the protagonist of her famous novel Orlando.

Freddie Mercury was the lead singer of British glam rock band Queen – with hits such as Bohemian Rhapsody and We Will Rock You.

Mercury is remembered for being openly queer and flamboyant at the height of the 1980s AIDS crisis.

Pop culture icon George Michael was a British singer, songwriter, and record producer – known for smash hits such as Faith and Freedom.

The Wham singer came out as gay after he was arrested in 1998 for engaging in ‘a lewd act’ in front of an undercover police officer.

Alan Turing is considered one of the founding fathers of computing – and, in 2021, became the first recognised LGBT+ person to be featured on a UK banknote.

He is best known for his work devising code-breaking machines during World War II, and played a pivotal role in the development of early computers, first at the National Physical Laboratory and later on at Manchester University.

In 1952, the British government convicted Alan Turing for his homosexuality, under laws against ‘gross indecency’ – however, he was given a posthumous royal pardon in 2013.

Radclyffe Hall was an English poet and author, best known for the novel The Well of Loneliness – a groundbreaking work in lesbian literature.

Her biographer states that she described herself as a ‘man trapped in a woman’s body’ – this was years before the term transgender was coined.

Kenneth Williams was an English comedic actor, who became a household name after starring in the Carry On films across the 1960s and 1970s.

Although there were speculations about Kenneth’s sexuality throughout his life, the actor famously kept his private life out of the limelight.

However, in letters and diaries of his published posthumously, Kenneth details what life was like as a closeted gay man in a time where homosexuality was very much taboo.

Benjamin Britten was an English composer, conductor, and pianist. His best-known works include the opera Peter Grimes, the War Requiem, and the orchestral showpiece The Young Person’s Guide to the Orchestra.

Benjamin chose to live as an openly gay man in a time and place where homosexuality was illegal – despite knowing it would inevitably damage his reputation and popularity.

John Maynard Keynes was an English economist, whose ideas fundamentally changed the theory and practice of macroeconomics and the economic policies of governments.

Not many people know that Keynes was bisexual, having romantic relationships with a ballerina Lydia Lopokova and painter Duncan Grant.

Keynes was also a pioneer of women’s rights to control their own bodies and of gender equality.

Vita was in an open marriage with her husband and fellow bisexual Harold Nicholson.

Both she and her husband had several consecutive same-sex relations outside their marriage, as was common among the Bloomsbury Group of writers and artists with which they had some association.

Vita engaged in an intense and passionate relationship with novelist Virginia Woolf, until Woolf’s death in 1941.


MORE : Love Island’s Brett Staniland speaks up for LGBT community after being targeted by homophobic trolls: ‘Calling me gay will never offend me’