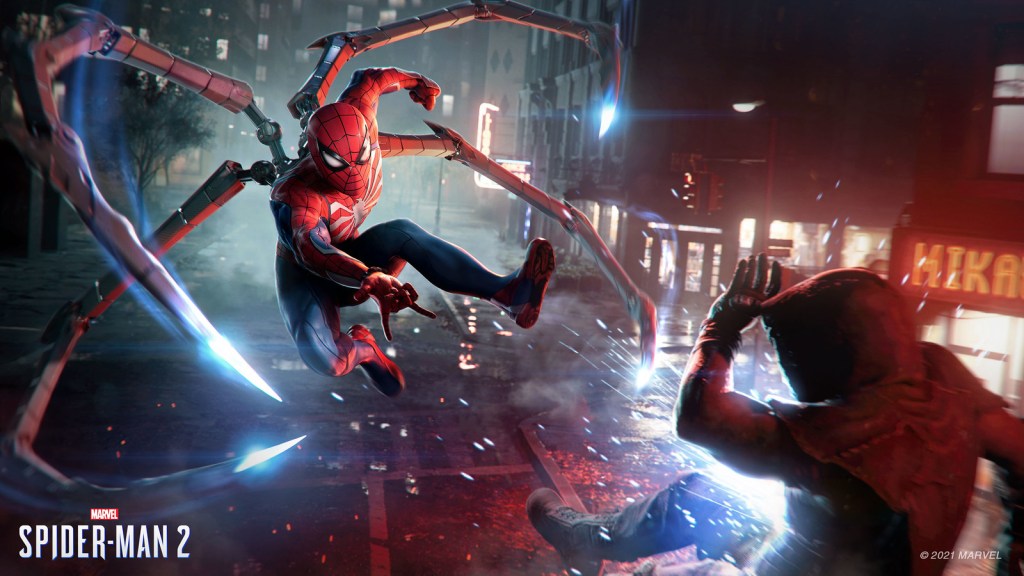 The Friday Inbox seems to have enjoyed Sony’s late night PlayStation Showcase, as one reader is glad AEW wrestling is getting into games.

Good show
I’ve just watched the PlayStation Showcase and overall was impressed with it. It got off to a slow start but picked up with some exciting announcements. We got to see some footage at last of God Of War Ragnarök. Spider-Man 2 revealed. IGN mentioned afterwards that Tony Todd will be voicing Venom, which I think is a good choice.

Can’t wait to play Alan Wake Remastered. Forspoken is one I will be keeping an eye on. Nice surprise seeing that Insomniac are doing a Wolverine game. I would have preferred a new Uncharted game but am happy to play the remastered collection. I was surprised that they have picked Thief’s End and The Lost Legacy and missed the first three games. Unless it is too soon after the remastered collection for the PlayStation 4.

So, yes, for me lots of new releases to look forward to.

On another note, really pleased to see Life Is Strange: True Colors get a positive review from GameCentral and other sites. I am a fan of this series and will definitely be picking this up over the weekend.
Tony–1975 (PSN ID)

Showing off
Very good PlayStation Showcase by Sony. As you say, they’re much better at this sort of thing than Microsoft, even if they do rely on games that are years and years away. That said it’s not hard to be impressed by Spider-Man 2 and God Of War, and landing a Wolverine exclusive is an important win for them.

I really liked the look of Project Eve as well and for a moment thought it was a new PlatinumGames title and Forspoken looked a lot better than I was expecting – although I’m already wishing the main character would shut up. I thought she was a British actress? I wish she’d kept her original accent.

Still not convinced by Ghostwire: Tokyo and the Borderlands spin-off looked pretty bad. Rainbow Six Extraction looks so boring/generic it’s almost funny, but those are third party games anyway, so it’s nothing to do with Sony.

I have zero interesting Gran Turismo 7 but it was impressive to see how good the graphics were. The settings were different enough to Forza Horizon 5 that you couldn’t really make a direct comparison but it’s pretty obvious that the PlayStation 5 isn’t massively behind or anything.
PAlert

Keep ‘em coming
Very good livestream from Sony last night and I’m glad that they take the Nintendo Direct approach of packing in the announcements and trying to keep things as quick as possible. Even though there were games I had no interest in I was quite happy to watch the whole thing as there was lots going on and they didn’t linger on anything for too long.

The Marvel games were perhaps the biggest takeaway and will no doubt show up Square Enix again for the mess they’ve made with Avengers. God Of War: Ragnarök looked good but I inferior to Spider-Man 2, as you could definitely tell it was a cross-gen game with nothing that was obviously better than the last game, in terms of technology, just different locations and situations.

Star Wars: Knights Of The Old Republic Remake being a timed exclusive was a bit weird, and I was surprised we didn’t hear anything about the Last Of Us multiplayer spin-off but overall it was good show. Nice one Sony.
Jackdaw

Waiting for God of War
Just watched PlayStation showcase and was pretty good for me. The only let down for me was Spider-Man. I mean, waiting till 2023, till it’s out, how dare they make me wait! I don’t think I can wait that long.

The other game was God Of War: Ragnarök. I can’t wait to play that but comparing Gran Turismo 7 on PlayStation 5 and Forza Horizon 5 on Xbox Series X It was round about the same in graphics. Maybe I’m getting old, but I couldn’t see any difference. Either way, they both look fantastic and whether it’s Xbox Series X or PlayStation 5, if you’re into racing games you’re going to love them both.
David

GC: If you can’t wait that long what will happen?

AEW No Mercy
In response to gaz be rotten hoping for an AEW video game, he’ll likely be delighted to learn that the wrestling company has had a video game for most major formats in development for over a year! It’s pretty easy to find demo footage of it on YouTube and the like.

The game has had an eight figure sum invested into it by AEW owner (and Jacksonville Jaguars and Fulham FC co-owner) Tony Khan, whilst current AEW World Champion Kenny Omega, a huge video game fan, has had a very hands-on role in the game’s development, which is said to be hugely inspired by the gameplay of N64 classic WWF No Mercy.

There’s no firm release date, but Q1 2022 is rumoured to be clobbering time (a wee wrestling reference there for grapple fans!).
Bingo Rose

Was he right?
It’s currently eight hours until Sony’s eagerly awaited games showcase. While fan theories run wild about which games will be at the show I’m thinking about Naughty Dog.

I’m wondering if The Last Of Us multiplayer might be the replacement for Horizon Forbidden West as the big Christmas game (even though Sony first party games usually avoid that period) and actually launches this year. Here’s my reasoning behind this:

The Last Of Us Part 2 and Ghost Of Tsushima shipped a month apart. June 2020 and July 2020, respectively.

Multiplayer was reportedly developed alongside the main The Last Of Us Part 2 dev cycle.

Sucker Punch have put out the Iki Island DLC since release, while Naughty Dog, the bigger studio, hasn’t put out anything.

The multiplayer could also be shipped in an incomplete state, with the age old PR spin of new modes, new features, and new maps all coming later with a costumer friendly year long roadmap of free new content after launch. Giving them more time to polish whatever else isn’t ready.

Thinking about how many of the assets are already built, maps from already built map sections. Weapons already built, characters models, etc. Plus, they already have the framework and balancing from the first games multiplayer as well as Uncharted multiplayer too. I think The Last Of us multiplayer could even launch as A ‘and you can download it right now’, type announcement at the showcase!!
If not at the show then Im going for a nov 26th release date to get out ahead of halo.

Additional torment
Just a little PSA/mini-rant about Tormented Souls. The game, at least on Xbox Series S, is completely unplayable due to terrible performance and crashes. The latter cost me so many hours’ play that I’ve given up.

My refund was denied because I’d played the game, so I guess I should be clairvoyant. Good job Microsoft. When I finally get my PlayStation 5, your console will be used for RetroArch and little else.
ANON

How to watch the PlayStation Showcase and when it starts

Lego has created a Super Mario 64 ? Block tribute and it looks fantastic

Horse’s mouth
So my friends and I were multiplayer-ing when the WhatsApp message went out that Star Wars: Knight Of The Old Republic Remake was a PlayStation 5 exclusive.

As we are now a multi-console group the feelings were mixed, with a particular Xbox owning mega Star Wars fan left speechless… it’s his favourite game.

The Stadia player stayed quiet (snigger) while the PC player reported rumblings it would launch on PC at the same time.

By the end of the night a check of the PlayStation Blog revealed that, ‘It’s a console exclusive on PlayStation 5 at launch’

Which the Internet, at large, seemed to agree with. I wait with baited breath, for the sake of my friend’s health, for your confirmation one way or the other.

This is why Sony are so good with their marketing. They make announcements that are big enough to break through to people not even paying attention.

The rest of the presentation was fine and confirmed I will have a ton of games in the backlog when I finally pick up a PlayStation 5 in… ooh 2025 when they’re readily available. And Slim, congratulations if you’ve learned to love that look but I still think it’s hideous.

And It really shows up Microsoft again, whose presentations come off more like a Blue Peter episode with people faking human interaction and the high point being my group betting at what point they’ll reveal a new colour scheme for their controller. Woo!

GC: The PlayStation Blog is run by Sony, so there’s not usually any better source.

Inbox also-rans
RE: Christopher Hurst’s email about the comments section vanishing. It’s maybe due to your privacy/cookie settings. I declined a lot of what we were being asked to accept on the page and since then, no comments section. You could use a different browser and accept all the settings and then it should be available on that one. It worked for me.
WoDMaN

GC: If that is the issue then deleting your cookies should also fix the problem.

Just got the latest issue of Edge magazine and the cover story is the new Marvel style XCOM game [Marvel’s Midnight Suns – GC], if anyone is interested. I think the reader Panda is.
Andrew J.
PS: The game Sheltered and Nioh Complete Edition is free on Epic Games Store currently.
PPS: Hope everyone enjoys the PlayStation Showcase, writing this before the show.

This week’s Hot Topic
The subject for this weekend’s Inbox was suggested by reader Cubby, who asks what has been your favourite Achievement or Trophy to unlock in a video game?

It doesn’t matter whether they were difficult or not, but which one did you enjoy doing the most and which did you think was particularly well designed or just had a funny name or concept? What is the secret of a good achievement and which developers are particularly good or bad at them?

What factors encourage you to try and get achievements and what’s the most effort you’ve ever put into unlocking one?