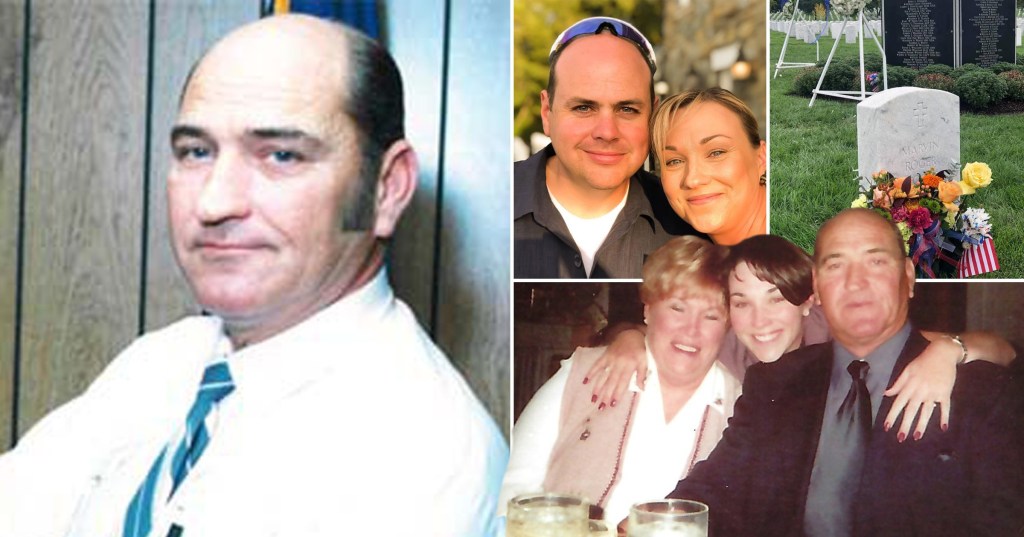 The daughter of a dedicated US Navy chief who was in The Pentagon on 9/11 has told of how he ‘died doing the job he loved’.

Jenn Nicosia said her father, Marvin ‘Roger’ Woods, known as Roger, ‘didn’t know what hit him’ as she spoke publicly for the first time to mark the 20th anniversary of the terror attacks which changed the course of history.

The father-of-three, who spent 27 years in the Navy before retiring and returning to service as a civilian operations manager, was among 184 innocent people killed when the HQ was hit by one of the hijacked aircraft.

Jenn, who was 25 and a recent graduate at the time, lived and worked only a couple of miles from the military nerve centre, where she and her mother would join other families in an anxious wait for news.

She is now a Board Director with The 9/11 Promise, a non-profit organisation helping the children of those lost to the atrocity and other young people whose parents cannot work, as well as honouring those who served the US on the day and afterwards.

Twenty years ago this Saturday, the Vietnam veteran, 57, had been working in a newly-renovated western section of The Pentagon’s Navy Command Centre when it was struck by American Airlines Flight 77 at 9.37am.

Jenn, who at the time lived in Falls Church, Virginia, was about to walk to her office job with the Department of Defense when she saw a TV newsflash about the unfolding events, which would claim the lives of 2,977 innocent people and 19 hijackers before the day was out.

‘It was chaotic at first,’ she said. ‘I remember running to my office where someone told me in the elevator that The Pentagon had been hit.

‘Of course, I was worried about my dad but you never think something like this is going to happen to you. Our building was immediately evacuated because there was so much chaos going on; F18s were flying overhead and people were scared because we were so close to what happened.’

Jenn and her family then made repeated calls to her father’s cell phone before she was told that she needed to get to her mother, Betty, who was at home in Great Mills, Maryland, about 80 miles south of The Pentagon.

‘We still had not been told that he was dead at that point but that’s when we really knew that something was wrong,’ Jenn said.

‘I had just put my mum to bed a little after midnight when there was a knock on the door. It was very much like you see in the movies, a black sedan pulled up with three military officers who informed my mum that my dad was officially Missing in Action.

‘At that point, we knew that he was gone.’

Jenn and her mother went to a makeshift command centre near The Pentagon, in US capital Washington, where they stood in line to give DNA samples and attended hourly ‘body count’ briefings.

‘It was very surreal and while the briefings became normal at the time, looking back now it seems very morbid,’ Jenn said.

‘Everyone of course was hoping their loved one would be found but within a day or two it was obvious there were no survivors left.

‘The wall had collapsed so they had to go through all of the debris to find body parts. It was just a case of waiting for the call and it took about a month before they found parts of my dad.’

The former Navy radio chief was buried at the Arlington National Cemetery in Virginia and Jenn has taken inspiration from his work, pursuing a career in the Intelligence Community.

‘My dad’s military service was very important to him and something he took great pride in, which is why he continued as a civil servant,’ she said.

‘He had military tattoos on his arms and spent his whole life in service of his country. As a family, it was heartbreaking to lose him, but he died doing the job he loved.’

The benevolent organisation is currently running a series of fundraising activities including its annual running events which begin at the 9/11 Pentagon Memorial outside the HQ and end at Ground Zero. Bike journeys also start at the outdoor, two-acre place of remembrance on the way to the United Flight 93 Memorial in Shanksville, Pennsylvania.

Beneficiaries of The 911 Promise’s events include children who have lost parents or whose families are experiencing financial hardship, with funds going towards a programme of scholarships.

Jenn, who lives in Virginia with her husband and 11-year-old daughter, wants to continue the spirit of giving that helped lift her family in the aftermath of the atrocity.

‘So many people from around the world reached out to my mum, a woman that they didn’t even know, to help her,’ she said.

‘If it was a cheque for five dollars or a bunch of flowers it didn’t matter, they wanted to do something. We felt a sense of pride in being American and felt a sense of unity from around the world.

‘I felt that I would continue that spirit of giving and kindness, despite the pure tragedy and how painful it was for so many people. I still find it hard to talk about but The 9/11 Promise has been cathartic and seeing how it helps kids who have also experienced loss has been very healing for me.’

Mr Woods loved his country and would have wanted the US to stand firm in the face of terror threats, his wife has said previously, which have come back into sharp focus with America’s departure from Afghanistan after two decades of operations in the aftermath of 9/11.

Giving her personal view, Jenn said: ‘The last few weeks have been very upsetting and frustrating for me. I want people to remember who was responsible for what happened and that it took a very special kind of evil, not just on 9/11 but with other events too.

‘We have to be diligent and be careful. I don’t think people should walk around in fear but I don’t anyone else to have to go through what we did and to help those left behind.’