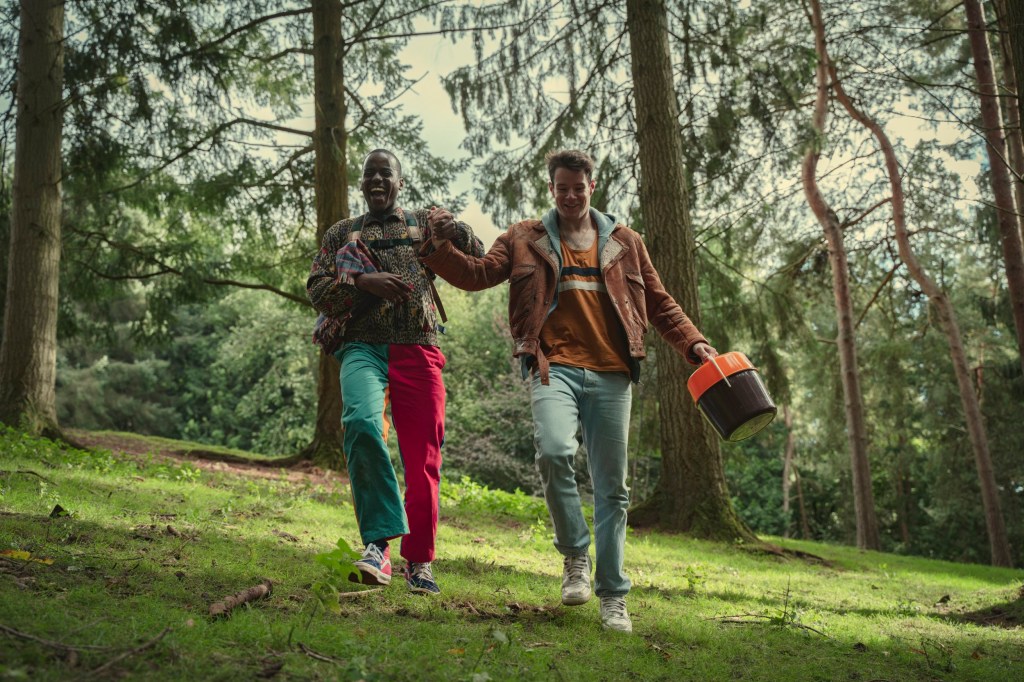 Sex Education’s Eric Effiong and Adam Groff finally go public as a couple in season 3 – but what does the season have in store for the pair?

However, he ultimately decided to choose Adam in the season finale, leaving Rahim heartbroken.

But with Rahim still at Moordale and Adam and Eric now a couple, actor Ncuti spoke about the developments in the pair’s new relationship as they start navigating it together in season three.

He told Metro.co.uk and other press: ‘It was really exciting to play with because obviously we’ve watched the watch the relationship from its consummation in season one.

‘I guess throughout the relationship is very much been dictated by the pace of Adam’s growth.’

He went on to explain how when season 3 begins, we meet back up with the couple after having spent a whole summer in an official relationship.

Ncuti explained: ‘They’re very much like on an equal status in the relationship, there’s not anywhere that any of them can hide behind anymore.

‘Eric can demand, kind of what he wants, which I don’t think he was able to do before and so it’s just the changing dynamic.

‘It’s just quite interesting considering their history and we just see how they grow and how they work through that, because [they’re in] two very, very different places in the sexual and personal journeys.’

The actor also addressed the controversy of the relationship but reminded viewers the pair are still teenagers trying to navigate the situation in the show.

He said: ‘It’s an interesting relationship, because it’s one that’s obviously drawn quite a lot of controversy.

‘When you’re young, they’re both young. They’re both 17 – they were both 16 when they met each other – they didn’t make the wisest choices at 16.

‘But they found each other, and they have this connection and so we just kind of see how their dynamic is constantly shifting throughout the very different paces in a relationship.’

Elsewhere, Aimee Lou Wood realised the similarities between her and Ncuti’s characters, who both go through huge growth in this season through their respective storylines.

She joked: ‘Eric and Aimee [Gibbs], let’s face it, are soulmates. The fact that they haven’t met properly – they’ve not had one word to each other really, they go through like the same thing.

What’s coming to Netflix UK in September? From Lucifer to Sex Education 3

‘For Aimee, she is just becoming braver and braver, and with the same thing, which is, she’s always been a people pleaser, she’s always just wanted people to like her, she wanted to be popular.

‘Both Aimee and Eric are, they make some choices this season and they speak their truth and they learned their truth.’


MORE : Daniel Craig nearly turned down James Bond role: ‘I didn’t want to do it’