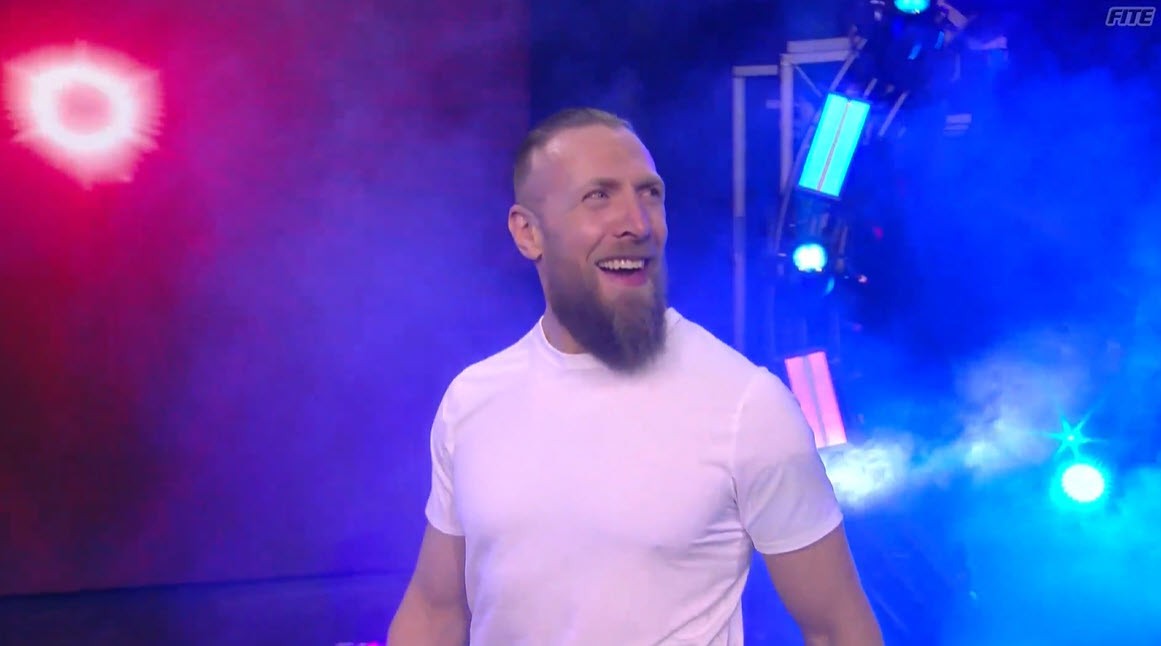 The former WWE superstars both debuted in a rapid double fire to end All Out 2021 on an absolute high and send shockwaves through the entire industry on a night where CM Punk made his long awaited return.

The main event of the night saw Kenny Omega beat Christian Cage in a great bout with the AEW World Title on the line, and in the end the numbers game helped the champ retain.

The Elite jumped in the ring after the bell, attacking Cage and starting to beat him down with Jurassic Express failing to even the odds as Omega trash talked on the mic and claimed no one is on his level and claimed the only people with a chance to beat him either aren’t there or are already dead.

This was the cue for Cole – whose WWE deal expired just weeks ago after his NXT TakeOver match against Kyle O’Reilly – to make his shocking debut and send everyone wild.

He came out to a huge ovation as he seemed to be coming to the rescue, only to take out Jungle Boy and align himself with the faction.

However, there was time for one more surprises as the lights cut out and Ride of the Valkyrie hit, leaving fans beside themselves as Bryan debuted four months after leaving Vince McMahon’s company.

He levelled the playing field and sparked a brawl which he ended after cleaning house – with a running knee for good measure.

Of course, earlier in the night CM Punk won his first match in over seven years as he took on Darby Allin in a clash of generations which delivered on the high expectations heaped upon it.

The former Voice of the Voiceless didn’t look to have missed a step as the pair put on a great show for his hometown crowd in Chicago, and there were plenty of times it looked like Darby would ruin the party.

In the end, it was Punk who picked up the win with the Go 2 Sleep after an amazing final stretch, with a show of respect between Punk, Sting and Allin as the icing on the cake.

The night kicked off with a fantastic opening match between Eddie Kingston and Miro as the latter retained his TNT Championship in a hard hitting bout.

It looked like a new champ was on the cards but Miro kept the gold after hitting a low blow moments after a delayed count had cost the challenger a potential win.

Up next, Jon Moxley beat Satoshi Kojima in another physical match, but the real story here went beyond the three-count and last bell.

As Mox celebrated his win, the legendary Minoru Suzuki made his way out to an incredible ovation, looking ready for a fight as he took the first shot before the two stars traded stiff shots in the middle of the ring.

The brief exchange – a great tease of what’s the come – ended with Suzuki dropping him with the piledriver.

Dr. Britt Baker, D.M.D. and Kris Statlander had one hell of a moment to follow, but they more than rose to the occasion in an exciting match over the AEW World Women’s Title.

The challenger came close with Orange Cassidy having a very energetic outburst to hype her up, but in the end a Panama Sunrise – nice shout-out to Adam Cole – and the Lockjaw was enough to retain the gold.

Up next, the Lucha Bros and Young Bucks put on an instant classic in an energetic, enthralling and intense cage match which highlighted everything that makes pro wrestling so powerful.

The live crowd only added to the action, willing the bloodsoaked Penta and Rey Fenix through every nearfall until the Lucha Bros got the win and dethroned the AEW World Tag Team Champions to an insane reaction, leading to a beautiful moment with Penta’s family.

The Casino Battle Royale delivered after a slow start, with the later decks really add to the field.

The real story here was the debut of Ruby Soho as the Joker entrant, making it to the final two and eliminating Thunder Rosa to earn herself a future Women’s Title opportunity.

Chris Jericho put his career on the line next with a great lesson in storytelling from the moment MJF came out after teasing fans with the old Y2J countdown from the legend’s WWE days.

Jericho’s entrance didn’t quite hit home but the in-ring action picked up as the match went on, eventually culminating in a fantastic finishing sequence which saw MJF pin his rival as he celebrated, arms raised and music blaring.

However, moments later the match was restarted and things heated up with Maxwell eventually falling victim to the Walls of Jericho, while the winner celebrated with his Inner Circle teammates after the bell.

By contract, the result was never in any doubt later in the night as Paul Wight decimated QT Marshall in his All Elite Wrestling debut, hitting chops and stomps aplenty before sealing the deal with a huge Chokeslam.

Between that, a haunting promo from Malakai Black directed at Dustin Rhodes, and the announcement of Moxley and Suzuki for Wednesday’s episode of Dynamite, there was plenty to keep fans entertained and simmering before the main event.

Overall, it was a fantastic show which hit all the right notes.

AEW All Out 2021 results and grades


MORE : Jon Moxley wins GCW World Championship from Matt Cardona in shock appearance one night before AEW All Out