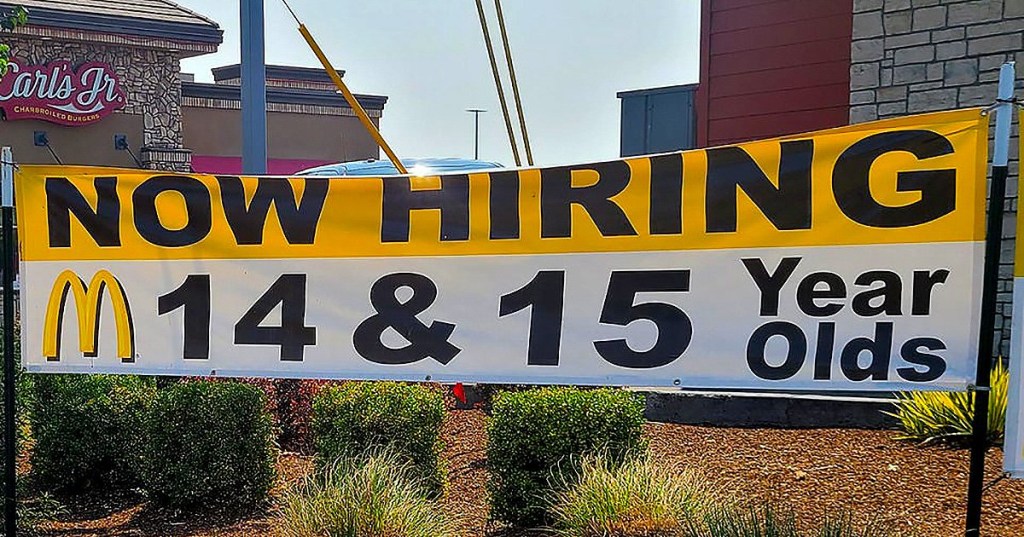 A McDonald’s in Oregon was so in need of workers that it placed a banner outside stating it is hiring 14- and 15-year-olds. While that was just one of many McDonald’s restaurants, the franchises face a federal probe into why their ice cream machines are so often out of service.

The operator of the McDonald’s in Medford, Oregon, Heather Coleman, said ‘there are always staffing issues, but this is unheard of’, referring to labor shortages and turnover. Coleman called young employees ‘a blessing in disguise’.

‘They have the drive and work ethic. They get the technology,’ Coleman told Insider. ‘They catch on really quickly.’

Allowing 14- and 15-year-old to apply to work at her McDonald’s drew about 25 applications in two weeks, she said.

Coleman’s McDonald’s isn’t the only fast food establishment that is looking to hire younger people. The Texas-based chain Layne’s Chicken Fingers is promoting workers who are teenagers and in their early 20s and paying them salaries of more than $50,000 per year at managerial positions.

The US Department of Labor has set 14 as the minimum age for jobs that are not in the agriculture sector, though laws vary by state.

McDonald’s franchises made headlines on another matter this week – with their ice cream machines that are essential to making the McFlurry, soft cones and milkshakes. McDonald’s loyalists are far too familiar with the machines being out of order.

‘I’m beginning to wonder if this McDonald’s even has an ice cream machine,’ a McDonald’s customer in Atlanta tweeted. ‘It’s been “broken” so long that I’m coming up with conspiracy theories.’

Franchises received a letter from the Federal Trade Commission (FTC) this summer requesting information on why their ice cream machines are frequently broken. The FTC declined to comment on the letter, which was obtained by The Wall Street Journal.

McDonald’s said it is aware of customer frustrations over the machines, which are intricate and hard to fix, and is coming up with various ways to remedy the problem. That includes training new employees to do regular maintenance on the machines.