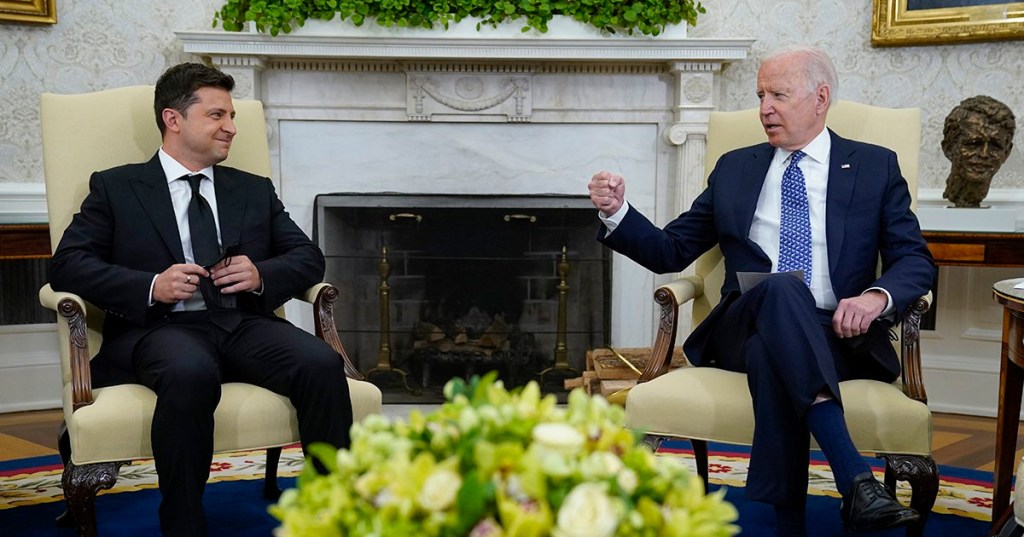 President Joe Biden a day after ending the 20-year war in Afghanistan welcomed the first foreign leader to the White House since the chaotic withdrawal and evacuation mission, Ukrainian President Volodymyr Zelensky.

In the Oval Office on Wednesday afternoon, Biden did not answer questions around Afghanistan or other matters. But Zelensky offered his condolences for the 13 US service members who died in the suicide bombing outside Kabul airport last Thursday.

‘We are very compassionate and we have the fellow feeling for such losses – such tragic loss – because for eight years in a row, as you know, we’ve had this war on the Ukrainian Donbas and we have lost 15,000 of our best people,’ Zelensky said through an interpreter.

Zelensky thanked Biden for inviting him to the White House during ‘difficult times’ for the US, Ukraine and other nations. Zelensky’s sit-down meeting with Biden was originally slated for Monday but delayed after the terror attack in Kabul.

The presidents met six weeks after the Biden administration reached a deal to allow the Nord Stream 2 pipeline between Russia and Germany to be completed. The natural gas pipeline would bypass Ukraine and undercut need for its energy sector.

However, Biden reaffirmed the US’s partnership with Ukraine and committed more than $100million to the Eastern European country to help it defend itself against Russia.

Biden also congratulated Zelensky and Ukraine for recently reaching 30 years of independence from the Soviet Union.

‘The United States remains firmly committed to Ukraine’s sovereignty and territorial integrity in the face of Russian aggression and, and our support for Ukraine’s Euro-Atlantic aspirations,’ Biden said.

‘We’re revitalizing the strategic partnership commission between our nations and we’re also creating a new strategic defense framework and a new $60million security assistance package, as well as a new energy and climate dialogue to help Ukraine diversify its energy supplies while supporting our climate goals relating to global warming.’

The US’s withdrawal from Afghanistan had raised concerns that the Biden administration would not focus on Ukraine, an official from the Eastern European country had told The Wall Street Journal.