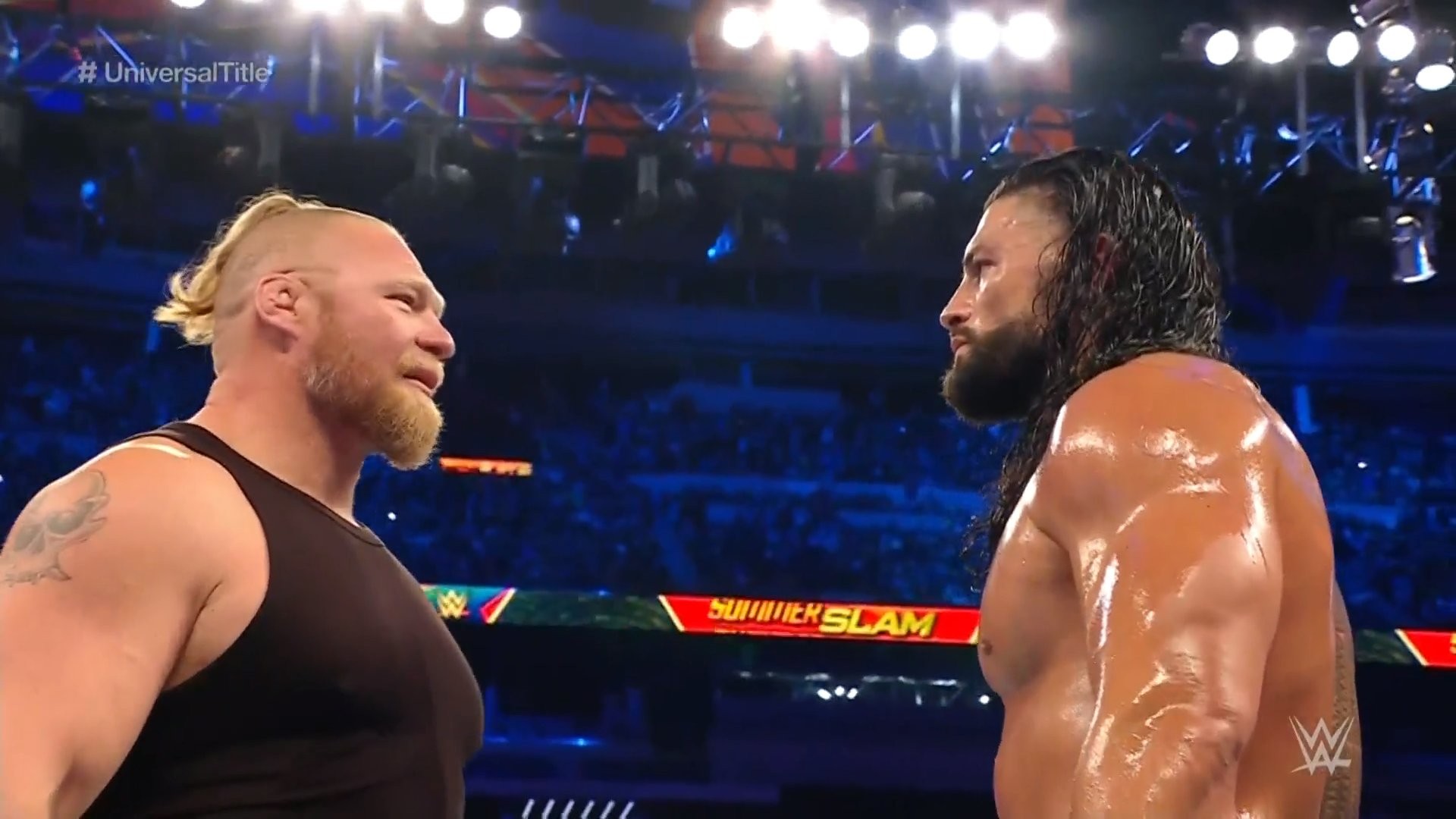 WWE SummerSlam was a night of huge moments as four titles changed hands and Brock Lesnar returned to confront Roman Reigns hours after Becky Lynch made a comeback.

The Beast Incarnate made his presence felt in Las Vegas as he looked to be in incredible shape as he stood face to face with his long-time rival after the Tribal Chief beat John Cena in an all time classic.

Lesnar hadn’t been seen on screen since losing the WWE Championship to Drew McIntyre at WrestleMania 36, but now he’s set his sights on Reigns and the Universal Title.

Of course, the added wrinkle is Brock’s former advocate Paul Heyman switched allegiances last summer and has been by the side of Reigns ever since, so fans will be intrigued to see how things unfold.

Lesnar’s return was the exclamation point on a stacked night, but what can’t be ignored is the incredible main event Reigns and Cena delivered before his music hit.

The fans were eating up every single nearfall, with the Hollywood star chasing a record breaking 17th world title while the Head of the Table had vowed to leave WWE if he lost.

In the end, after withstanding so much punishment, a spear laid Cena down for a three-count – and now Reigns will have to move on and deal with Lesnar.

WWE had to make a statement tonight, and they did that with Becky Lynch also making a comeback (more on that below), and suddenly the landscape has changed in a major way.

The opening match was a great clash for the Raw Team Titles as RK-Bro knocked off AJ Styles and Omos to capture the gold as Randy Orton and Riddle showed great chemistry as partners.

Later in the evening, the new champs joined Saved By The Bell’s Mario Lopez backstage where the Original Bro teased a surprised for Raw on Monday.

Up next, Alexa Bliss made quick work of Eva Marie in a match that sadly didn’t have enough in-ring quality or supernatural madness to work out strongly either way.

However, the post-match saved it when Doudrop mocked Eva’s loss, announcing her mentor as the loser before putting on her robe and doing an over the top impression.

The third match saw the arrival of Damian Priest as the Archer of Infamy defeated Sheamus in a very entertaining United States Title match.

The Celtic Warrior might take issue with his opponent removing his protective face mask and exposing his broken nose, but this would be a good chance to move Sheamus up the card.

We’ve seen combinations of The Usos and Los Mysterious plenty of times over the past few weeks and months, but this one really delivered as Jimmy and Jey Uso successfully defended their SmackDown Tag Team Titles in an entertaining clash with the father/son duo.

After a musical interlude with Rick Boogs – who is massively popular with the live crowd – performing Shinsuke Nakamura’s theme song to introduce the IC Champion – it was time for Bianca Belair to defend the SmackDown Women’s Title.

She was meant to face Sasha Banks as advertised but she was pulled at the last second, initially replaced by Carmella before a returning Becky Lynch came out to take her place and won the gold in a matter of seconds.

From one squash to another – separated by Gable Steveson and Tamyra Mensah-Stock being paraded out – Drew McIntyre made short work of Jinder Mahal as the pacing feels a bit off at this point.

With two hours down and four matches still to go, it already looks like the show will be running well over the three hour mark but things picked up with the Raw Women’s Title match as Charlotte Flair made Nikki A.S.H. tap out to regain the hold.

This was fantastic bell to bell with Rhea Ripley more than doing her part too, but it was the Queen who managed to get the win – the fourth championship change tonight.

Up next was a bona fide dream match with Edge making Seth Rollins tap out after after an all-time classic.

Both men were carrying high expectations but they more than delivered, with the fans already on board as the Rated R Superstar came out to the Brood music and entrance before switching to his usual theme.

Then, the two men put on a masterclass in storytelling and drama before Edge picking up a massive win.

In a break from the in-ring action, John Morrison and The Miz came down to debut their huge Drip Stick 2000, but Xavier Woods had nabbed it and drenched them both in a silly but entertaining skit.

The WWE Title match between Bobby Lashley and Goldberg was a hard hitting but plodding affair that went longer than some might have expected, with the All Mighty eventually winning after the challenger was left unable to stand.

The fans cheered his every move – including MVP getting involved to help him cheat – even if the ending fell a bit flat, but there was more to come.

Goldberg’s son Gage hopped the barrier and tried to attack Lashley from behind only to get dropped with a Hurt Lock, which led to the Hall of Famer promising revenge and insisting he will ‘kill’ the WWE Champion.