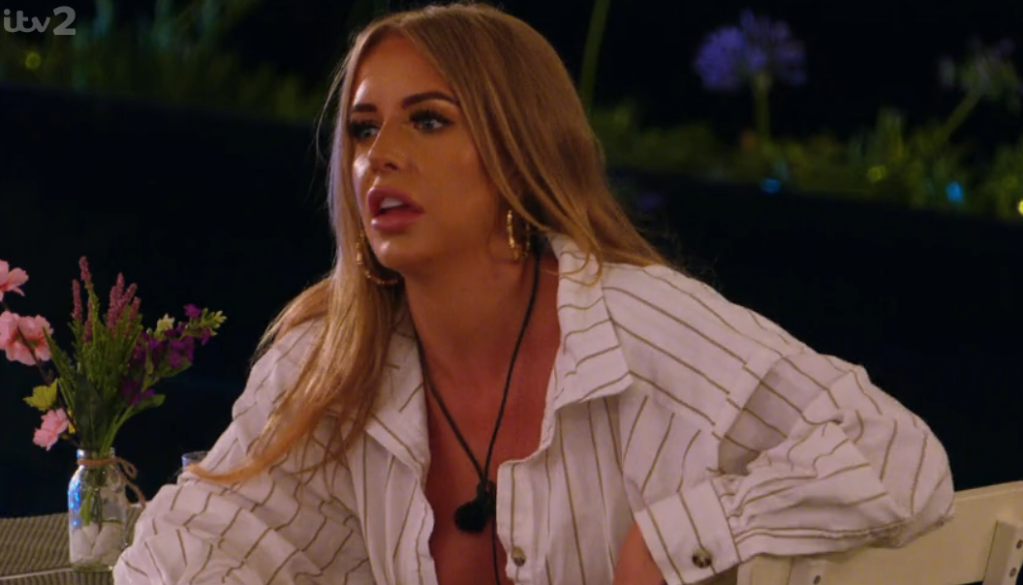 Love Island’s Faye Winter surprised everyone, including herself, by admitting that she ‘loves Teddy Soares.

The couple have patched things up following an explosive row in which Faye screamed at her partner (and every male islander that tried to speak to her) when she saw a video clip of Teddy confessing he found another islander attractive.

As Ofcom complaints from viewers about the uncomfortable scenes flooded in, she apologised to him last week, admitting she ‘went about it completely the wrong way’.

Now it seems she cares more about Teddy than she’s letting on as a romantic dinner for everyone in the villa prompted the confession.

As the boys got busy in the kitchen preparing a three course dinner for the girls, the ladies had a chat about the loved up evening.

Faye replied ‘I just love him’ before looking shocked, while Priya gave a gasp of surprise.

Trying to play it cool she shrugged and said: ‘I don’t know what you’re talking about. What? Carry on.’

Faye’s wasn’t the only declaration of love that got people talking. Jake said the L-word to Liberty, only it went down like a lead balloon with the rest of the girls, who felt he wasn’t being genuine.

The pair are one of four couples at risk of being dumped after the islanders voted for the least compatible couple.

Jake and Liberty got three votes along with Faye and Teddy and Mary and Aaron, while Priya and Brett received five.


MORE : Cardi B fiercely defends Lizzo as singer breaks down over ‘fat phobic’ and ‘racist’ comments