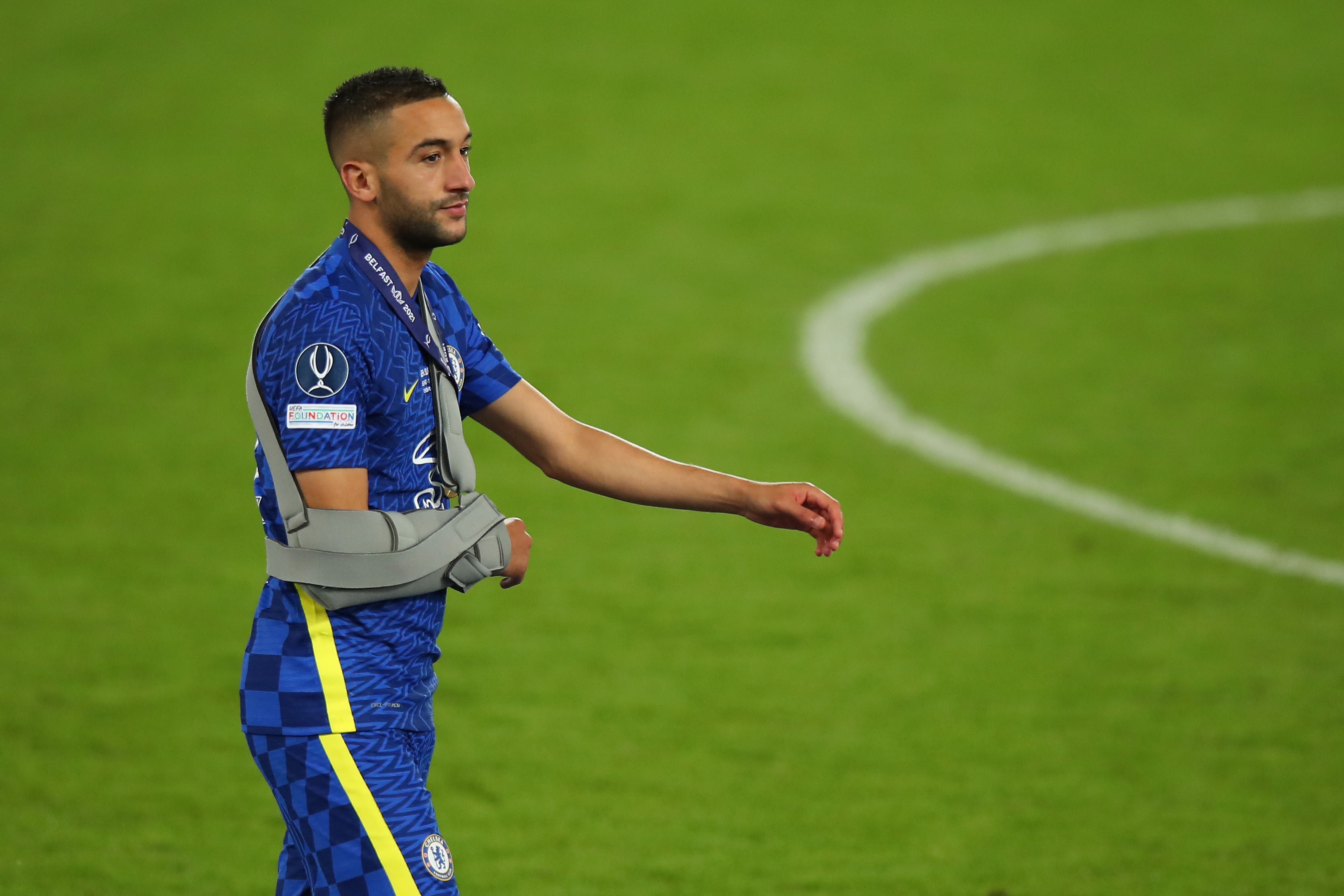 Hakim Ziyech looks set for a lengthy spell on the sidelines after Thomas Tuchel indicated that the midfielder had sustained a ‘serious’ shoulder injury in Chelsea’s Uefa Super Cup win over Villarreal.

The 28-year-old had shone across Chelsea’s pre-season schedule and opened the scoring with a smart close-range finish in the 27th minute in Belfast on Wednesday evening.

But Ziyech was forced off after a seemingly innocuous collision with Juan Foyth at the end of the first half and Christian Pulisic came on to replace the Moroccan before Chelsea eventually prevailed on penalties.

The former Ajax star was administered oxygen as he lay on the pitch and was later pictured wearing a sling as he watched the remainder of the game from the substitutes bench at Windsor Park.

It’s just the latest in a long line of frustrating setbacks for Ziyech, who missed a large part of last season – his first at Stamford Bridge – with separate knee and hip injuries.

‘If you take a player out during the first half, it’s serious,’ Tuchel told BT Sport when asked to reveal the severity of Ziyech’s injury.

‘It’s unfortunate because he was a very decisive player for us in the last few games.’

Tuchel admitted several Chelsea players had been ‘overused’, with just days separating the Super Cup and the club’s Premier League opener at home to Crystal Palace.

‘Physically, it [120 minutes and penalty shootout] was the worst thing that could have happened to us. Mentally and psychologically, this was the best thing to start with a trophy because there was no way to delay the game or play it in four weeks,’ Tuchel said.

‘This was the moment where we needed to start and that’s why we chose this line-up. We didn’t want to break our heads and share minutes. We had all these discussions, do we continue the preparation phase and use this match to get ready for Saturday?

‘Are we 100 per cent of our capacity? No, absolutely not. But we are ready to play football matches on a certain level.

David De Gea fires warning to Dean Henderson over battle to be Man Utd’s no.1

‘We had to suffer because you could see that after 35 minutes, things got a bit hard for us. We had some easy ball losses, it was harder to close spaces and unfortunately it continued like this in the second half.

‘They deserved their equaliser as we had easy ball losses, we finished our attacks too early and we allowed chances. I was very impressed by our reaction after 75 minutes, we had total control of the game again and played a very good match until the 120th minute.

‘So there are a lot of good things. Physically, we overused some players who were absolutely not ready to play 120 minutes and we have only two days in between the next match with Crystal Palace but this is the schedule.’