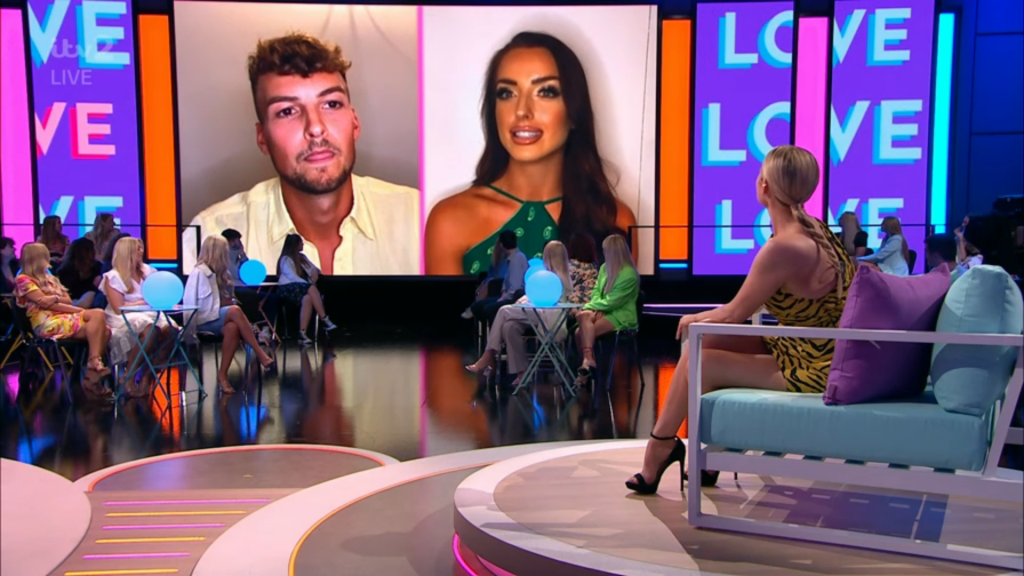 Hugo Hammond and Amy Day’s reunion on Aftersun was just as awkward as expected, with both throwing shade at each other after their time together on Love Island.

As the pair headed on a pre-recorded reunion date, Amy was ready to confront Hugo with a lot of the same accusations she’d already thrown at him, as she called him ‘fake’ and explained how she felt she’d wasted her time on the show with him.

Hugo disagreed with her comments, particularly her assertion that he just saw Casa Amor as ‘a lads’ holiday’, but the majority of airtime saw Amy saying her piece.

When the two ex-lovebirds were reunited on Aftersun live, shortly after their date clip was broadcast, it was more of an even match as Hugo decided to change tactics at the end and lob a vicious dig at Amy about using him ‘as a green card to the villa’ out of nowhere.

Things might have started breezily enough for Hugo, as he reflected on his full stay in the villa and amusingly referred to it as ‘a lads’ holiday, just like he’d insisted it wasn’t to Amy, but she was ready with some brutally honest answers.

Describing herself as feeling ‘cracking, now I’m away from Hugo’, Amy went on to brand Hugo as ‘just terrible with women.’

‘I don’t think he knows what to say,’ she continued.

She also called him out on his favourite line of wanting to be ‘true to himself’, asking: ‘Can you not be true to everyone else at the same time?’

Hugo initially tried to keep things calm in front of the studio audience, as he said: ‘It makes me really sad that it’s got to this point and you feel this way. I don’t agree, but if that’s what you feel…’

Amy doubled down on her annoyance with Hugo, as she loudly confirmed that she regretted pulling all of her eggs in Hugo’s basket.

After a cringey transition into watching their best bits following that bombshell, the pair then fielded more questions from the audience as well as host Laura Whitmore.

However, the drama truly reached its peak as Laura asked if there might be any friendship to salvage between the two of them.

With Amy’s expressive face saying it all during the subsequent very awkward silence, Hugo then took that moment to suddenly accuse Amy of using him.

Hitting out at her sleeping in Tyler’s bed, Hugo declared: ‘I just felt like a green card to the villa.

‘Amy’s clearly got a strong opinion but I think people are forgetting that Amy chose to stay in Tyler’s bed on night one, so she wasn’t into me from the start and I just felt like a green card to the villa.’

‘That is the first time you’ve said that – how funny,’ hit back Amy as Hugo suggested he’d said it previously during their date, but it was left on the cutting room floor.

Safe to say, we assume they’ll only be crossing paths again in the future at events they’re both contractually obliged to attend.

Love Island continues on Monday at 9pm on ITV2.


MORE : Love Island 2021: Faye Winter in tears as she tells Jake Cornish: ‘You hurt me more than anyone in this villa’


MORE : Love Island 2021: Shock as Kaz Kamwi lands in bottom six with Jake Cornish and other islanders ahead of savage dumping