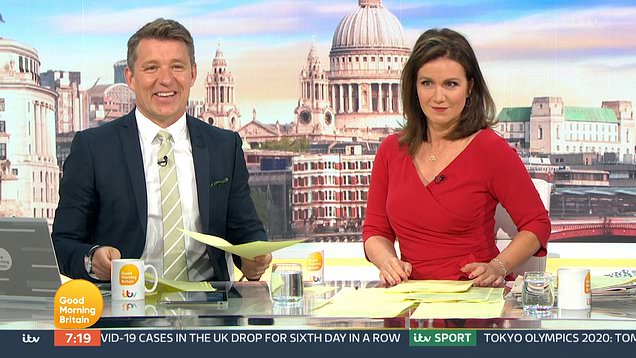 Susanna Reid is taking a well-deserved break from Good Morning Britain, and she’ll be off our screens for a little while.

The presenter is currently enjoying a summer holiday, after confirming that Tuesday (July 27) was her last day.

Speaking to co-host Ben Shephard at the time, the 50-year-old said: ‘Today’s my last day.’

Susanna will be off the show until September, with an ITV spokesperson saying: ‘[July 27] was Susanna’s last day presenting Good Morning Britain ahead of her summer break, she will be back in September.

‘The family of GMB presenters will continue over the forthcoming weeks.’

The presenter has been a mainstay on GMB since 2014. She teamed up with Piers Morgan for years before he left the show in dramatic fashion.

Susanna isn’t the only GMB presenter who has taken a break from the programme recently.

Her co-host Ben was recently forced to take unexpected leave after suffering an agonising leg injury.

The presenter, 46, underwent an operation after rupturing the anterior cruciate ligament or ACL – a ligament that helps stabilise the knee joint – in his right leg while playing football. He also tore his meniscus, the piece of cartilage that provides a cushion between your thighbone and shinbone.

Ben managed to return to the programme after a few weeks away,  rejoining the show with his leg propped up.

He explained the injury to viewers and added: ‘Thanks for all your lovely messages, it’s lovely to think you all care.

‘Could you send some of that love to my wife because she’s really struggling!’

Susanna marked her last show before her break by ripping into a government minister regarding the police cuts over the past decade. Since 2010, the number of police officers has been cut by about 20,000, it has been reported.

Good Morning Britain airs on weekdays at 6am on ITV.