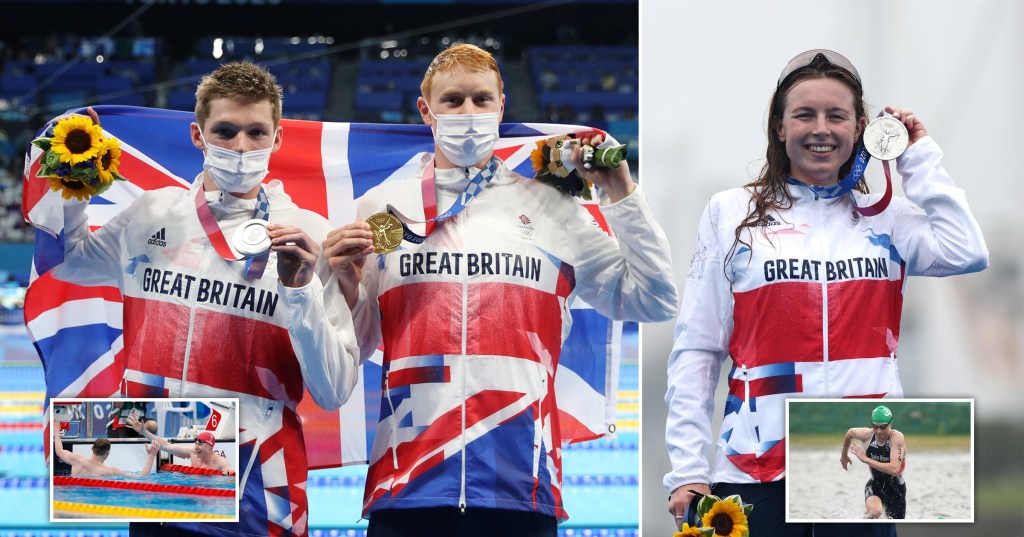 There were more dramatic scenes on day four of the Tokyo 2020 Olympics as a tropical storm hit Japan, though that did not stop Team GB from adding to their medal haul in two very eventful races. Here’s everything you missed overnight…

For the first time since 1908, two male British swimmers finished on the Olympic podium together as Tom Dean and Duncan Scott claimed gold and silver respectively in the 200m freestyle.

World number one Scott was the favourite to win the race, having laid down the fastest time in the semi-finals, but Dean touched the wall 0.04 seconds ahead of his teammate to stun the field and set a new British record.

There were no hard feelings between the pair afterwards though, with Dean and Scott hugging in the pool. The silver medallist said of his teammate: ‘Just a massive credit to Tom Dean, that was unbelievable. Olympic champion – he’s come along so far in the last 18 months, it’s a pleasure to watch.

‘The journey I’ve been on with him since I was about eight years old has been phenomenal. I’m just buzzing for Deano to be honest.’

Dean himself said: ‘I knew it was going to be a dog fight. I didn’t know how people were going to swim it. It was just race to race. Thanks so much to everyone back home, my mum, my family, my girlfriend, all the boys back in Maidenhead, thank you for staying up.’

Taylor-Brown fights back from puncture to win silver

Great Britain’s Georgia Taylor-Brown won a remarkable silver medal in the women’s triathlon despite falling 22 seconds behind the leaders when she punctured her bike going into the final leg.

The 27-year-old lost touch with the lead pack less than a kilometre from the end of the 40km bike ride, suffering a flat tire, but powered on before overtaking three rivals – including teammate Jessica Learmonth – in the run.

Taylor-Brown finished one minute and 15 seconds behind Flora Duffy, who secured a remarkable and historic first ever gold medal for Bermuda having rejected the chance to represent Britain as a teenager.

Great Britain will take on the United States for a place in the men’s sevens semi-finals after they suffered a heavy 33-7 defeat to Olympic champions Fiji in the wet and windy conditions in Japan. GB’s men’s hockey team also suffered a disheartening 5-1 defeat to Germany.

Unfortunately the weather played havoc elsewhere, with Andy Murray and Joe Salisbury’s doubles match against Kevin Krawietz and Tim Puetz initially delayed, while the players only managed to play three games – with the Brits leading 2-1 – before rain stopped play again.

What else is happening on day four of the Olympics?

There’s still plenty more action to come on Tuesday, with both the women’s cross-country mountain biking and synchronised 10 metre platform final – both of which were won by Brits in the male equivalents yesterday.

Medals are up for grabs in, among others, equestrian dressage, gymnastics, canoe slalom and surfing, with the latter moved forward in one of several changes to the schedule due to the tropical storm Nepartak as it heads towards the northeast coast of Japan.

Team GB also take on Canada in the football later in the day, while Bianca Walkden will be aiming to claim gold in the +67kg taekwondo competition having been in tears just a few days ago when teammate and close friend Jade Jones suffered a shock defeat.


MORE : Typhoon with winds of up to 129mph to hit Olympics tomorrow