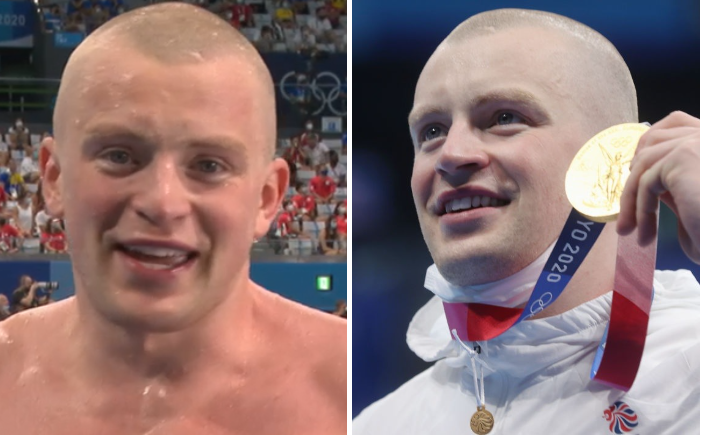 Adam Peaty apologised after his emotions understandably got the better of him during his post-race interview which came moments after he claimed Team GB’s first gold medal of the Tokyo Olympics.

The 26-year-old dominated from start to finish in the final of the men’s 100m breaststroke, romping home in a time of 7.37secs, with Arno Kamminga a distant 0.63s behind in second.

In the process, Peaty became the first Brit in Olympic history to successfully defend a title following his heroics at the Rio Games five years ago, while he also maintained his astonishing unbeaten seven-year record at major championships.

‘I haven’t felt this good since 2016, it just means the world to me,’ Peaty told the BBC just minutes after confirming his status as a British sporting legend.

‘I didn’t have the best preparation of my life. But you throw that out the window. That’s really what it takes to be an athlete. It’s not who’s the best all year round, it’s who’s the best on the day.

Former British Olympian, Sharron Davies, quickly apologised on Peaty’s behalf, before asking the swimming sensation whether he felt nervous, given the level of expectation.

‘Of course, yeah I did feel a little pressure in terms of it being a final,’ said Peaty, in response. ‘But that’s good pressure, I needed to put myself on edge and I needed to go my fastest one. You can do whatever you want in your own pool, in your home nation, in your own race.

Olympic athletes told to stop hugging each other on podium

‘But when it comes down to here, you’re not racing for a time, I’m racing myself and all these great athletes here. I know these boys come back because they want it more and for me I do feel like I’m on the back heel, but that’s where the training comes in.

‘This closes a chapter for me, it’s all finished business and I want to say thank you to the nation for being behind me the last five years, thank you to my gorgeous partner, my gorgeous son and my family back home, they’ve been with me every step of the way.