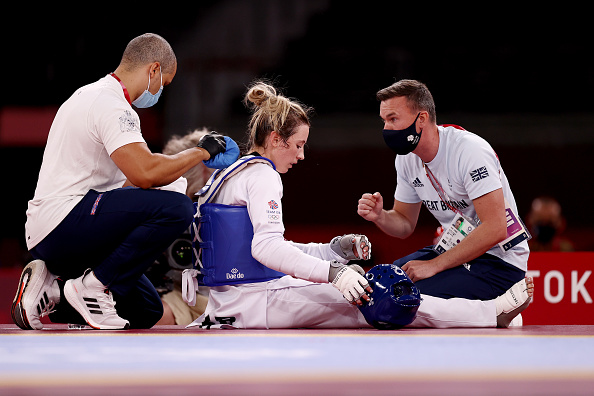 Double Olympic champion Jade Jones has suffered a shock first round defeat at the Tokyo Olympics.

Jones, 28, was chasing a third Olympic gold medal which would have seen her become the first British women to win three at three consecutive Olympic Games.

But those hopes were ended by Kimia Alizadeh, representing the Refugee Olympic Team, who beat the Brit 16-12.

Jones can still clinch a bronze medal via the repechage if Alizadeh reaches the final.

But she will have to wait until Paris 2024 for her next chance to make history.

Jones, the heavy favourite heading into the contest, took the first round 6-4 but Alizadeh hit back n the next two 6-2 6-4 to take the win.

Why is Naomi Osaka representing Japan at the Olympics?

The final round of the bout was tied with just 30 seconds left on the clock.

In the tense conclusion, Alizadeh scored a pair of two-point body kicks to take the lead, hanging onto clinch a four-point victory.

Alizadeh will face Lijun Zhou of China later on Sunday morning for a place in the semi-final.


MORE : ‘It doesn’t feel like an Olympics!’ Adam Peaty speaks out after first taste of Tokyo Games