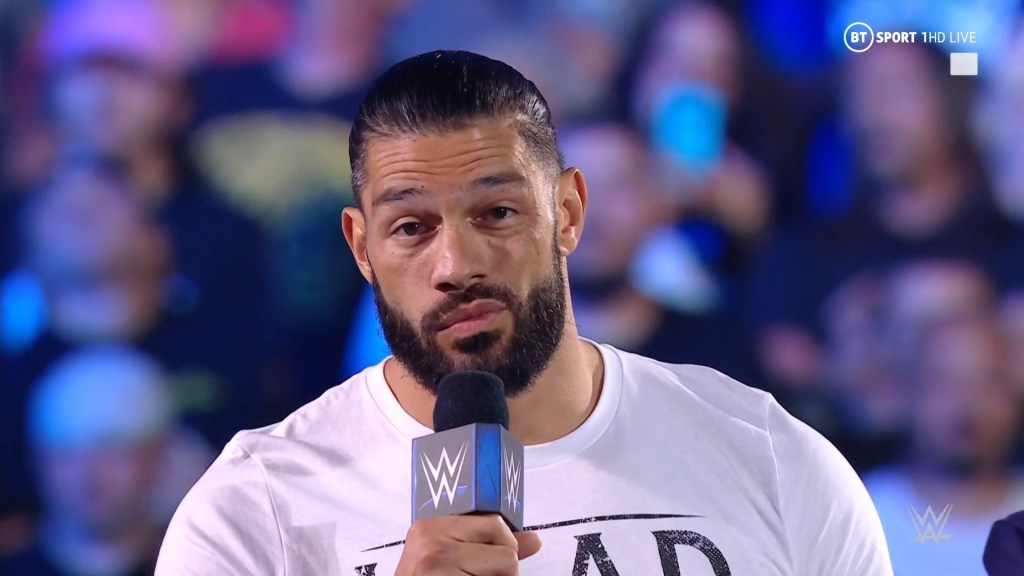 Roman Reigns tore John Cena to shreds on SmackDown as he roasted the WWE legend and compared his character to ‘missionary position’.

The Universal Champion wasn’t taking any prisoners during Friday night’s edition of the blue brand as he took aim at the wrestler turned Hollywood star for not shaking up his on-screen persona for his comeback.

Cena returned at Money In The Bank and set his sights on the Tribal Chief’s title, but Reigns has apparently been less than impressed with the way things have gone since that night.

Trashing the former champ for not shaking up his music, presentation or general act – all things Roman did when he returned this time last year – branded him a nostalgia act.

He even insisted his promos were like ‘missionary position every single night’, rather than trying something different for his big comeback.

‘I have no desire to see you,’ the champ insisted, emphatically denying the wrestler-turned-Hollywood star’s SummerSlam challenge to a chorus of boos from the crowd.

However, that reaction quickly turned to cheers and intrigue as he was interrupted by a certain Finn Balor, who came down with an aura closer to his NXT attitude.

The Prince – who defeated Sami Zayn in his first SmackDown match for two years earlier in the night – suggested if he was dodging Cena, maybe Roman would accept his challenge instead.

Love Island USA: Which couples from season 1 are still together?

There were big ‘Roman’s scared’ chant from the crowd, who seem fully behind a match between Reigns and Balor – and the champ accepted to a roar from those in attendance.

It should be noted that veteran commentator Michael Cole didn’t confirm the match with Balor for SummerSlam, so surely we’re still headed towards Reigns and Cena for Vegas.

However, Finn will be a great distraction on the way to that blockbuster bout, and adds a wrinkle in the storyline which no one saw coming.