***Warning: Spoilers ahead for episode 3 of the Gossip Girl reboot ***

The Gossip Girl reboot is not disappointing when it comes to the drama as the HBO Max series continues to shock and delight.

The new version of the iconic gossip blogger is clearly having a huge impact on the students at Constance St Jude, if the antics in episode three are anything to go by.

The scandalous lives of the new iteration of New York’s elite have not failed to leave us shook after Zoya Lott (Whitney Peak) took a stab at becoming the next Julien, with help from Luna La (Zion Moreno).

However, all the main drama came from Max Wolfe (Thomas Doherty), his cheating dad, and his decision to reveal some very big secrets.

Here’s all the question we need answered in episode 3…

Are Max, Audrey and Aki going to become a throuple?

Suddenly, the couple found themselves having to move forward from the fact they cheated on each other with the same friend.

They might have decided to kiss and make up at the end of the episode but will their attraction to Max stop there?

We have a feeling there’s going to be more to this story.

Why does Julien’s dad’s girlfriend look so familiar?

The series totally delivered the Gossip Girl x You crossover of our dreams after Elizabeth Lail appeared in episode three as Lola Morgan, the girlfriend of Julien’s dad.

For those of you who don’t remember, the actress starred as Beck in season one of the Netlix series alongside Penn Badgley.

The fact Penn went from Loney Boy/Gossip Girl to an even lonelier boy/murderer has been a delight for fans of the original series, so to see his other blonde obsession starring in the GG reboot is such a treat.

Were we the only ones who caught the literal nod to You when Julien (Jordan Alexander) was actually stalking Lola as she made her way into her brownstone building?!

How far will Kate go as Gossip Girl?

First, we have the teachers spying on their teenage students, posting illegal pictures of them online and now they are turning on each other?!

It’s starting to feel like Kate Keller (Tavi Gevinson) and her little gang are getting a little bit too addicted to the power they have with their new Instagram page.

Also, how on earth did one little firewall helped them evade the investigations of a tech security team?! Hmm… 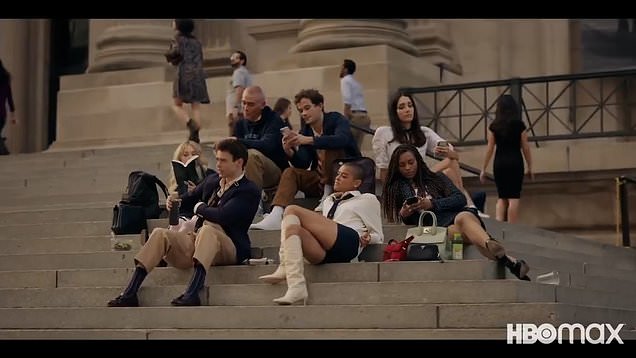 Can we get more of Max and his dad, please?

Things definitely didn’t go in a direction Max Wolfe was hoping for when he caught out his Pops’ cheating behavior.

However, we were living for the sweet moments he shared with his dad and the way he pushed for his father to be his truest self.

We need more of this, please and thank you.

Gossip Girl drops Thursdays on HBO Max in the US. It will air on BBC in the UK later this year.