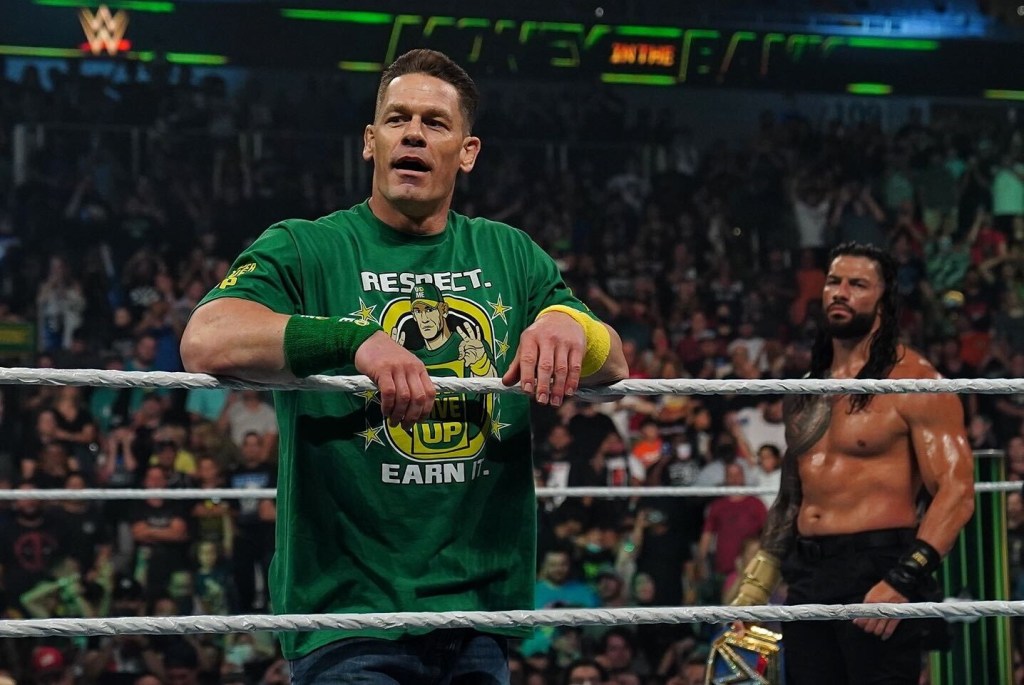 John Cena returned to WWE at the end of Money In The Bank as the company hit a home run for its first pay-per-view with a full crowd in over a year.

The Hollywood superstar hasn’t been seen in a wrestling ring since his loss to ‘The Fiend’ Bray Wyatt at WrestleMania 36, and the crowd erupted with one of the biggest cheers for all time as his music hit.

He came out to confront Roman Reigns, who has just won a phenomenal main event against Edge to retain his Universal Championship.

The audience in Fort Worth had been on fire almost the entire night but they found another level for Cena, who soaked up the adulation and taunted the Tribal Chief as the show went off the air.

The last 10 minutes of the show gave everyone a pretty good indication of where the company is heading for SummerSlam, with The Suicide Squad and F9 star back to surely challenge Reigns next month in Las Vegas.

It also seems almost certain that fans will get Seth Rollins against Edge in a first time ever match years in the making, as the Drip King cost the Rated R Superstar his title opportunity.

Edge and Reigns delivered a masterclass in storytelling, starting slow to let the crowd build themselves back up after the nonstop rollercoaster that was the men’s Money In The Bank ladder match.

They were on form, taking everyone on a very different thrill ride which saw Roman retain the gold after Rollins attacked Edge with the referee down.

The two rivals brawled into the crowd moments before Roman picked up a mic and Cena interrupted, delivering a hot end to a glorious pay-per-view.

In one of the most eventful and action packed Kickoff matches in recent memory, The Usos stole the SmackDown Tag Team Titles from The Mysterios.

The two teams put on a fantastic match which would have been perfectly at home on any PPV main card, with Jimmy Uso diving in the way to take the 619 bullet instead of Jey being a definite highlight.

The main show got underway with the women’s Money In The Bank Ladder Match with all eight women getting a chance to shine.

These matches are always a car crash in the best way, and even the ending was chaotic was Nikki A.S.H. raced to the top and unhooked the briefcase with six of her opponents brawling on the ladders and Alexa Bliss buried under more at ringside.

Backstage, Roman Reigns was at his manipulative best as he took credit for Jimmy and Jey’s tag team title win and the Bloodline put on a united front.

The Raw Tag Team Titles were on the line next as Omos and AJ Styles defeated The Viking Raiders in a fun bout that showcased the champs nicely.

The giant needs to work on his selling a bit, but that’s a minor gripe considering his relatively young age and inexperience.

WWE Champion Bobby Lashley looked more dominating that he has in months as he utterly destroyed Kofi Kingston in their title bout.

This wasn’t on the level of Brock Lesnar beating the New Day man in a matter of seconds, although that’s only because the All Mighty toyed with his foe before putting him away with the Hurt Lock.

Rhea Ripley and Charlotte Flair had the unenviable task of battling ‘we want Becky’ chants, but the latter raised her middle finger high.

It was symbolic of their in-ring response too, as the superstars turned things round and ended up hearing ‘this is awesome’ chants as they delivered a fantastic clash.

In the end, Flair picked up the win and the Raw Women’s Title when the Nightmare tapped out.

With the greatest respect to everything that came before it, the men’s Money In The Bank absolutely stole the show and should go down as one of the best in the match’s long history.

Everyone had a chance to shine (Ricochet in particular deserves a special mention) and there became a point where anyone could have believably won.

The One And Only stunned everyone in attendance with a tight rope walk, leaping onto the ladder, and then turning Riddle’s attempt to push him off into an incredible dive to the outside.

Jinder Mahal, Shanky and Veer took out Drew McIntyre, while Kevin Owens got hit with the most devastating looking bump as Seth Rollins powerbombed him through a ladder at ringside.

It seemed Rollins was poised for a win, but Big E hit the Big Ending off the ladder and climbed back up to secure the briefcase as the fans went wild.

The SmackDown Saviour ranted about his loss backstage, blaming Edge for him missing out on a Universal Championship opportunity on MITB itself.

WWE Money In The Bank results and grades