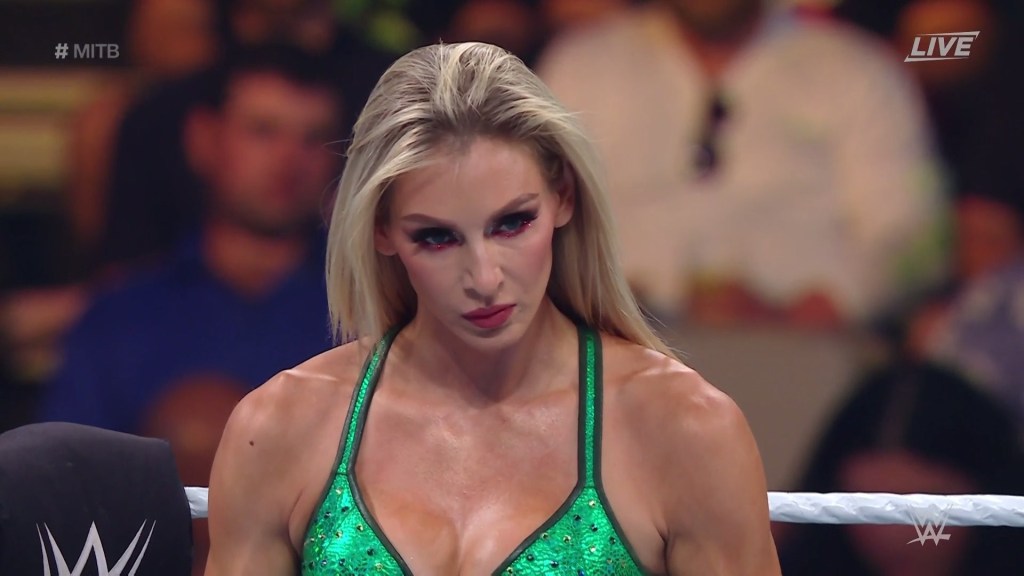 Charlotte Flair delivered a shocking response to WWE fans chanting for Becky Lynch during her match at Money In The Bank.

The Queen is battling Rhea Ripley for the Raw Women’s Championship at the show, but fans were clearly clamouring for The Man to make a comeback judging by their response.

With the live crowd in Fort Worth, Texas chanting ‘we want Becky’, Charlotte was quick to fire back as she raised her middle finger to the naysayers in the stands.

The feed actually cut out in an apparent attempt to censor her reaction, but it was clearly visible as the image returned.

Despite the pair putting on a strong bout, the chants returned partway through, although the audience did rally behind the Nightmare as the match rolled on and the action picked up to a thrilling level.

In the end, Flair won the match after brutally attacking her opponent’s knee before making her tap to the Figure 8.

This was the last chance for Becky to show up after she didn’t appear during the women’s Money In The Bank ladder match earlier in the night, and fans could be forgiven for hoping for a return.

The Man hasn’t been seen on screen since June 2020 when she gave up the Raw Women’s Title and revealed she was pregnant, and now she could be poised for a comeback almost eight months after giving birth to baby Roux.

She’s been teasing a return for a long time, but Sunday night’s hint was the most blatant as she shared a photo of herself outside Dickies Arena in Forth Worth, Texas – the location of tonight’s show.

Lynch looks to be in fantastic shape, and she suggested fans should be expecting the unexpected when it comes to the women’s Money In The Bank ladder match.

She wrote: ‘Beautiful day in Fort Worth Texas. I really hope no one gets taken out of this ladder match. #MITB’

Fans weren’t really sure what to think, particularly as Becky previously teased an appearance at WrestleMania, which didn’t end up happening.

There was some speculation she could have returned during the Money In The Bank match itself, although that didn’t pan out as Nikki A.S.H. caused a huge upset in a great moment.