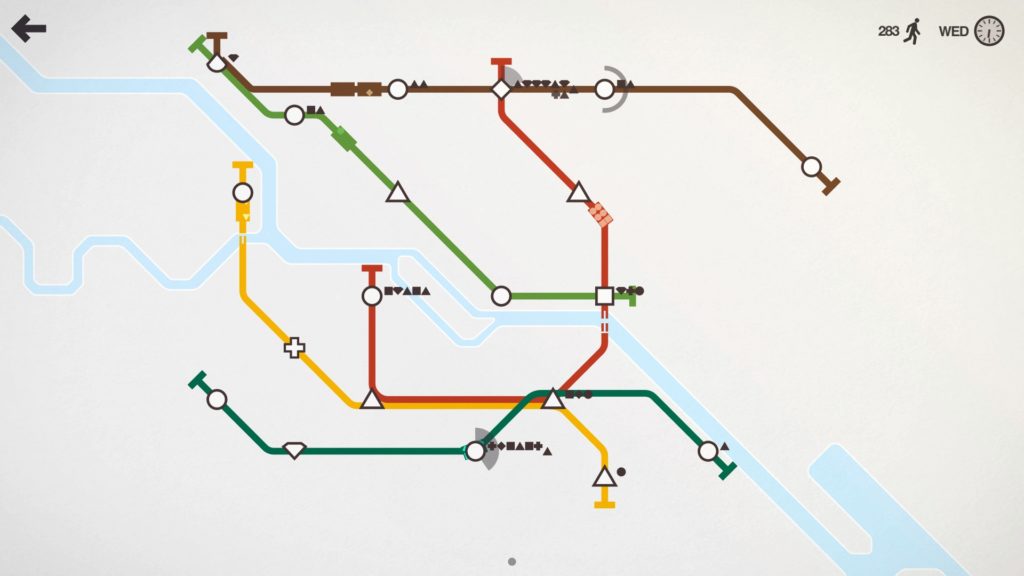 A reader tries to explain why he loves puzzle game Mini Metro so much, despite it sounding extremely dull as soon as you describe it.

I made a blunder with my family at a recent gathering. Well, more of a failure of communication. I tried to convince my non-gamer brother to try playing Mini Metro. To be absolutely fair none of this was Mini Metro’s fault, it was my abject failure to sell the idea of the game to him. I want to try again here on GameCentral to see if I can do any better.

I probably failed with the initial description by saying that it was a game about organising a mass transit system. Be still my beating heart, a game that sounds like a job, and a paralytically boring job at that. Reflecting on this, what I should have tried to convey is the deep sense of satisfaction that organising that mass transit system elicits from me which, as you can imagine, is really hard to explain.

Mini Metro originated as a mobile game ported to the Switch and concerns putting together and managing a transit system (think underground or train). There are several modes but the main one involves building and maintaining the network for as long as possible before the system collapses under the weight of disgruntled passengers tutting and looking angrily at their watches.

The game unfolds as a subway map that you build on the fly by drawing train tracks between randomly spawning stations to create the classic underground map, with colourful lines weaving around the map like an abstract painting. The stations pop into existence as shapes like squares, triangles, circles and so on. Passengers from one shape always seek to go to a different shape and the distribution of the shapes on the map, and concentrations in areas of the map of the same shape stations, create organic puzzles about how to manage flow around the system effectively.

Extra challenges are added through the management of resources like limited uses of bridges and tunnels to navigate rivers, limited numbers of lines that can be utilised at any one time, and a finite number of trains to deploy to service your rapidly growing network. The game works on a weekly schedule and at the end of the week you are given an additional engine and a randomised improvement, like an additional line, a carriage to increase capacity, interchanges which turn a single station into a passenger hub or extra tunnels or bridges to deal with particularly waterlogged cities.

Like all great puzzle games the challenge is layered up well, so you don’t feel immediately overwhelmed and as you progress you step back and look at the complex system you’ve created with a sense of pride at how the game took you to that point. I’d also like to take a moment to laud the aesthetics of the game. The simple goal to create a game with the London tube map aesthetic is so smart and obvious it’s hard to believe it’s not been tried before. It’s this simple, readable interface that makes the game so playable. It doesn’t need a cluttered hub, all the elements you need are always present on-screen and this is probably a tribute to its mobile beginnings.

As you progress and build the system it contorts and expands and, more importantly, you react to its convulsions to keep the system in balance. Therein lies the driving impetus of the game: it’s a game of spinning plates. You can have the system in complete balance and then the fates will throw in a concentration of stations for you to syphon the pressure off the network and this builds up until you eventually can’t keep it going.

If there was one slight criticism it would be that Mini Metro could do a better job of explaining controls and systems before flinging you into the action, especially the maintenance of the system when you are in the middle of a game. But the game is simple enough that after an initial hump you should have a good grasp of the basics.

Mini Metro is a great game with an obvious and pleasing idea at its core, which is also fundamentally off-putting to explain to people as to why it is a good game. But trust me on this, it’s one of those games which will suck you in and take you on a journey and the destination is… funsville.


MORE : Zelda: Skyward Sword is terrible and we should all just admit it – Reader’s Feature


MORE : The main gimmick for the Nintendo Switch 2 should be… ray-tracing – Reader’s Feature