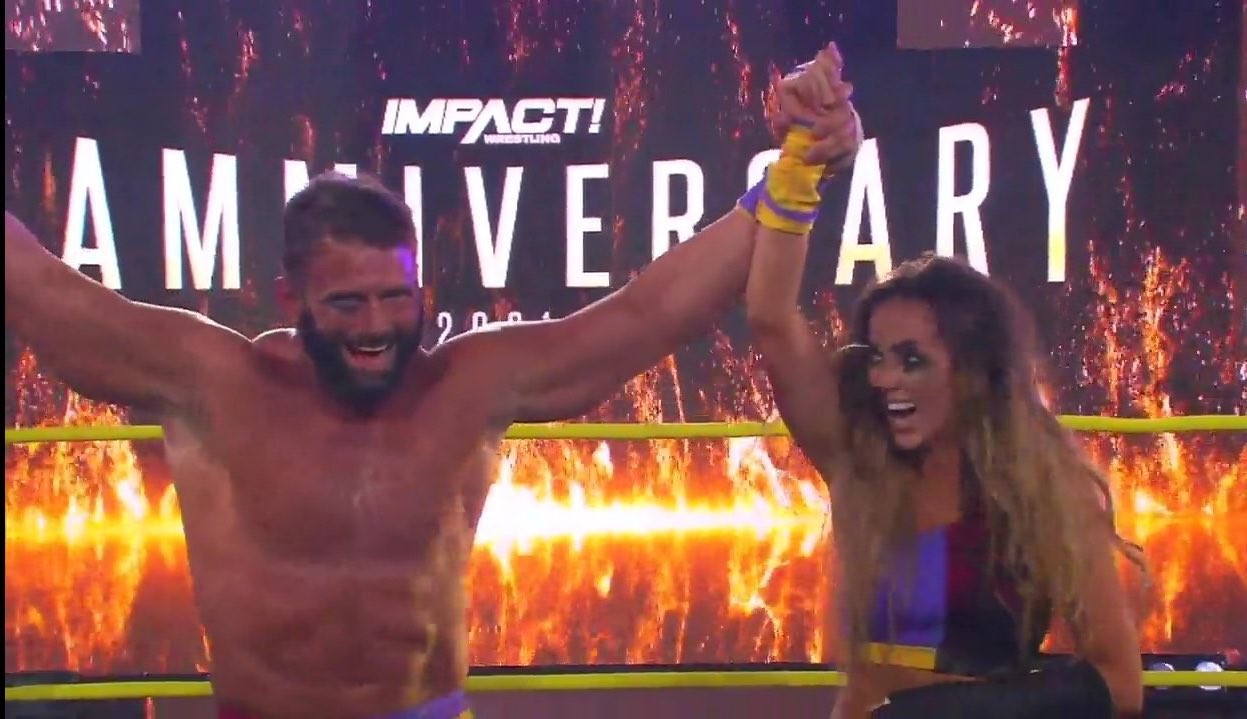 Still, the Hot Mess – who was released by WWE back in April – looked to be in great shape as she joined her man in his bout against Tenille Dashwood and Brian Myers.

It was a sweet moment for the couple, who were visibly moved as the Nashville crowd greeting her return with ‘welcome back’ chants en route to their victory, which came after Green hit the Unprettier.

Although she always seemed to be the perfect tag team partner for her man – the first mystery star of the evening – the injury cast some doubt over the situation.

Thankfully, IMPACT were still able to pull off a great moment for everyone, and Green should be a great addition to the Knockouts roster.

Her return came just days after she debuted at Ring of Honor: Best In The World last weekend, which in turn was shortly before her 90-day non-complete clause was due to expire.

She came out during the show as Maria Bennett-Kanellis confirmed her as the final entrant for the upcoming Women’s Championship Tournament.

Stepping out onto the stage, Green teased: ‘This is what freedom looks like!’

Although the former Knockouts Champion explained she isn’t yet cleared from broken arm – which she has been recovering from at WWE’s Performance Center – she confirmed she will be fit to face Mandy Leon in the first round.

Other stars in the tournament includes the likes of Angelina Love, who has a bye to the second round, plus Allysin Kay and Holidead.

Chelsea previously admitted she was taking inspiration from AEW star Cody Rhodes’ approach after he left WWE and spent some time touring the world ticking off dream matches in plenty of different promotions.

‘My ideal, my vision would be to pull a Cody Rhodes and do a little bit of everything,’ she exclusively told Metro.co.uk, noting that IMPACT, AEW and ROH were all top of her wish list.

‘I would love that! I think that was genius of him, to get himself out there and to wrestle people he would never have been able to wrestle. That’s what I really wanna do.’

She’s also been open about her goals outside of wrestling, and the host of the Green With Envy podcast told us about her Playboy and horror movie dreams.

She said: ‘I have a bucket list of things I wanna do… Definitely I wanna be killed in a horror movie. I’ve always wanted that, I always found it so hilarious where you see the girl running and they always trip and fall, and then they get killed.

‘It’s just how it works! So I wanna be that girl. Right now, I’m trying to work at making contacts in Playboy to hopefully do that.’

There’s since been some contact with Playboy, and it seems ROH is her next step as she looks to get back into the ring.