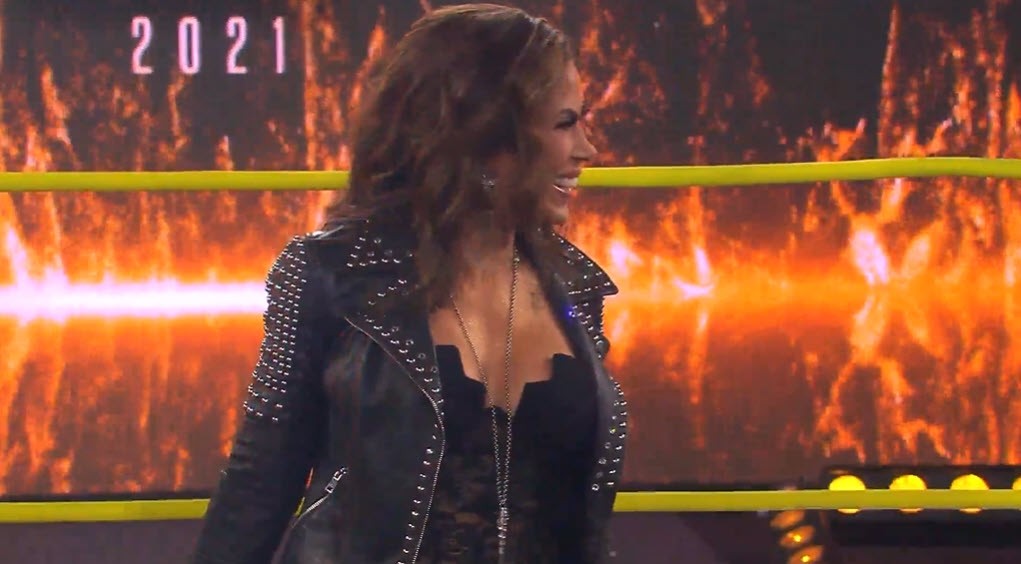 Mickie James made a shocking return to IMPACT Wrestling at Slammiversary and made a statement at Deonna Purrazzo’s expense..

The former three-time Knockouts Champion interrupted the current titleholder after she defeated mystery opponent Thunder Rosa in a fantastic match.

The Virtuosa was soaking in the moment when Mickie’s music hit and the show got a dose of some hardcore country as the live crowd gave her the hero’s welcome she deserved.

The champ wasn’t convinced, tearing down Mickie and even referring to the embarrassing ‘trash gate’ situation after her WWE release back in April.

This led to the veteran laying her out with a kick, and a potential match between the two would be stellar to say the least.

Both Rosa and James were fantastic surprises for the show, and one would hope there’s more to come from both on IMPACT.

The Knockouts division as a whole got a welcome boost on Saturday night, with Chelsea Green returning earlier in the night alongside her fiancé Cardona, despite recently confirming she’s nursing a broken arm.

Still, the Hot Mess – who was released by WWE back in April – looked to be in great shape as she joined her man in his bout against Tenille Dashwood and Brian Myers.

It was a sweet moment for the couple, who were visibly moved as the Nashville crowd greeting her return with ‘welcome back’ chants en route to their victory, which came after Green hit the Unprettier.

Although she always seemed to be the perfect tag team partner for her man – the first mystery star of the evening – the injury cast some doubt over the situation.

Thankfully, IMPACT were still able to pull off a great moment for everyone, and Green should be a great addition to the Knockouts roster.

Her return came just days after she debuted at Ring of Honor: Best In The World last weekend, which in turn was shortly before her 90-day non-complete clause was due to expire.

She came out during the show as Maria Bennett-Kanellis confirmed her as the final entrant for the upcoming Women’s Championship Tournament.

Stepping out onto the stage, Green teased: ‘This is what freedom looks like!’

Although the former Knockouts Champion explained she isn’t yet cleared from broken arm – which she has been recovering from at WWE’s Performance Center – she confirmed she will be fit to face Mandy Leon in the first round.