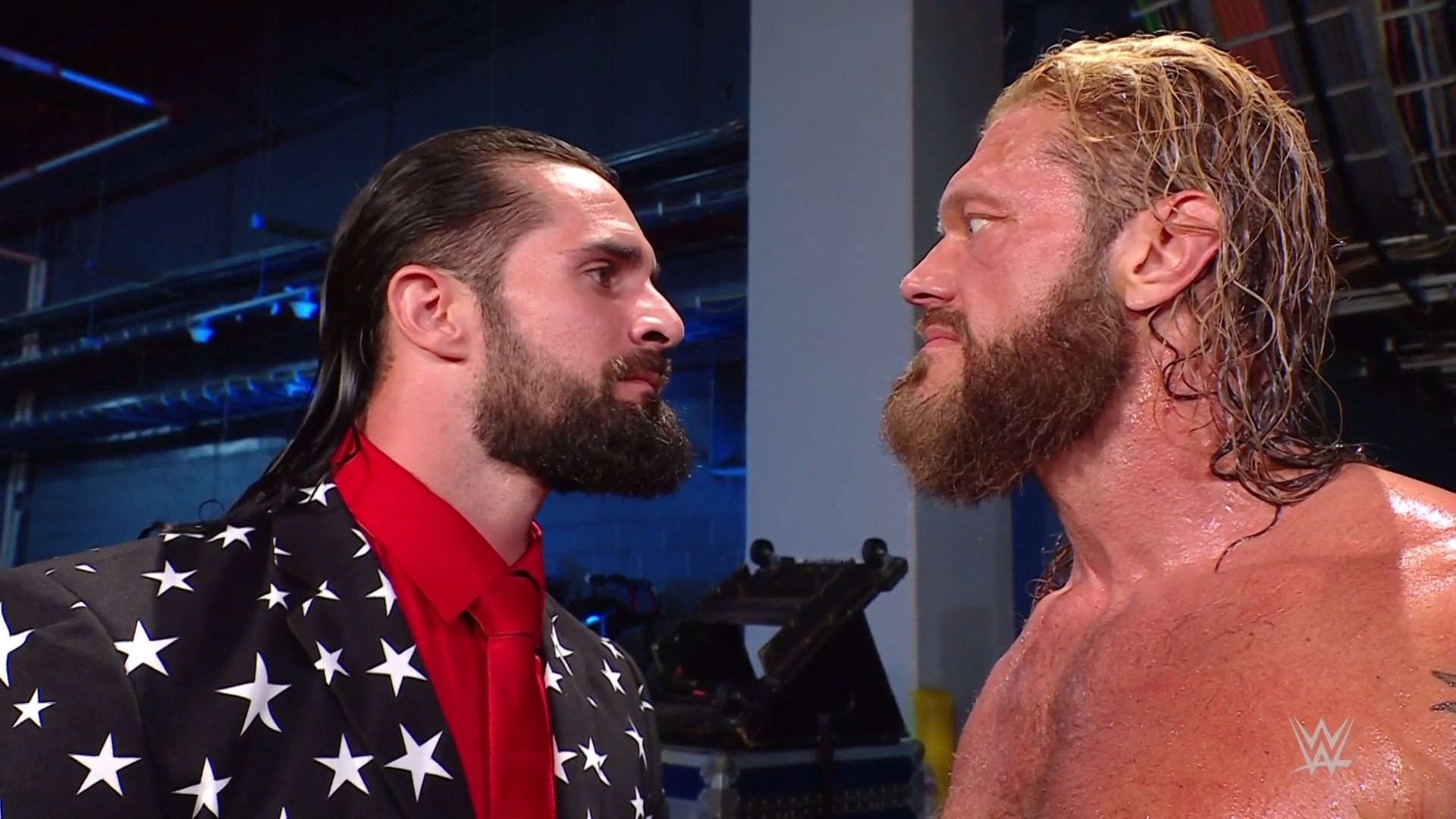 WWE welcomed back fans in a big way as Seth Rollins built momentum on a night focused on building to Money In The Bank.

There was a jubilant feel in the air as the wrestling giant’s blue brand was given an injection of energy from a hot live audience in Houston, Texas.

Kicking things off, Vince McMahon made a typically brilliant entrance with the crowd singing his entrance theme before he simply asked: ‘Where the hell have you been?’

With that, he made his exit and it was time for our stacked opening match pitting Roman Reigns and The Usos versus Edge and The Mysterios (more on that below).

It wasn’t a night of huge surprises, but things paid off partway through the night when Sami Zayn came out and cut off his own entrance music to stop fans from singing along.

Instead, he urged them to join him in his calls for justice as he claimed WWE management should just present him with the Money In The Bank contract before Sunday.

Rather than that, he was met with the returning Finn Balor who laid him out and made an emphatic statement on his first night back.

Another big moment of note was the main event, as Seth Rollins pick up a huge win heading into Money In The Bank, with Kevin Owens – who hit sad Baron

orbin with a Stunner before the bell – taking himself and Shinsuke Nakamura out with a huge elbow drop off a ladder through the announce table.

This left Big E open in the ring as the SmackDown Saviour hit a stomp onto another ladder and scored the win.

There was plenty of emotion in the opening bout, not least because it marked Dominik Mysterio’s first ever match in front of a live crowd.

Everyone played their part, with the audience loving Edge and the Mysterios’ offence and getting all over Roman and his cousins as they picked up a big win.

After the bell, the Rated R Superstar locked in a crossface using a piece of a steel chair, making the Tribal Chief tap out days before they meet at Money In The Bank.

Edge could be on a collision course with Seth Rollins after the latter interrupted him backstage and issued a great warning to his new rival.

After Balor’s return, the good times kept on rolling as Tegan Nox and Shotzi came out in the latter’s tank to face Natalya and Tamina in a rematch from last week.

Liv Morgan and Zelina Vega rowed throughout the bout on commentary, eventually scrapping at ringside, causing a distraction which let Nox secure a huge win and future Women’s Tag Team Title opportunity for her team.

After a post-match scuffle, it was Morgan standing tall to a great response from the live crowd, and WWE could do much worse than giving her a career win and the briefcase on Sunday.

The SmackDown Women’s Title match continued a run of good in ring action tonight as Bianca Belair retained over Carmella with the KOD in a very fun bout as Pat McAfee’s commentary really added to the action.

The EST of WWE deservedly got a great reaction from the fans before, during and after the match, and it’ll be interesting to see who her next challenger is.

The blue brand’s women’s division is heating up even without Bayley and Sasha Banks (for now), with Toni Storm confirmed to debut next week.

Elsewhere, Chad Gable got some decent promo time backstage and Otis attacked Cesaro before they met in the ring for what promised to be a physical clash.

What we saw was exactly that, but it didn’t last nearly long enough before Chad Gable attacked for the DQ, which earned him a European Uppercut and swing to the delight of the crowd before Otis cut off the momentum and stood tall over his new rival.

Backstage, Kayla Braxton asked Paul Heyman about Edge and got a typically confident response from the Tribal Chief’s special counsel as he vowed Reigns would ‘beat the sins’ out of his opponent at Money In The Bank.

However, Big E interrupted him before he could finish his spiel as he promised to win the contract and hyped up Edge before the main event.

Sad Baron Corbin came out looking absolutely awful with his hair and beard growing out following his recent downturn in luck.

The poor former king cut a brilliant promo about his financial hardships, even launching a CrowdFunder for fans to help out as he insisted if things get worse he’ll have to move in with his in-laws.

He was interrupted by Kevin Owens, who didn’t take too kindly to Corbin asking for help (and saying KO had money to spare by scrimping on his wardrobe), delivering the Stunner we all knew was coming.