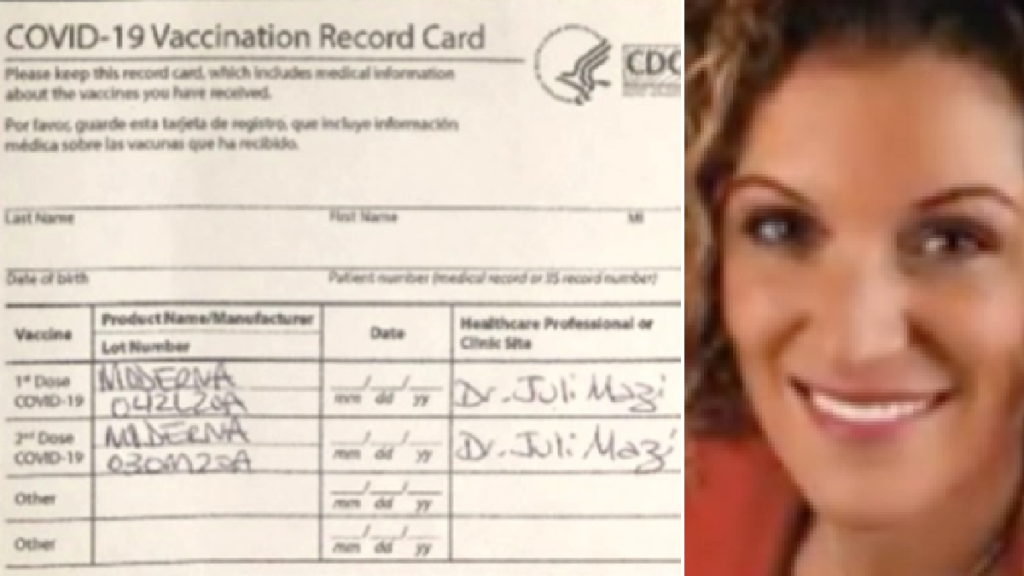 A self-proclaimed ‘naturopathic doctor’ allegedly sold customers pellets she claimed had Covid-19 giving ‘lifelong immunity’ and then told them to forge in fake vaccine cards that they had received the Moderna jab.

Juli Mazi, 41, is also accused of instructing a customer to sign her name for her as the ‘healthcare professional’ administering the Moderna shots, according to a complaint released on Wednesday.

She then instructed family members ‘to mark the cards to falsely state that they received the Moderna vaccine on the date that they ingested the purported Covid-19 homeoprophylaxis immunization pellets,’ the complaint reads.

Mazi’s instructions included statements for the customer to ‘basically fill in the card yourself’.

‘It does not matter whose handwriting it is in, and in most circumstances where they are having those like make-shift vaccination assembly line type situations, they are having people fill in the information themselves,’ the instructions stated, according to the complaint.

‘You will put my name, Dr Juli Mazi… They want to see the dates are about one month apart or at least three weeks in between those dates.’

Mazi allegedly claimed that the pellets were made from coronavirus ‘disease particles themselves’ and admitted she did not know the exact process of their production.

The so-called doctor in Napa, California, has been charged with false statements related to health care matters and wire fraud.

In a statement on Wednesday, Deputy Attorney General Lisa Monaco said that Mazi ‘endangered the public by preying on fears and spreading misinformation about FDA-authorized vaccinations’.

Mazi also peddled ‘fake treatments that put people’s lives at risk’, Monaco stated, and her false vaccine card instructions allowed her customers ‘to circumvent efforts to contain the spread of the disease’.