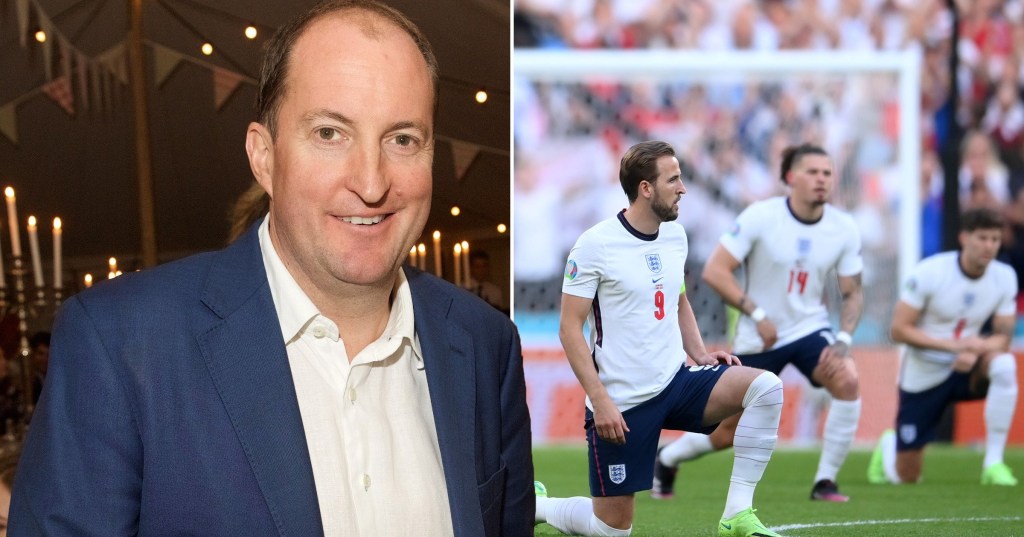 A GB News reporter who took the knee live on air in support of England players has defended his right to do so after receiving backlash on Twitter.

While England played a commendable game against Italy during the Euro 2020 final, it has been overshadowed by the racist abuse footballers Marcus Rashford, Jadon Sancho and Bukayo Saka received after missing their penalties.

The team proved exactly why taking the knee is so vital when the statement provoked such a loud reaction from opposition.

During his GB News programme today, Guto Harri said he now ‘gets’ why the England team refused to listen to the critics before taking the knee himself.

His actions resulted in a backlash on Twitter, with many viewers expressing their disappointment in his decision to do so.

Guto proved that he was going to stand by his original statement, as he shared more thoughts on the issue on the social media site.

He wrote: ‘GB News is – above all – about free speech; having the debates others won’t.

‘English footballers have made it clear that when they take the knee they are making a clear statement about rejecting racism (not endorsing the narrow divisive aims of BLM). I support them.’

Neil wrote on Twitter: ‘My @GBNEWS teammate @Guto_Harri is right to say and do as he sees fit. I do the same. That’s the ethos of the channel. Free speech. We don’t all agree with each other – that’s the point, or else where’s the debate?’

These comments come after Guto explained why he supported England’s national football team taking the knee before each game.

‘All politics is about gestures, not just about running public services,’ he said on the news programme.

‘It’s about signalling what’s right and wrong about a country.’

He continued: ‘I’ve never understood why people find it offensive. I tended to be one of those people who thought “do we really need to do this at every football match?”

‘But having seen just how close to the surface how hideously ugly racism among some English fans is, I totally get it why this squad throughout wanted to make a stand, day in, day out, every time they took to the pitch.

‘With the benefit of hindsight, I might have underestimated how close to the surface the racism is.’

Boris Johnson has slammed those behind the racist comments, saying they ‘should be ashamed of themselves’, but he has also been widely criticised for previously ‘fuelling’ racist behaviour, calling Muslim women ‘letterboxes’ and Black people ‘picaninnies with watermelon smiles’.

Home Secretary Priti Patel – who has previously insisted fans have a right to boo players who take the knee – said she was ‘disgusted by the vile abuse’.


MORE : Hundreds take the knee in solidarity with Marcus Rashford