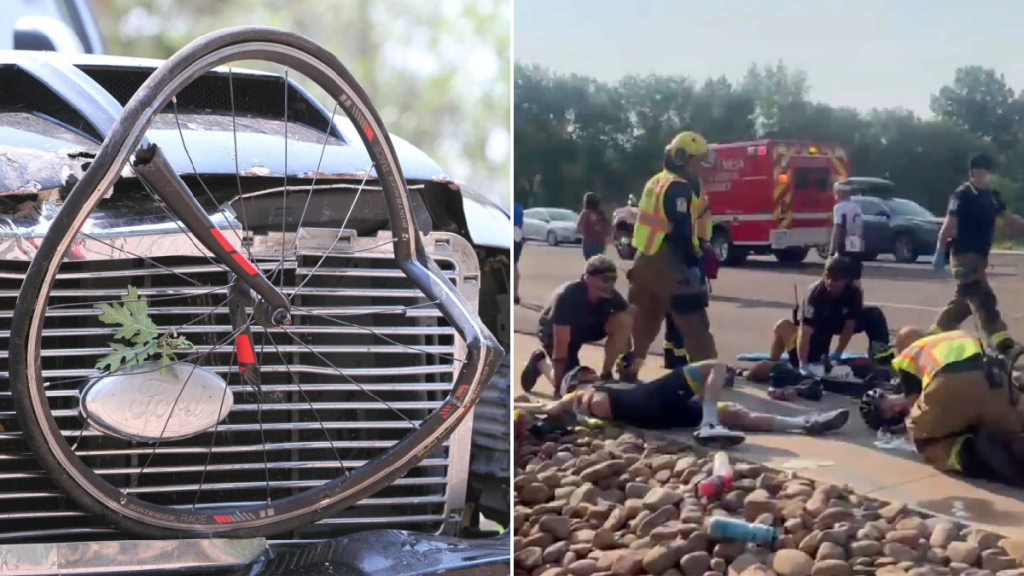 A bicyclist who was hit last month by a truck driver who plowed into a group of people in a bike race has died. Jeremy Barrett, 58, died of his injures on Saturday, according to authorities.

Barrett died three weeks after the suspect sped into a crowd participating in the annual 58-mile Bike the Buff race in Show Low, Arizona. His death was disclosed by Arizona Department of Public Safety spokesman Bart Graves on Monday.

‘He was very selfless,’ Joey Iuliano, president of the Arizona Bicycle Racing Association said of Barrett. ‘I was told that while the paramedics were working on him, he was asking how his friends were and if they were OK.’

After undergoing surgery, Barrett’s condition appeared to improve and doctors in Flagstaff planned to transport him for ongoing medical care to Tucson. However, his health turned for the worse, his friend and fellow cyclist Kathryn Bertine said.

The accused truck driver, Shawn Michael Chock, 36, allegedly hit a telephone pole and backed out of the crowd as bicyclists pounded on the pickup windows and yelled for him to get out. He then drove down the road and turned around toward the cyclists before fleeing, according to witnesses.

Chock was indicted last week and faces nine counts of aggravated assault with a deadly weapon and one count each of fleeing an accident and unlawful flight. Chock pleaded not guilt to all the charges in Navajo County Superior Court on Monday.

‘Once we have received all the law enforcement reports, we will review to determine if any new charges are appropriate to bring,’ Carlyon said.

Barrett was known in the cycling community for welcoming new members and hosting them while they trained in southern Arizona, according to his friends. He previously resided in Australia and Zimbabwe. Barrett worked for a company that produced ammonium nitrate-based products for agriculture and mining.

‘It’s so important that people know it wasn’t (only) a cyclist who died,’ Bertine said. ‘It was a human being, it was a friend, a father, a boyfriend, somebody who was a real-life living soul, an asset to our community.’

Barrett was one of six cyclists who fought for their lives after the incident.