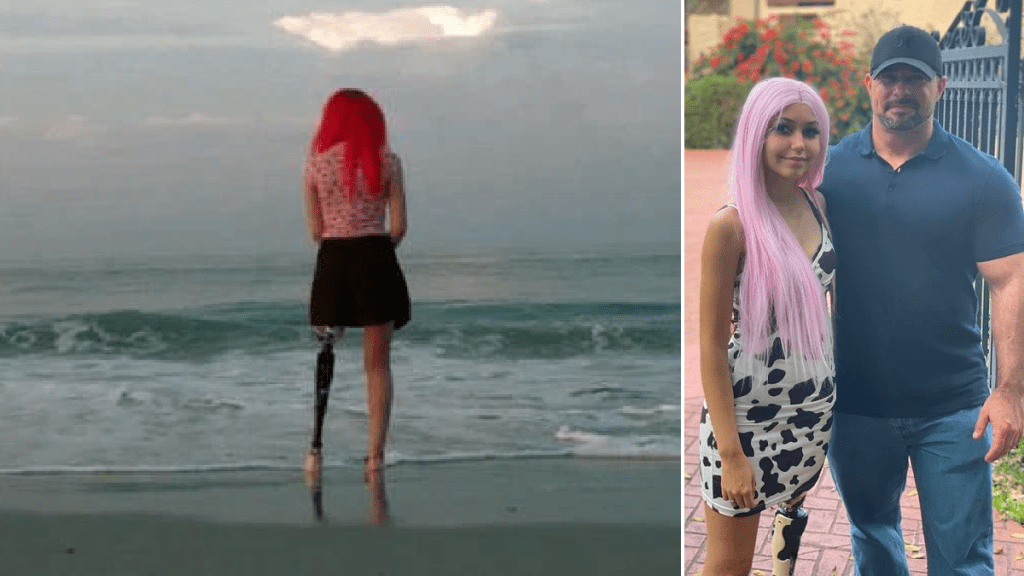 Paige Winter, who was 17 years old when a shark bit her leg and fingers and only let go when her father punched it repeatedly, has opened up about the life-changing encounter two years later. Winter, now 21, recounted that the shark went through her leg like a ‘paper shredder’ – yet she does not hold a grudge.

Winter relived the June 2019 attack in a documentary that is part of National Geographic’s SharkFest series this month. She recalled going to Fort Macon beach close to her home in North Carolina with her father Charlie, her sister, her best friend and her dad’s girlfriend and her young son.

‘We all decided to get back into the water. We went quite a way out but it was shallow, I never go out further than I can touch the floor,’ Winter told the Mirror. ‘We were pretending we were mermaids, throwing ourselves backwards.’

Winter said she turned around and saw her father trying to sneak up on them and everyone was laughing.

‘I jumped backwards in the water again and felt something grab my ankle. I was like, “Real funny, dad,”‘ Winter said. ‘My dad and I have always done that, swam under the water to grab each other’s legs, so I just thought it was him.’

It didn’t take long for Winter to realize it was quite painful. She looked around and saw that everyone she had gone to the beach with was there and wondered if it was a stranger grabbing her.

‘Then I got pulled underwater and I was like, “OK, this isn’t right”. It took me a second to realize, ‘Oh Jesus, it’s a shark,”‘ Winter said.

That is when Winter said she got ‘completely dragged’.

‘Like those horror movies when the person is dangling their foot over the bed and gets dragged under,’ Winter said. ‘Then he started thrashing about, like when a dog is playing with a rope and shakes it from side to side, the shark was doing that to my leg.’

Winter said she tried to pry the shark’s mouth open ‘like a bear trap’ and it let go momentarily but then went for two of her fingers.

‘For a second I had kind of resigned myself to that being the end, but after that I was like, “I can’t not be around. I need to survive,”’ Winter said.

That is when her father began wrestling the shark, hitting it repeatedly until it finally let his daughter go.

Pulled out of the water and on the beach, Winter remembers seeing her leg and thinking, ‘that’s gross’.

‘It was pretty much like it had gone through a paper shredder,’ she said.

Winter had her leg and two fingers amputated. Despite her life changing forever, she does not hold hatred toward her attacker.