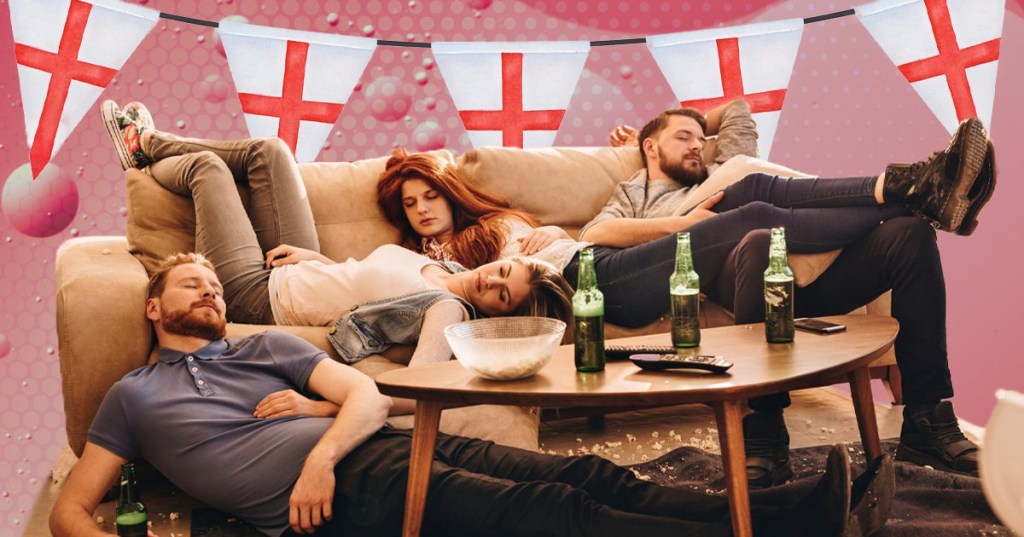 It has been a historic few weeks for English football and we Brits have celebrated in the only way we know how – by getting completely trashed.

Every time football inched closer to coming home, we ordered another round of shots. For every ball in the back of the net, another pint was sunk.

But with late, mid-week kick-offs, extra-time and penalties – we have all been burning the candle at both ends. And last night’s final has probably finished you off.

With England making it to their first final in a major tournament in more than 50 years, it was inevitably going to be a heavy one. And, you’ll probably agree that it was worth it.

But now it’s Monday morning and we have to go to work with tequila breath, a banging headache, and waves of nausea that are making us feel seasick.

So, if your day is looking bleak due to too much booze and not enough sleep, we’ve asked the experts to share their tried-and-tested hangover remedies to get you through:

‘Try to drink eight glasses of water from as soon as you wake up. You may want to add detoxifying citrus fruits such as lemon and lime to the water or even cucumber and strawberries.’

‘Another method of easing a hangover if you have an early start is to add two teaspoons of fresh lemon juice and one teaspoon of honey to a glass of warm water and drink slowly. You should do this as soon as you wake up and throughout the day.’

You might think caffeine is exactly what you need, but David Souter from My Fitness Trainer suggests you should swerve that flat white.

‘Stay away from coffee as this is a diuretic,’ says David. ‘Instead, opt for water or an isotonic drink, but my favourite is coconut water. Coconut water is high in electrolytes which your body has lost due to being dehydrated – or if you have vomited.’

Catch up on sleep

This won’t feel like the most useful advice if you have a 7am alarm that you can’t get out of. But it’s important to try to make up for the lack of sleep where you can.

‘Getting plenty of sleep is imperative,’ says Abbas. ‘Of course, if you have to work this is tricky so ensure you get an early night once you’re home, so don’t feel exhausted the next day.

‘Two-day hangovers can happen if you have consumed excessive amounts of alcohol.’

We definitely want to avoid this.

The hangover breakfast is tricky thing to master.

When you’re in a really dark place it can be hard to know what you want, and the thought of consuming anything can make you feel a bit green. But eating is really important.

‘Eating a good breakfast is a quick and effective way to reduce hangover pain,’ says Abbas. ‘Greasy, fatty and salty foods will help slow the absorption of alcohol in the blood.

‘Just ensure you do not overdo it on the greasy foods as this could end up upsetting your sensitive digestive system and you may feel even worse.’

Prevention is better than cure

Look, we know the ship has likely sailed on this one, but we can’t not mention the fact that drinking less is the best way to avoid a hangover, sorry.

There are some other things you can do before and during a drinking session to limit your symptoms too, maybe you can try these next time England reach the finals.

‘When you do start drinking, ensure that in-between drinks you are drinking a glass of water or a non-fizzy drink,’ says Abbas. ‘Fizzy drinks actually speed up the absorption of alcohol in your body so it’s best to avoid these at all costs.

David adds that it’s really important to eat before a drinking session as well. So leave your old ‘eating’s cheating’ mantra at the door.

‘Do not starve yourself before you go out. Your mum was right, you need to line your stomach.

‘If you forget this part, try to avoid the fast food shop on the way home. Instead, have some jam and toast when you get home to elevate and maintain your blood sugars.’

‘Drinking less is the most obvious way to pre-empt a hangover and hangover-related anxiety,’ says Phil Bridges, founder of mental health organisation The Mind Map.

‘However, your drink choices play a part. Studies show that “congener methanol” is associated with hangover symptoms.

‘Instead, look to drink colourless drinks – such as gin and vodka – which have low levels of congeners.’

When you’re hanging it can be tempting to hibernate indoors all day.

But if you’re working from home, or in the office, finding time to get outside could be just what you need.

‘Getting yourself outside and breathing in fresh air may also help, as this will allow oxygen to the brain and lungs and may also help you feel less sick,’ says Abbas.

‘Try deep breathing exercises when you are outside to allow even more oxygen into the lungs and blood.’

‘If you’re having to work today, take some time out to get outside. Gently move and stretch, and take in some long, slow deep breaths of fresh air to re-oxygenate and invigorate your body and brain.

‘Even better, if you can get to a nature spot and surround yourself with green – which is healing in itself.’

‘If you’re at home today, relax, and don’t go too hard on yourself. You’re allowed to, in the spirit of England’s first Cup Final since 1966 – this is no small affair,’ says Leighton.

‘Take some time in the garden (if you have one). As hard as it may seem, try to moderate the caffeine today – it will only tax those adrenals even more.’

OK, so caffeine may be off the table, but Leighton has some other natural tricks up his sleeve that could help you feel better.

‘Take a long, hot bath filled with magnesium salts to relax those muscles and sooth any headache,’ he suggests.

‘Pamper yourself with some natural, eco-friendly products that will nourish your skin and your conscience.

Dr OBT, founder of Halcyon Aesthetics, agrees that tackling a hangover should be a holistic process.

‘It’s just as important to heal your mind, because it’s the post-hangover blues that can kick in and have a slight toll on your mind,’ they say.

‘Keep a bottle of lavender oil in your bag, have a sniff here and there – add a few droplets around your workstation if you’re at work. Avoid too much caffeine – instead, relax with a herbal tea, indulge in some fruit and a warm breakfast – a bit of grease completely fine, don’t punish yourself.’

Touted as a miracle remedy for almost any ailment, this could be the perfect time to try CBD oil if you haven’t before.

‘The most niggling part of a hangover is definitely the headache,’ says Andrew Nicholas, founder of mellowzeus.

‘CBD oil soothes inflammation throughout the body, which lessens the pain of a headache – but you need to drink lots of water alongside this to truly rid yourself of that hangover headache.

‘We definitely recommend taking a spray of CBD oil before bed and when you wake up to ease that banging head.’

He adds that CBD could also help with the dreaded hang-xiety.

‘That edgy feeling the morning after drinking that you can’t quite put your finger on, happens because of the way that alcohol impacts your brain,’ says Andrew.

‘I’m sure you’ve heard that alcohol is a depressant – the chemical imbalances that happen after drinking can cause anxiety as well. CBD oil has been proven to aid anxiety by soothing the messages along the central nervous system that tell your brain to be alert and anxious.

‘Add in the anti-nausea benefits too, and it’s honestly your go-to before you sleep off a hangover, and when you wake up.’

Before you start necking raw eggs and performing ancient rituals in the garden, have a read of our debunk of these common hangover cure myths:

Hair of the dog

‘The “hair of the dog” method is a key myth, with many having another drink first think thinking this will ease any pain,’ says Abbas. ‘But it could actually leave you feeling even worse and even more tired, due to the alcohol content being drunk when your body’s already trying to absorb the current alcohol in your system.’

David vehemently agrees with this: David: ‘Hair of the Dog! No!’ he says.

‘Having another drink will not cure your hangover. It may mask your symptoms for a short time but that hangover is coming, now or later. Deal with it rather than prolong the suffering.’

‘Another myth is that you can simply sleep it off,’ says Abbas. ‘Yes, your body does need rest, but if you are exhausted and trying to feel better for a day of work you want to get your blood moving, get breathing a bit faster, and be awake so you can drink plenty of water and urinate out the alcohol.’

Vaccine site halts jabs after being targeted by anti-lockdown protesters

As a doctor in Delhi, I am broken after battling India’s devastating second wave

‘A coffee may make you feel temporarily alert, however you will soon crash and actually it does not help your body process the alcohol any faster,’ he explains.

There is some truth in this myth – but given how unpleasant it would be, it might not be worth it.

‘Raw eggs have also been noted to relieve hangovers, this may be part true because raw eggs contain cysteine which helps to remove toxins form the body,’ says Abbas.

‘However, just drinking plenty of water is a better and safer way to detoxify the body as opposed to drinking raw egg.’


MORE : This is why people who don’t usually watch football suddenly get obsessed with big games


MORE : These are the most popular dog breeds in the UK – and the best dogs for long walks


MORE : How to cope with anxiety about spending money now the world is open again