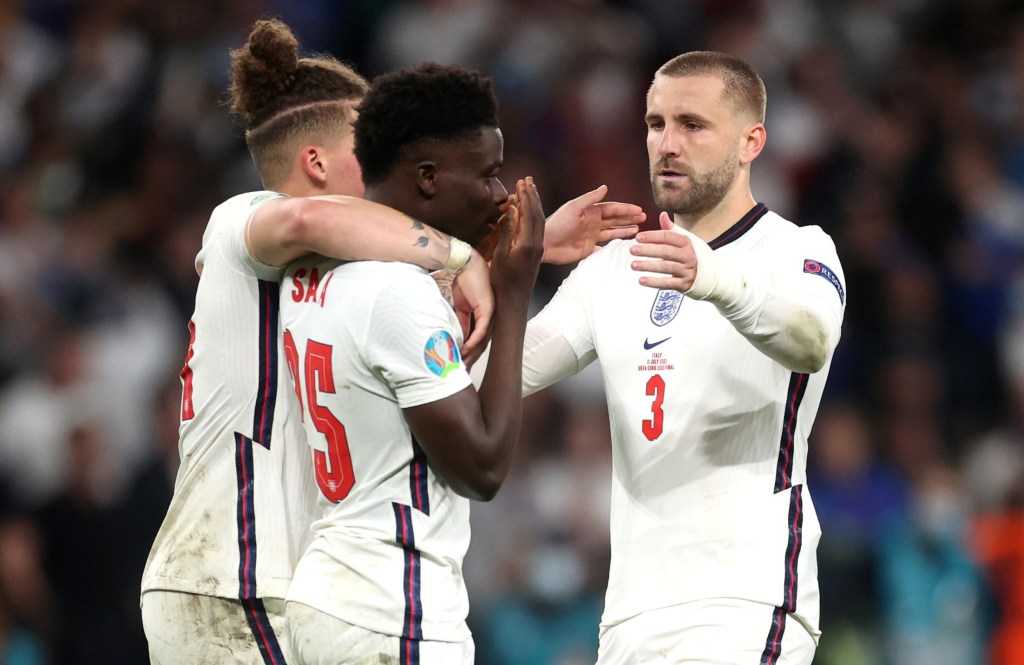 Shaw gave England the perfect start at Wembley as he scored inside two minutes but Italy were able to force extra time and penalties after Leonardo Bonucci’s equaliser in the second half.

Marcus Rashford and Jadon Sancho missed their penalties, while Saka’s decisive spot kick was saved by Gianluigi Donnarruma to hand the victory to Italy.

A tearful Saka was consoled on the pitch by his England teammates as well as Gareth Southgate.

And Shaw, who has developed a close friendship with Saka during their time together with England, is adamant that the Arsenal winger has the full support of his teammates.

‘He’s devastated,’ Shaw said of Saka after the game.

‘But I think the most important thing for us now as a team is obviously to be there for him.

‘We gave him a big hug, told him to keep his head up, it happens.

‘It’s a penalty shootout, anything can happen as a lot of people know. It’s an experience he’ll learn from but we’re all behind him, he knows that.

‘Not just him, Rashy and Sanch, we’re with them all, we win as a team and lose as a team. There’s no individuals who cost that.’

Meanwhile, England captain Harry Kane believes England’s progress at Euro 2020 should be a sign of encouragement ahead of next year’s World Cup in Qatar.

‘You’ve got to hold your heads up high,’ said Kane.

‘We’ve had a fantastic tournament and these things can happen. Penalty shootouts, you go through your process, you put it where you want to put it but anyone can miss a penalty.

‘We win together and we lose together. We’ll learn and grow from it, and it will give us even more motivation to do well in the World Cup next year.

‘We should be extremely proud as a group of what we’ve achieved. We’re all winners and we want to win so it’s going to hurt for a while and it’ll probably hurt for the rest of our careers but that’s football.

‘We progressed well from Russia and now it’s about continuing that. We’ve got a great squad with loads of young players hungry for more football like this so that’s all we can do. Build and learn and hopefully go into next year in a better way.’