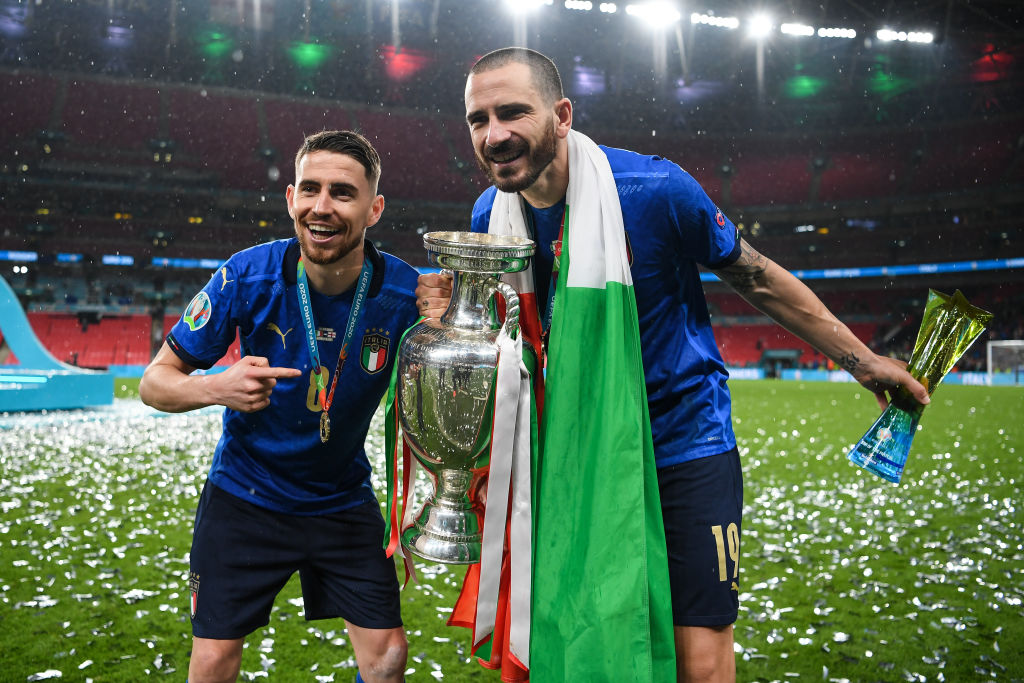 Jorginho and Leonardo Bonucci wasted little time in trolling England after Italy prevailed on penalties to win Euro 2020, with the pair proudly singing ‘it’s coming Rome’ during the visitors’ wild celebrations at Wembley.

Gareth Southgate’s Three Lions got off to the perfect start as Luke Shaw’s half-volley broke the deadlock after just one minute and 57 seconds but Roberto Mancini’s men levelled through Bonucci’s scrambled effort midway through the second half to take Sunday’s showpiece to extra time.

The two teams still could not be separated after 120 energy-sapping minutes and England’s miserable 55-year wait for major silverware continued as Jadon Sancho, Marcus Rashford and Bukayo Saka all missed in a nail-biting shootout.

Jordan Pickford had looked to have dragged the hosts back into the contest with a brilliant save to deny Jorginho after earlier stopping Andrea Belotti from 12 yards.

But Saka’s decisive strike was palmed away by Gianluigi Donnarumma, securing the Italians a second penalty shootout victory in as many matches and a second European crown following their previous triumph back in 1968.

Bonucci came away with the man-of-the-match award after yet another inspired showing alongside fellow centre-back veteran, Giorgio Chiellini, while Donnarumma was named player of the tournament.

Shortly after the final whistle, an impassioned Bonucci screamed, ‘It’s coming to Rome!’, directly down the lens of a nearby camera, a clear reference to England’s famous slogan – derived from 1996 anthem ‘Three Lions’.

And Chelsea midfielder Jorginho joined the Juventus defender in poking fun at the English in the visitors’ dressing room.

There have been growing calls for Jorginho to be among the Ballon d’Or nominees after winning the Euros and lifting the Champions League trophy at club level with Chelsea.

But the midfielder brushed off talk of individual prizes in his post-match interview with beIN SPORTS and stressed that was instead focussed on ‘enjoying the moment’ with his Italy team-mates.

‘It’s incredible. It’s hard to find the words to explain my feelings right now because I’m so grateful, I’m so, so, so happy,’ he said.

‘It has been a long way and to have this feeling with this group, with all these people is just amazing.’

‘I don’t want to talk about that, I don’t think about that. I just want to enjoy this moment with these guys.’