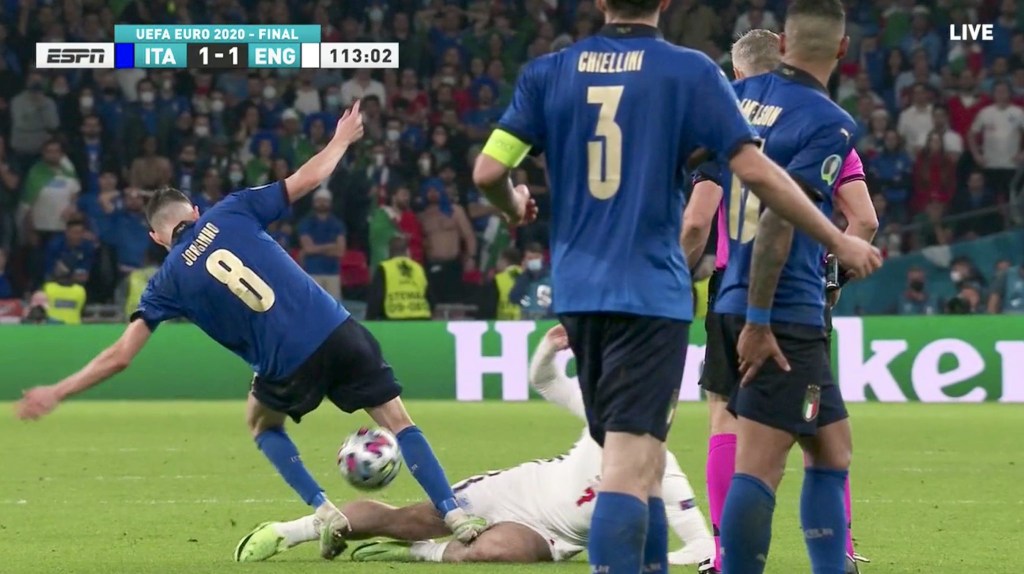 Frank Lampard and Alan Shearer believe Jorginho should have been sent off for his foul on Jack Grealish in England’s Euro 2020 final defeat to Italy.

Luke Shaw’s early goal gave England the perfect start at Wembley but Leonardo Bonucci’s equaliser in the second half forced the game to go to extra time and penalties.

But before the tense shootout, Jorginho ran the risk of a red card following a dangerous challenge on Grealish.

After making contact with the ball, Jorginho forcefully followed through and his studs caught Grealish’s left thigh.

Dutch referee Bjorn Kuipers gave a yellow card to Jorginho but Lampard believes the Chelsea midfielder would have been sent off for making the same challenge in a Premier League game.

‘It feels like it follows on from VAR,’ Lampard told the BBC.

‘There’s been a lot of good things about VAR, but I’m pretty sure in the Premier League that gets looked at on the monitor and it’s a red card.

‘It’s not always easy to nail them straight away. But I think it’s a red card when you see it there.’

Former England striker Alan Shearer also believes that Jorginho should have been dismissed.

‘It’s careless, it was endangering the safety of an opponent,’ said Shearer.

‘It was over the top and it should’ve been a red card.’

Meanwhile, England midfielder Jordan Henderson was reluctant to call for a red card but admits Grealish’s legs have been cut following Jorginho’s challenge.

Asked if he felt Jorginho’s tackle deserved a red card, Henderson told beIN Sports: ‘I’m not sure, I think at the time it looked bad.

‘Jack’s got a lot of cuts on both legs.

‘You can’t really look at that, it’s one of those things. We gave absolutely everything, we kept pushing in extra time but couldn’t find a winner and when it goes to penalties it’s a bit of a lottery.’