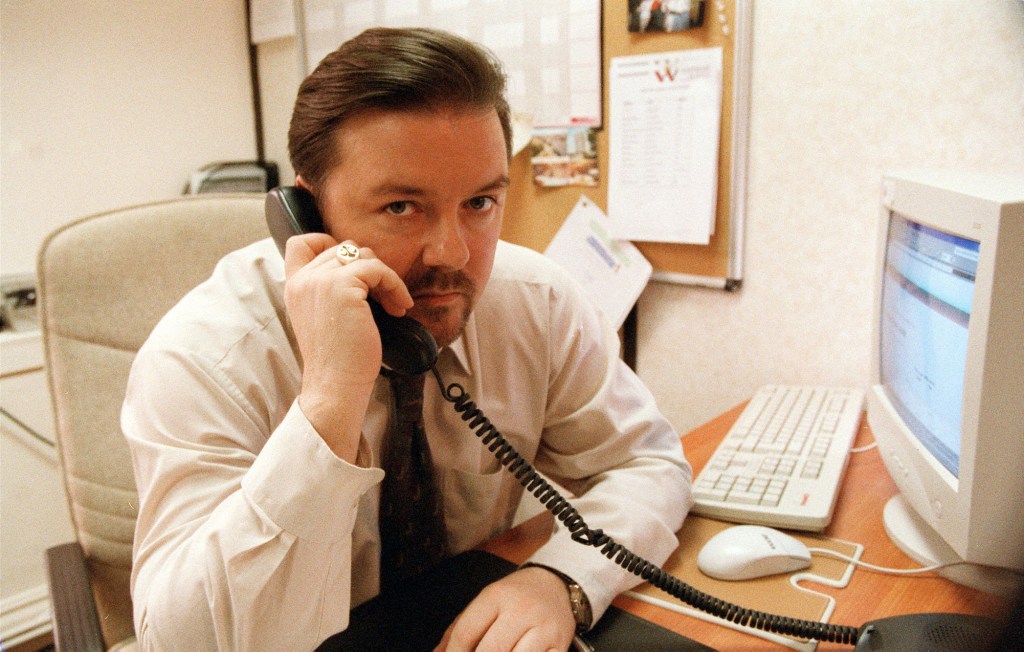 It was 20 years ago when a disparate group of mostly young and inexperienced actors caught the train down to Teddington, to film a new BBC series called The Office.

Expectations beforehand weren’t exactly through the roof. Most of them hadn’t even seen a script before shooting began, and only vaguely knew the premise of the show – a comedy based on the exploits of middle management bore David Brent and set in a regional branch of paper merchants Wernham Hogg, written and directed by relative unknowns Stephen Merchant and Ricky Gervais.

They could have had no idea what was in store, and how much it would change their lives. It soon became clear though that the cast and crew were playing a significant part in one of the most enduring comedies to be released on UK television.

The show made household names of Merchant, Gervais, Martin Freeman and Mackenzie Crook, but for fans who’ve seen it enough, the background artists on the show helped make the series what it was.

We spoke to three actors who appeared in all of the episodes of The Office to see what it was like to play a part in one of the greatest comedies ever made.

Emma Manton, Alexander Perkins and Philip Packard all had small but recognisable roles as Wernham Hogg office drones, and told us all about their experiences.

It was important to Merchant and Gervais to hire in real actors to perform as members of the Wernham Hogg staff.

They wanted to choose people with the chops for sparky improv work – even if most of the time they’d be filling the copy machine and sitting behind their desks in a real, working office.

The format meant the actors were always on call, seeing the series developing before their eyes.

‘On other TV shows, if you’ve got a smaller part then you’d be in a green room, or you’d be waiting in a trailer somewhere,’ Alexander said. ‘So we all got a real sense of how it was coming together.’

‘I was there for all of it,’ Emma said. ‘Everything was set in the office pretty much and occasional bits in some of the meeting rooms, so I was watching these key directing decisions being made.’

Just as the show captured the mundanity of 9-5 in endlessly uninspiring Slough, so too did the days on set.

Just as we see them on screen, the actors were at their desks for hours at a time, often staring at bulky 00s desktop computers unconnected to the internet.

‘The first series was boring for parts of it,’ Phillip admitted, referencing the repetitive nature of the filming.

‘The second series was different though, because we all knew how great it was.’

Thank goodness for Minesweeper and Texas Hold’em, then

How did they occupy their time between takes? By playing naff computer games for hours on end.

Emma said: ‘We had limited access to anything on the computers, they certainly weren’t online. So there was always a fight to try and get your monitor which was in shot. If your monitor was in shot, they had to plug it in, which meant that we could play Minesweeper.’

Alexander added: ‘The first year all the computers had Solitaire on them. And I think the next year, they installed this Texas Hold’em game. It wasn’t connected and wasn’t for real money or anything, but it was just something we could just sit and play on.

‘I think Ewen Macintosh [who famously plays Keith in the series] managed to make a virtual million pounds during this series playing that poker game.’

There was little time for preparation – but room for improvisation

As it turns out, most of the time the supporting cast had no idea what they’d be filming on any given day.

‘The first time I saw the script was when we were filming the pilot, which is the first episode,’ Emma said, talking about going into the project completely blind.

‘At my level of the cast, we weren’t given scripts,’ Phillip added about the fist series.

There were, however, chances for minor characters to be developed via improvisation.

Ewan’s character Keith was one who grew to become a big part of the series despite been intended as a background presence. Emma said Merchant and Gervais wrote him into the show more after a moment of improv shared between her and Ewen.

‘[Keith] came out of a little improvisation that happened when they just turned the camera on one day. I think we were both called in to talk about the redundancy being faced by the Slough branch,’ she said.

‘So we just sort of did a little improvisation and then they realised they could really make something. It was a very creative collaborative process.’

Their favourite time on set? It could only be one thing

Everyone remembers the David Brent dance – the moment where, usurped in the popularity stakes by boss Neil Godwin (Patrick Baladi) once again, he breaks into a toe-curling routine during the Red Nose Day episode.

It’s a sequence that will live forever in the minds of British comedy fans, and the supporting cast knew something special was happening at the time.

‘I do remember that day of just sitting there, watching that dance,’ Alexander said. ‘That was great. I knew the cameras weren’t on me and I remember thinking “I’m just gonna sit here and watch” because it was amazing.

‘I think it was filming the dance,’ says Emma. ‘Martin Freeman begged him to show us what he was going to do, but the first time we saw it was on the show.’

They never saw the success coming

‘I knew I found it funny,’ Emma said. ‘I knew that my friends would find it funny, but I assumed it’d be that kind of nice comedy that everyone sort of shares amongst themselves and becomes a bit of a cult. I had no idea that it was going to be as mainstream or as successful as it was.

‘It was just such a little job at the time, but one that everybody cared about. No one thought it was going to be anything other than a little late night filler.’

The Office at 20: What was it really like to star in every episode?

Phillip added: ‘Every day something would happen where we were helpless with laughter. That’s absolutely true. I think with everything I’ve done since then in acting, it didn’t have the same atmosphere.’

‘They were really lovely,’ Emma said, discussing the merits of working with first time directing and writing team Gervais and Merchant.

‘They found out the direction to take things by making each other laugh, and that’s a lovely thing to be around.’

She added: ‘It was a company led by the nicest people in the world. Martin Freeman, Lucy Davis, Mackenzie Crook… I mean, these are just golden people that you’d want in any cast.’

The Office is available to stream on BritBox.