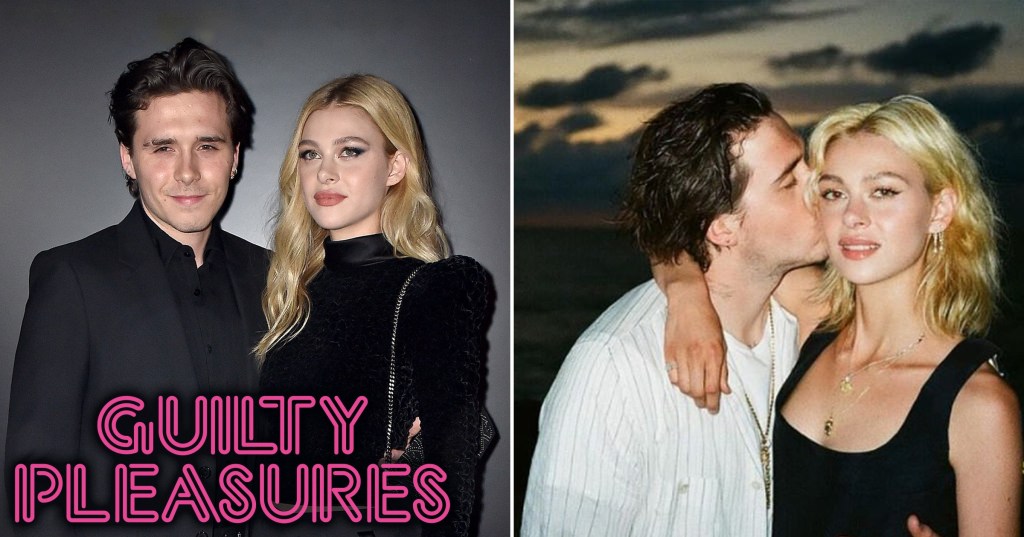 Victoria Beckham could be picking out her fascinator as you read this… her eldest son Brooklyn is finally able to plan his delayed wedding to Nicola Peltz.

The 22-year-old looked excited as he posed with a woman who appeared to be his wedding celebrant.

In a sign that the big day is imminent, Nicola posted the snap of her hubby-to-be with the caption: ‘First wedding meeting.’

Brooklyn popped the question to American actress Nicola, 26, last July. But, like many engaged couples, they were forced to postpone the wedding.

Last summer the mother of the groom couldn’t wait to get cracking as she whisked the couple off to Puglia in Italy to inspect possible venues.

Instead, during the delay Brooklyn and Nicola poured their efforts into finding a starter home in LA.

It just happens to be a £7million Hollywood mansion — her dad is US billionaire Nelson Peltz.

Posh, 47 — whose Spice Girl bandmates are celebrating 25 years of Wannabe this week — has said of her future daughter-in-law: ‘We couldn’t have asked for a more adorable lady.’

Colin in tears over homeless ravaged by Covid-19

Colin Farrell couldn’t mask his emotions when he broke down in tears during an interview on US TV.

It started as an upbeat chat but the Irish actor’s mood dramatically changed when he talked about passing so many homeless people, left in tatters by Covid-19, while on his way to the Jimmy Kimmel show in Hollywood.

The Penguin actor fought back tears as he said: ‘The homelessness here. It’s pretty tough to see. I don’t get it. Am I doing anything about it right now? No.

‘I’d like to think about doing something about it. I don’t understand how so many people can be on the street.’

After the 45-year-old acknowledged his own good fortune, fans tweeted that Farrell had ‘a golden heart’.

He said: ‘I say that knowing full well how fortunate I am. I live in a nice house, I have a very safe existence. But I don’t get it… I don’t get it.’

Farrell is already back in shape after piling on the pounds to play the villain in The Batman and a rugged seafarer in The North Water for the BBC.

It’s not the invisibility cloak… Dan to miss Potter reunion

Fans will be gutted to hear the former child wizard has no plans to turn up and celebrate with castmates Emma Watson and Rupert Grint in November.

Dan, 31, said: ‘I’m in the Dominican Republic at the moment filming, then I’m going to be busy, working on bits and pieces until the end of the year.

‘So yeah, I don’t know if we will be getting together. I’m sorry if that’s a disappointment to anyone.’

Grimmy’s night with his Taste buds

And food is clearly the way to a man’s heart after the 36-year-old Drivetime star took his dancer lover Mesh Henry to the launch of Taste Of London in Regent’s Park, where they were joined by Daisy Lowe and writer Jack Guinness.

Grimmy recently joked about the grub on his Celebrity Gogglebox stints.

He said: ‘Channel 4 pay for the snacks so you can have whatever you want. At the start we wanted to be healthy, but now we just have crisps.’

Mariah Carey’s ex-husband Nick Cannon insists all seven of his children were planned — after having four kids with three different women in the last six months.

‘I don’t have no accident,’ Nick, 40, said on his Power 106 radio show. ‘ There’s a lot of people that I could’ve gotten pregnant that I didn’t. The ones that got pregnant are the ones that were supposed to get pregnant.’

He became a dad for the seventh time when girlfriend Alyssa Scott gave birth to their son Zen at the weekend.

Moroccan and Monroe, his twins with Mimi, are now ten.

Dominic’s a singles draw at Wimbledon

Centre Court was definitely the place for celebrity PDAs this week… but Dominic West left his wife at home when he hit SW19 on his own yesterday.

He and wife Catherine Fitzgerald, 50, were forced to declare their marriage is ‘strong’ last year after he frolicked in Rome with 32-year-old co-star Lily James.

Dominic’s solo outing was in contrast to love matches who put on a show this week, such as Maya Jama and Ben Simmons, Phoebe Dynevor and Pete Davidson and Eddie Redmayne and Hannah Bagshawe.

Nicole Scherzinger proved she truly is an honorary Brit after giving the Italians bum-thing to be distracted by ahead of their clash with England in the Euros final.

The Honolulu-born Pussycat Doll stretched out on a jetty at Lake Como, where she is on holiday with British rugby star Thom Evans after turning 43 this week.

The couple are among several stars busy country-hopping as they have also been in Monaco and Mykonos — where Robbie Williams was spotted on a superyacht.