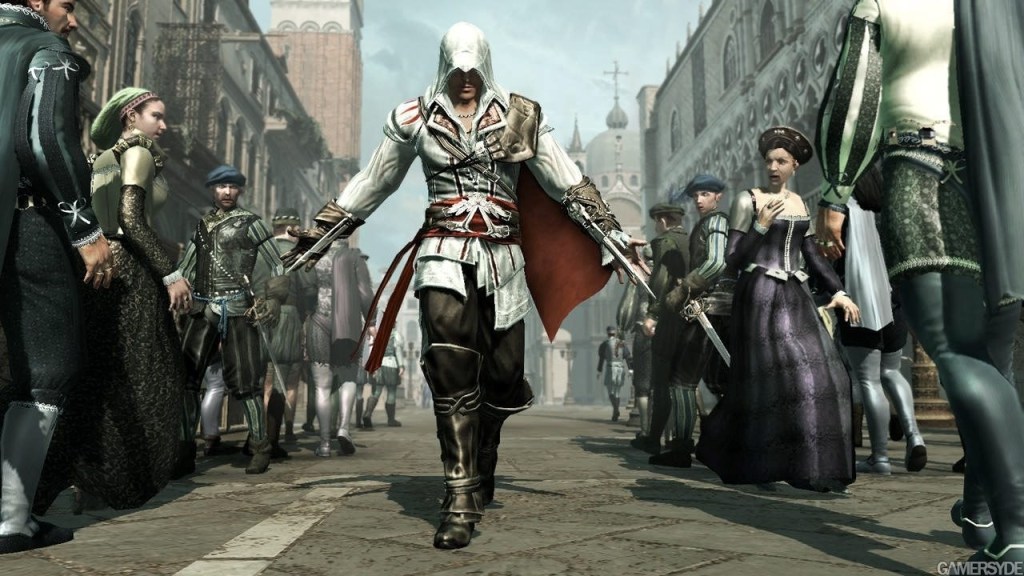 The Thursday Inbox is angry that Nintendo still hasn’t fixed the Joy-Con problem, as one reader wishes Sony had been at E3 after all.

Infinite choice
So that Assassin’s Creed Infinity announcement was almost completely nothing, and yet it’s obviously going to be a very major thing, taking up Ubisoft’s two biggest studios. I like the idea of each game acting as a giant expansion for a service that lasts for years and years, but I can’t help feeling that there’s a fundamental problem with Assassin’s Creed, and that’s its story.

They’ve really pulled back on all the modern day stuff nowadays but to the point where it’s hard to keep track of what’s going on – and even harder to care. Personally, I think it’d be a lot better if they just dropped the whole Animus thing and just said they were time-travelling. That would be a lot more straightforward, it’d allow different characters from different games to interact, and it would make the Infinity idea a lot more interactive.

They’re almost certainly not going to do that though, which I feel is a shame. So instead we just get to speculate on what will be the setting of the next game. I wonder if the Infinity concept is also a way to justify going back to yearly sequels, as they can present them as not entirely new games, so it doesn’t look like they’re milking them so much.

I think Japan would’ve been the obvious choice before Ghost Of Tsushima but I can’t see Ubisoft doing that now, unless they picked a time period that was radically different. But I don’t think things really changed that much, in terms of what the gameplay would be, until close to the 20th century. So I’m going to say South America and India are my preferred choices, and also quite likely. I’d also say China had a good shot. There’s a lot of good choices left so I hope they make a good job of them.
Clarion

Solo concerns
I’ve been a fan of GTA since GTA 1, playing the first game on my brother’s Pentium PC 166 to death. I went on to play most of the other GTA games, apart from GTA London and GTA Vice City Stories. I would primarily be buying GTA 6 for the single-player when eventually it releases as although I understand people enjoy GTA Online it doesn’t appeal to me, unfortunately.

I can’t believe it is 20 years this year since I got a PlayStation 2 and Grand Theft Auto 3, I hope they celebrate the anniversary with other things than just online DLC for GTA 5.
Andrew J.
PS: Bridge Constructor: The Walking Dead and Ironcast is free on Epic Games Store from 4pm on Thursday 8th July.

Ahead of schedule
I was wondering if GC could clarify something for me, as I have seen two readers now say it in recent inboxes. They said that Microsoft are going to have one exclusive per month after Halo Infinite, but I thought they promised one per quarter going forward but maybe they meant one first party exclusive per quarter and then the other months would be occupied with third party exclusives. What exactly did they promise?
Angry_Kurt (Twitter)
Now playing: Mario Golf (NS)

GC: Microsoft said at least one a quarter. The readers may have been referring to the fact that Microsoft Flight Simulator, Psychonauts 2, Forza Horizon 5, and Halo Infinite are all on the way this year, although that’s still not quite one a month.

Positive reaction
I’d like to share some praise for a couple of companies (rare for me), but if we take a minute to ignore all the Switch Pro rumours, the OLED version is a welcome upgrade. The stand is a decent improvement, an Ethernet port might not be top of everyone’s list but is welcome and the screen I think was needed. If you already have a Switch, you likely don’t need this, but there’s nothing requiring you to get it either.

Second bit of praise is to Backbone. I received my iPhone controller from them today and this thing is even better than I expected. It’s solid, looks nice, the apps’ decent and unlike the Switch it has analogue triggers. When the Switch came out, I wanted a handheld Xbox and now I basically have one with either remote play or xCloud.

Which brings me back to the Switch. For portable gaming, the Switch needs to stay better than phones. If controllers like this, which essentially make something better than a Switch (in terms of hardware), gain in popularity then the Switch would just become inferior in TV and handheld. So, I think the OLED screen was needed. 7″ is bigger than the average phone and being OLED gets the colours back up there too.
Tim

Best buy
I loved Dishonored but have only just got round to playing Dishonored 2 (forced self-isolation isn’t all bad!) and it’s made me really excited for the Deathloop showcase this week. I think Arkane are incredibly talented and are one of the reasons Microsoft’s acquisition of Bethesda might end up convincing me to buy my first ever Xbox.

The other reason is, or rather was, The Elder Scrolls 6, but the news of how far out this is likely to be is really disappointing. I know that it was never going to be anything other than years away but if it suffers even some minor delays it could end up being cross-gen with the next console generation! I think I’ll just play Skyrim again.

Or maybe The Forgotten City, a Skyrim mod that’s being released as a full standalone game at the end of this month. Do you think you’ll have a chance to review it? I’d be interest to hear from other readers who have played the mod or who are thinking about buying the game.
Michael622632 (PSN ID)

GC: We’ve never played the mod, so we’ll definitely be taking a look at it.

Broken response
All I ever wanted from a Switch Pro was non-drifting Joy-Cons. I’ve been putting off purchasing a Switch for years now, in the naïve assumption Nintendo would fix the design. I can’t be the only one who finds it scandalous that in four years they’ve never fixed the issue.

Although I’m happy the Switch saved Nintendo, I resent rewarding companies for failure by buying their faulty products. I hope the Switch OLED has fixed it but I’m pessimistic. This is, after all, the company that built a business on the principle that the customer is always wrong.
Phil

GC: You’re completely right, it is a scandal. And if it is fixed with the Switch OLED they’ll never say, as that would be drawing too much attention to the original problem.

Happily underwhelmed
Nintendo has announced the rather underwhelming new Switch model and I’ve got to say… I like it. I’m not going to upgrade, as there is no point, but because it’s such a minor upgrade that means they won’t repeat the mistakes they made with the New 3DS (i.e. a ridiculously confusing name and splitting the userbase by having exclusive games). So, unless something catastrophic happens, I won’t be forced to buy one.
Joseph Dowland

GC: We’re not sure Fire Emblem Warriors and a port of Xenoblade Chronicles really counts as splitting the userbase. The name was terrible though.

Games Inbox: Is the Nintendo Switch OLED worth it?

Swish Pro
I realise that the Switch OLED is going to appease precisely no-one who was in any way looking forward to the much hyped up (and now back to being mythical) Switch Pro, but I must confess I quite like how it looks. I’m not even talking about the extra screen real estate either. Given the trends in console design over the last few generations, I’ve always felt the Switch to be something of a visual triumph

True, it’s not Michelangelo’s David or anything, but y’know, it’s kinda friendly looking at least. However, the OLED’s press shots of the black and white colour scheme make me wonder if Nintendo have missed a trick in not renaming it the Swish…

It’s certainly a better looking take on a black and white console than the PlayStation 5 anyway. A friend of mine was lucky enough to bag one of those a few months back and man, that console is a lot bigger and
uglier in the flesh than I thought it would be. Thankfully, I’m in no rush to buy either, or even splash out on a (simplistic, but much less aesthetically challenged) Xbox Series X/S, as I hardly ever use my Switch in handheld mode and I’m still trying to crunch though a huge game backlog on my less than four-year-old PS4 Pro.

I really hope by the time I get around to wanting a new machine there are some mid-gen redesigns out, or at least around the corner.
yourhomeisatrisk

Inbox also-rans
To Andrew J. (or anyone else who has a PC Engine Mini), I found out today there are a few little bonus versions of games accessible mainly by pressing Select when starting the game from the menu. Nothing earth shattering on there, and it’s only on about five games I believe, but it’s still a nice little touch.
John Atkinson

There’s no point arguing it now, but I really wish Sony had just done a proper E3 all-in-one then lots of these little piecemeal events. Now we’re just sitting ere for the rest of the year wondering when the ‘good one’ will be. I wonder if they regret their decision now, given Microsoft is regarded as having won E3.
Shinda

This week’s Hot Topic
The subject for this weekend’s Inbox was inspired by reader Grackle, who asks what one feature would you add to the next sequel in your favourite franchise.

It doesn’t matter whether the sequel has been announced already, or how likely it is, but we want to know what you’d do to improve your favourite game. It can be something small, like a change to the control system, or something like a change of perspective from third to first person. Or perhaps a change of art style, story, or combat system.

Is your choice something relatively trivial, that’s only meant as a bit of fine tuning, or something that will fundamentally change the nature of the franchise? How likely do you think it is that your idea will make it into a future game?