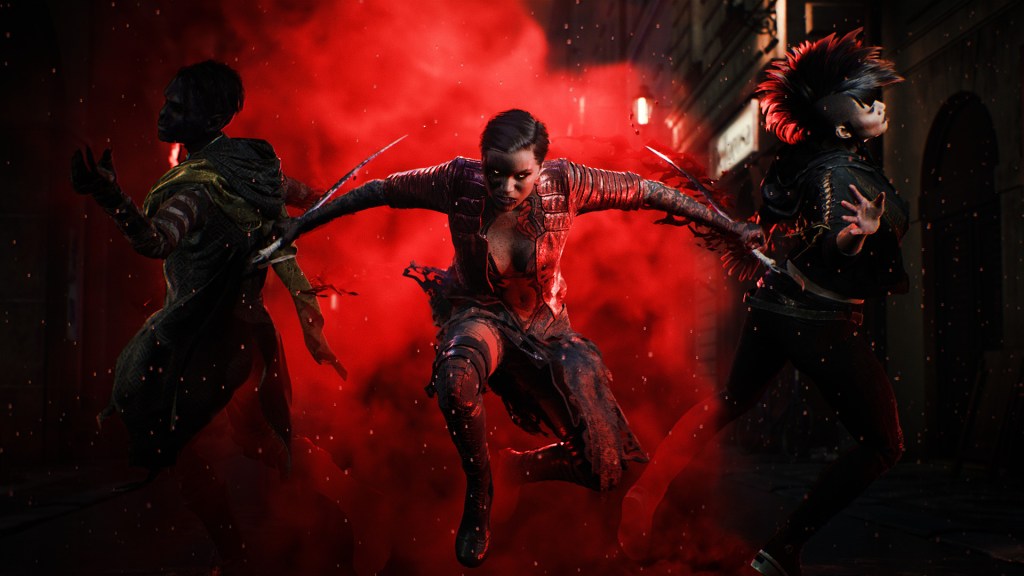 GameCentral plays the unlikely mix of Vampire: The Masquerade and Fortnite and discovers an interesting twist on the battle royale formula.

Vampire: The Masquerade is a rare thing in the geek world – a genuine cult brand. It’s loved by its closest fans but remains obscure in terms of mainstream pop culture. The franchise, best known for its 1991 tabletop incarnation and 2004 video game Bloodlines, has die hard fans that associate the franchise with deep, character-driven role-playing games. That’s why said die hard fans may not know what to make of the mouthful that is Vampire: The Masquerade – Bloodhunt.

Many were expecting the long-announced sequel to the aforementioned Vampire: The Masquerade – Bloodlines game, but that has seemingly stalled into oblivion. This February, publisher Paradox Interactive announced that it was taking developer Hardsuit Labs off the project, after they’d worked on the game for a couple years. There have been no new updates since then and instead a very different kind of game has been announced: a free-to-play battle royale focused entirely on multiplayer.

That’s not a move that inspires confidence, especially as battle royale has increasingly become the battle cry genre for those that are looking to have a last throw of the dice – with the likes of Battlefield 2042 and Halo Infinite refusing to play copycat. It’s not 2017 anymore. While the gaming landscape is dominated by Fortnite and Call Of Duty: Warzone the genre is just as much defined by the failed battle royale projects left in their wake. Battle royale feels too established, its market too cornered for new projects to make any serious headway in 2021.

However, with all that doom and gloom pre-facing, having taken part in the Bloodhunt closed alpha this weekend, it’s clear there is something there. While it has work to do to find itself, there is something Bloodhunt has that is ever-rare in the genre: a spark of uniqueness.

To start, Bloodhunt is a much smaller affair than other popular battle royales. It sports 45 player lobbies, making for more intimacy in its player vs. player worlds. You can go it alone or in a three-player team, as you try to whittle down the competition, find guns and armour, and unlock passive perks. You’ll fight vampires with abilities and weapons until one is left. Fairly basic battle royale stuff.

At the start of the match, you get the choice of six different vampires to play as, each bringing different abilities and vibes. There are information gathering vampires, healing vampires, brawler vampires, utility vampires, and more. There is even a vampire that is so beautiful that they literally blind other players.

This adds a slight role-playing element to your play, which is built upon in the moment-to-moment action. The most interesting parts of Bloodhunt is how it tries to incorporate the broader Vampire: The Masquerade brand into a battle royale setting. The ‘masquerade’ portion of the franchise refers to vampires trying to remain undiscovered by the mortal populace, for their own safety. Due to that, you don’t want to be discovered by the non-player characters who populate the world.

At times, it will benefit you to become a predator and eat passers-by, especially those with certain kinds of blood. If you feast upon the general population, at least the ones who show up as having passive perks when you ping for information, you will get stronger. However, if you kill a human in front of another it will count as you betraying the masquerade, and highlight you on the map for all other vampires to see.

The traversal also feels great and is a real highlight. Many of the classes include an evasive or movement ability and all classes can bound up the side of any building in the game, unlocking a huge amount of verticality on the map. It allows for some tense fights, as you chase and leap from rooftops to dark alleys on the ground within the same sequence. It makes fights on the map feel distinctly dynamic, at least in their movement, and it doesn’t quite feel like anything else in the genre.

The reason Bloodhunt feels so unique is that it gives the distinct impression of being repurposed from a single-player game. The map doesn’t feel like a series of multiplayer arenas that are directing players to hotspots of loot or points of interest; it’s more reminiscent of a sparsely realised open world from a role-playing game. In some ways, the whole game is reminiscent of that period in the early 10s when single-player focused games were forced to have a janky multiplayer mode tacked on.

Sharkmob hasn’t quite nailed it yet, but Bloodhunt feels like it could be something with a lot of iteration. If those multiplayer modes from older single-player games – the likes of Assassin’s Creed: Brotherhood and Tomb Raider – had been expanded on with a dedicated team they could have grown into something better, and that seems like the promise of Bloodhunt.

However, it has work to do. The general combat is fine, but that’s about it. It doesn’t feel great to shoot, creating a rather unremarkable combat experience. It also doesn’t feel very vampire-y to shoot someone with an AK-47. It’s not impossible to integrate a machinegun with being a powerful supernatural being, but it just feels like there is a bit of pageantry missing to really tie together the experience.

That unceremonious nature extends to the general feel of the game. To start, you choose a place on the map and, after a mess of checks and menus, you will eventually be placed where you chose. It’s all very sudden and if you are unlucky and another player who spawned close by picks up a gun before you, your game is over. This is pretty universal in battle royales – sometimes you just get unlucky with your drop. However, the missing animation of an actual drop, as well as the menu-based entry into the game, feels very insubstantial.

That’s marred further as you can spawn on the map, be murdered very quickly, and then have to wait several minutes to find the next session – due to the amount the game wants to confirm with you before spawning. Even after finding a match, it’s a long process as you confirm which class you want to play as, where on the map you want to spawn, and other small checks; it just makes the matchmaking portion of the game way less fluid than it should be.

However, this is a closed alpha, and it would be unfair to imply the presentation is final. Overall, it is a little bereft of life though, which given the undead theme is perhaps fitting. Like a recently converted vampire, this franchise feels a little lost, not sure what to do with itself and trying to figure out its new world, reality, and form. However, also like a newly converted vampire, if it can figure out these things and grow stronger, there is a lot of potential here.

If Bloodhunt doubles down on its odder elements, like the role-playing style infusion and mobility innovations, it could flourish. If it instead doubles down on the mediocre gunplay, and becomes a more traditional battle royale experience, then it’s likely to be quickly ignored and forgotten. After the alpha that puts it at a crossroads, with everything at stake if it makes the wrong choices.


MORE : Vampire: The Masquerade – Bloodlines 2 narrative lead says being fired was a ‘shock’