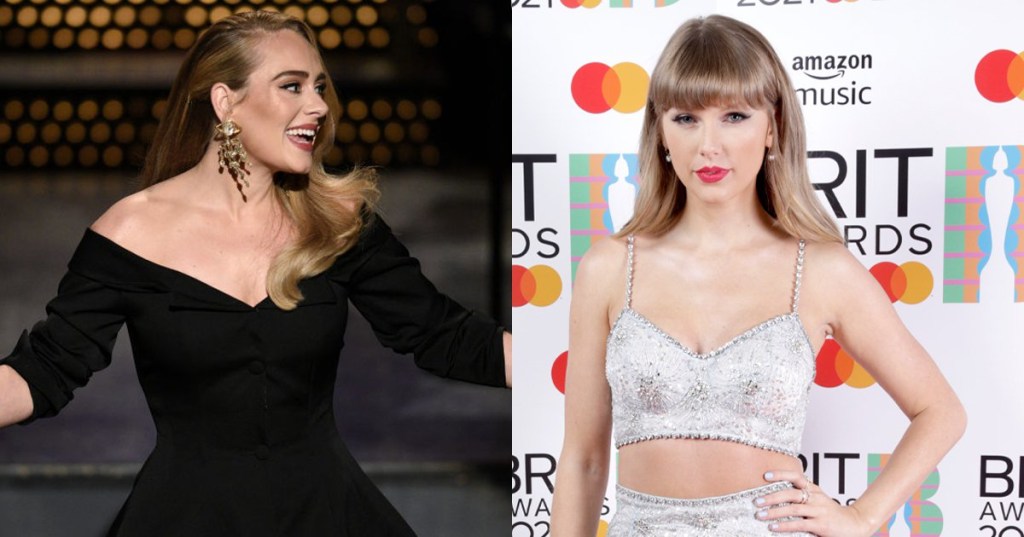 Taylor Swift and Adele fans could be onto something – they think they’ve exposed an upcoming secret collaboration between the world famous singers.

A screenshot from the Society of European Stage Authors and Composers (SESAC) shows the pop stars are registered together on a song called Broken Hearts, according to a fan.

The track is also listed under the title of Shattered Hearts.

The SwiftNYC Twitter account shared an image showing the information, writing: ‘A song called “Broken Hearts” has been registered via @sesac, written by Adele and Taylor Swift! It is rumored to be on the RED #TaylorsVersion album.’

The singer, 31, has been busy re-recording the albums she released with her previous label, Big Machine, after she was caught up in a high-profile dispute over the ownership of her master recordings with Scooter Braun.

Taylor already released the new version of her second studio album Fearless back in April, which featured rerecorded versions of the tracks alongside six previously unreleased songs taken ‘from the vault’.

Fans had been left guessing over which album was set to be released next, and many had assumed it would be Taylor’s fifth effort, 1989, after she previously teased a snippet of a new version of the album’s track Wildest Dreams.

However, it looks as of many Swifties were wrong, as Red will be the next to be dropped.

Red was first released back in 2012, and includes hits such as We Are Never Ever Getting Back Together, I Knew You Were Trouble and 22.

Across social media, Taylor shared the artwork for the new version of the record, and revealed that alongside the original album’s songs, there will also be previously unreleased material, including a 10-minute version of one of the tracks.

This song is highly speculated to be fan favourite All Too Well, after Taylor previously revealed the song was originally a 10-minute demo before it was edited down to five minutes.

In a lengthy statement, she wrote: ‘Musically and lyrically, Red resembled a heartbroken person. It was all over the place, a fractured mosaic of feelings that somehow all fit together in the end. Happy, free, confused, lonely, devastated, euphoric, wild, and tortured by memories past.

‘Like trying on pieces of a new life, I went into the studio and experimented with different sounds and collaborators. And I’m not sure if it was pouring my thoughts into this album, hearing thousands of your voices sing the lyrics back to me in passionate solidarity, or if it was simply time, but something healed along the way.

Zendaya and Tom Holland caught kissing as they confirm romance

Amber Heard reveals she had a baby in April: ‘She is the beginning of the rest of my life’

‘Sometimes you need to talk it over (over and over and over) for it to ever really be…. Over. Like your friend who calls you in the middle of the night going on and on about their ex, I just couldn’t stop writing.’

She added: ‘This will be the first time you hear all 30 songs that were meant to go on Red. And hey, one of them is even ten minutes long.’


MORE : Cardi B almost got a huge face tattoo when she was 16 but is ‘thankful everyday’ that she didn’t