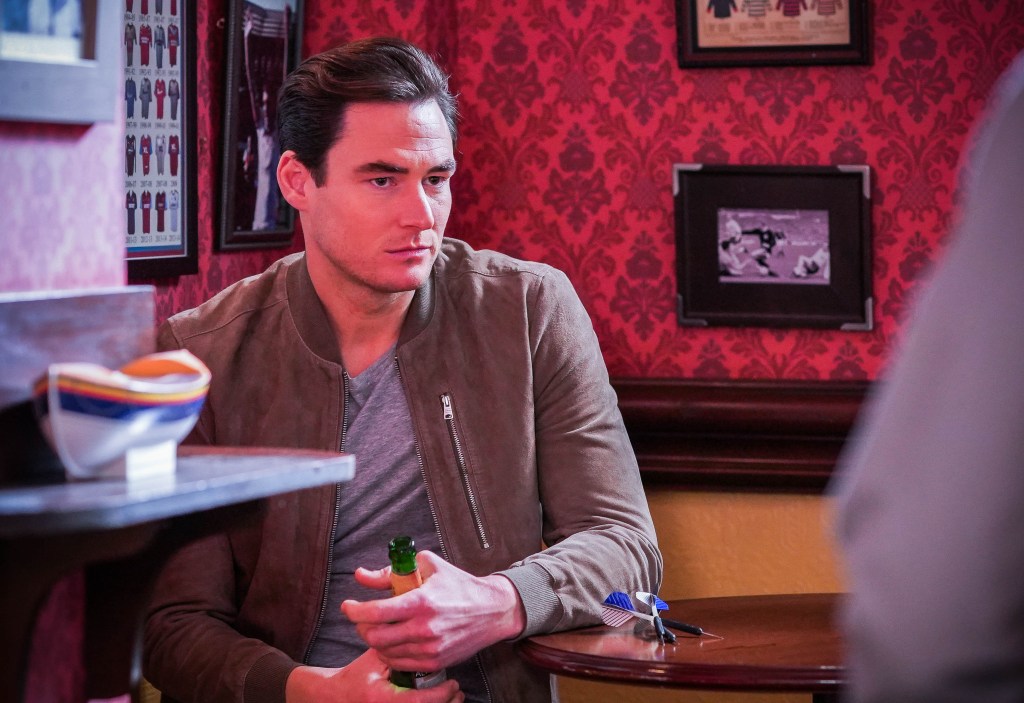 Zack Hudson certainly caused a stir when he arrived at the funeral of his late dad Gavin in EastEnders – but now that Sharon Watts (Letitia Dean) has welcomed him into her life, things have been going smooth for him for possibly the first time in his life.

Until next week. Here, actor James Farrar lifts the lid on Zack’s crisis as Nancy Carter (Maddy Hill) is left for dead, what is ahead for the storyline and his luck at working alongside Letita Dean and the Carters.

How do you feel you have settled in – was it deliberate that Zack has been bedded in subtly?

I think it was probably purposeful that he had a dramatic entrance and then slowly and surely I would get bigger storylines rather than straight away. It allowed me to bed in and I have really deep relationships with the people I work with. I have worked with Tish from the start and now the Carters.

We created a bubble, me, Maddy and Rose – it was the first time I’d been so close to actors since the start of the pandemic. I hope you will see it in the episodes, those bonds will come over on screen.

They are both fantastic, aren’t they?

I have a lot in common with Maddy and Rose is so inspiring and I’ve learnt a lot from her. Danny tuaught me a lot, so did Kellie – each one of the family has been so open and welcoming. And I will tell the world how much Tish means to me.

All of these actors are just so generous. I think I’ve lucked out! Maybe someone has an eye for it, I pinch myself when I see who I am working with each day. When’s it going to happen when I work with someone I don’t like!?

How does he feel about Frankie?

I think that Frankie is starting to have eyes for Zack but unfortunately, his eyes are for Nancy – but the problem there is it’s unreciprocated. He’s a loveable rogue and that kind of guy might just follow impulse rather than his heart. That leads to the accident and then the guilt that that brings – it will either bring Frankie and Zack closer or drive them apart. Also Zack’s feelings that he might have killed someone who he has strong feelings for also plays into that

How does Zack react in the moment after Nancy is hit?

The panic leads to out of character actions. He’s quite courageous but he decides to cover it up to help others, actually – to protect Frankie and not ruin the Carter family dynamic. In true EastEnders form, it will create a huge rift between Zack and the Carters.

When she inevitably finds out about the cover up, could Nancy forgive Zack?

It’s difficult – I think she will feel hate but also love. If I had hurt someone in the past and they choose to forgive me, I know it’s unconditional love. Zack has never had that himself; his mum or dad never loved him fully and he has problems with trust.

He is always looking out for others but when it comes to creating any kind of deep bonds, he has real issues with people leaving him or not loving him. People leave him and don’t give him a chance – Sharon letting him back in is really sweet but whether Nancy could do the same…

Oh, certainly! You’d think he’d learn from mistakes but I promise you, he doesn’t. Other the next few months he will make it sure. Usually he manages to get himself out of situations but this one I think he has next to no chance

His past plays a part in this – could it be a good theory he has had to do something like this before?

Yes. In short! He has experienced loss, run ins with the law an he’s a jack the lad but usually he hasn’t been emotionally connected. This time, he has strong feelings for the person that he has hit with a car and hospitalised.

It would be obvious to have brought Zack in as a gangster or an out and out villain? Do you prefer that he has layers?

I love it, it’s such a contradiction. Many of my characters in the past have been gangsters but the true ones for me are ones with vulnerability. Gangsters with big, dark secrets, there have to have an underlying forgiveness or you can’t invest. This time, he hasn’t done anything that bad yet except punching Kheerat.

He has created a bond with Martin, he once this brotherhood and someone who will have his back – unconditional love that he has never had at the past. He has come from a background where there was a lot of trauma so he makes mistakes and he needs people around him to guide him through – Sharon, Nancy and Martin are such an important network.

Everyone needs a partner, whether a boyfriend, girlfriend, parent, best friend. He’s very vulnerable – he reminds me of a boy at his first day of school asking people to be his friend.