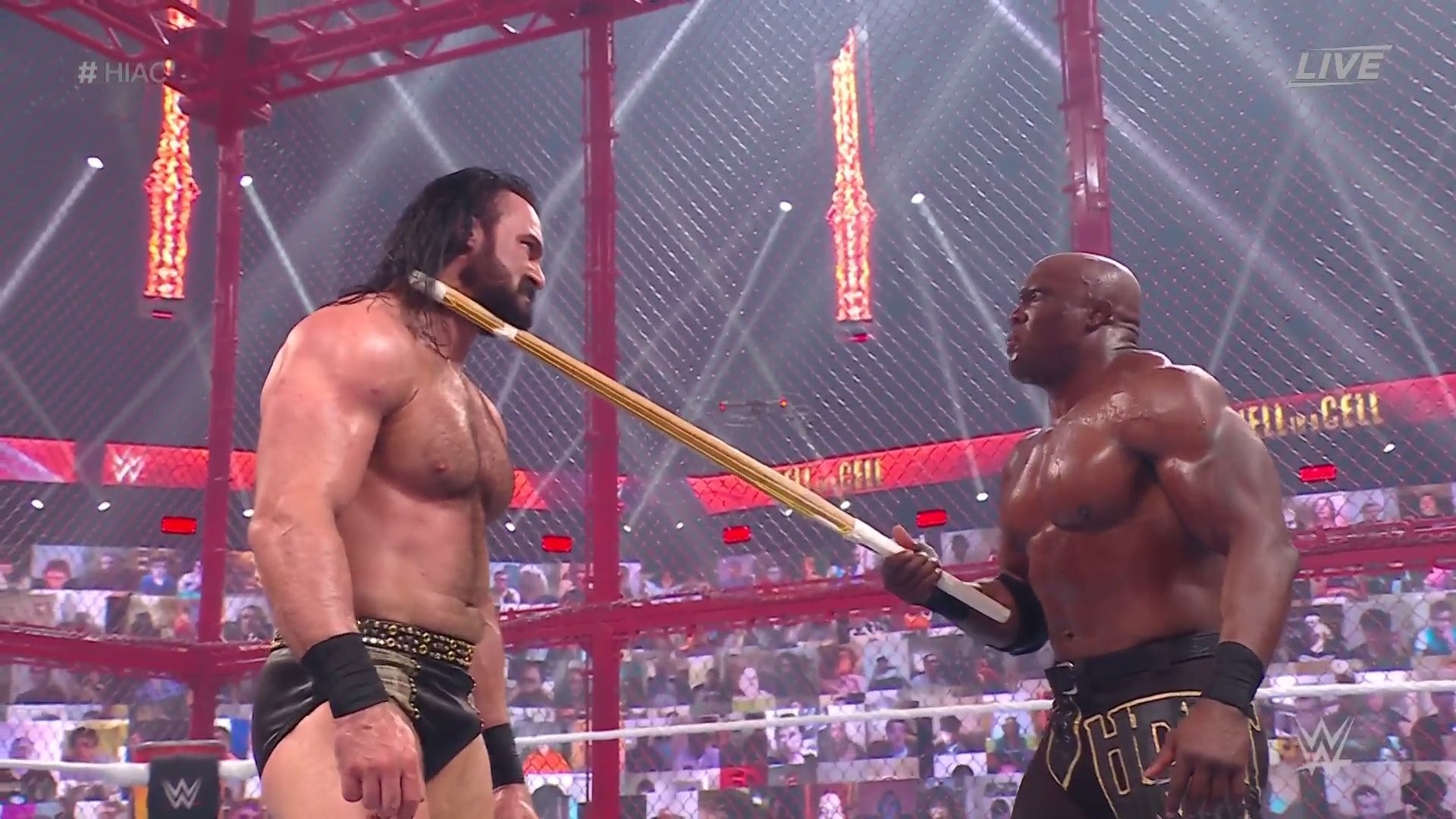 WWE Champion Bobby Lashley stole a win from Drew McIntyre in a brutal main event at Hell In A Cell.

Under the terms of the match, the Scotsman now can’t challenge for Raw’s top prize as long as the All Mighty holds the gold.

The two heavyweights went to war inside WWE’s most feared structure, bringing the intense level of violence fans have come to expect from this match.

This was the company’s final pay-per-view of the ThunderDome era before fans return at July’s Money In The Bank, and it’s a clean sweep for fantastic monthly events.

Lashley and McIntyre topped off a fantastic show with a layered and intense clash, both men bruised by the end after using tables, chairs, kendo sticks and more to take each other out.

It was every inch the fight fans wanted, with MVP also getting the beating his character deserved.

The ending itself was a shame, with MVP stopping McIntyre from winning and causing enough of a distraction for Lashley to win with a roll-up.

It shouldn’t take anything away from the match though, and it can’t be overstated how much punishment these men took inside the steel.

After recent events on Raw, WWE could do worse than moving Lashley onto Kofi Kingston in time for Money In The Bank, before what could be a date with Brock Lesnar at SummerSlam.

As for Drew, it’ll be interesting to see where he goes from here given he’ll have to take an enforced break from the title picture.

Bianca Belair and Bayley set a very high bar for the rest of the night as they opening the show inside Hell In A Cell.

The EST of WWE and the Role Model delivered in a big way here, with some exciting and innovative action before Belair hit the KOD onto a ladder to retain the SmackDown Women’s Title.

Special mention has to go to Pat McAfee’s commentary, as he added to the action perfectly with the infectious enthusiasm which has typified his run on the blue brand thus far.

We headed to Alexa’s Playground as Bliss hyped up her own fight with Shayna Baszler, telling people to expect the unexpected and insisting when someone knocks on her door, you don’t know who or what will answer.

There was no UFO at Hell In A Cell, but Cesaro and Seth Rollins may well have exceeded their WrestleMania 37 clinic with an incredible third chapter to their in-ring rivalry.

The Swiss Superman and Drip King absolutely nailed it here, with the latter getting a quick roll-up to steal the win while allowing Cesaro to still remain strong.

Alexa Bliss and Shayna Baszler was – by and large – a more straight up match than everyone was expecting going in.

The two women worked a good pace and an entertaining bout, with Bliss’ powers kept to a minimum as she locked eyes with Nia Jax to make her attack Reginald, and put the Queen of Spades away with the modified Sister Abigail.

Even with their long, storied history together, Sami Zayn and Kevin Owens found a way to deliver something new as they took the physicality to another level with the latest battle between them.

A bloody Zayn getting a much-needed win was the right call, but KO – selling both a shoulder injury and his throat after Commander Azeez’s attack on Friday night – doesn’t come out of this looking too bad at all.

Rhea Ripley finally came close to the standard that made her a favourite with fans during a great match with Charlotte Flair.

The Nightmare retained her title when she took a DQ loss and cracked the Queen with the announce table covering, standing tall after a post-match scuffle.

WWE Hell In A Cell results and grades